Like the evangelists say, “You can’t be saved unless you are a sinner“.

Those on the inside track know how the Philippines managed to secure its position on the UN Human Rights Council among 18 renown human rights violators. It’s a trap. Those countries who are members must meet a higher standard of human rights. 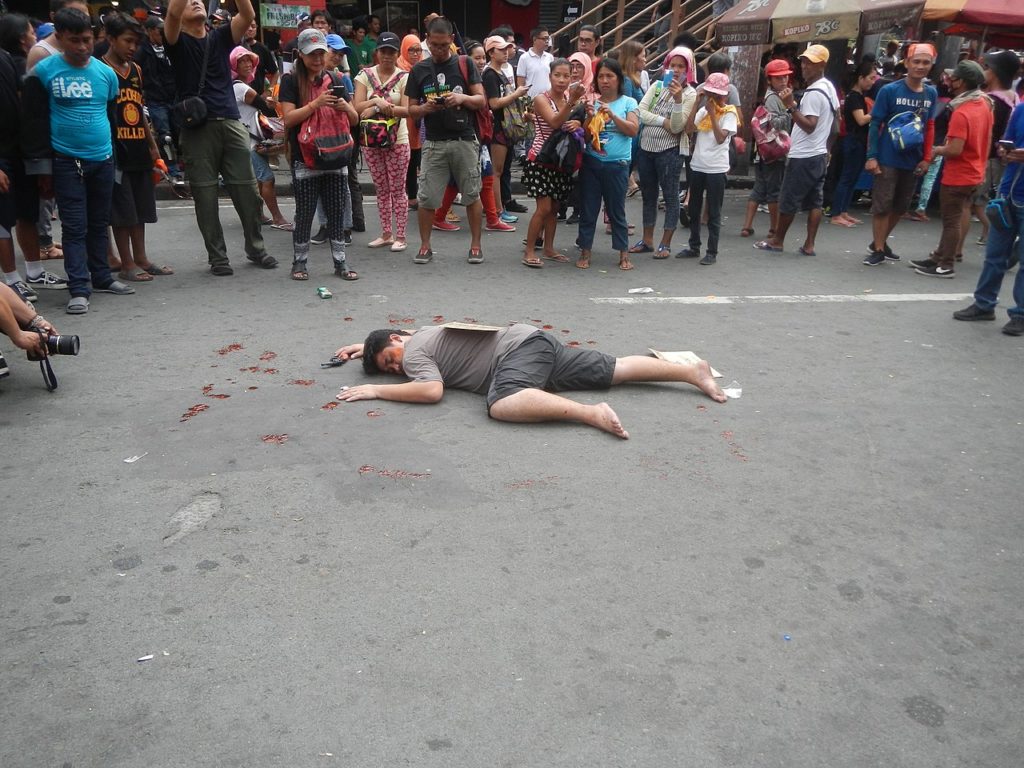 Demonstrator reenacts what the Philippines extrajudicial killings look like. Writing on the cardboard placed on the body says the person was a drug user hence he must be killed. This is typically used in the crime allegedly related to drugs since Rodrigo Duterte was inaugurated as the president. Photo Credit: Judge Florentino Floro

Murder by the Philippines government is done in arrogant fashion, even in front of closed circuit TV cameras. Duterte’s former Justice Minister said killing Filipinos suspected of using marijuana or shabu is not a crime against humanity because drug users are not human.

In ridiculous vote devoid of competition, UN General Assembly elected #Philippines, #Eritrea, #Bahrain & #Cameroon to be among new members of @UN #HumanRights Council in 2019-2021. Such votes make mockery of word “election”. Recall that in 2016, #Russia lost thanks to competition pic.twitter.com/YBEWr5AiQu

International Rule of Law May Some Day Resume

What these countries miss in this dubious achievement is that they now face a requirement to meet a higher standard of human rights values. Failure to do so puts them in a position of breach of global trust, a higher crime than the ordinary human rights violator.

Some day, international law will have some meaning. At that time, there will be regret on the part of violators who do not realize that there is no statute of limitations on crimes against humanity.

Sitting in a ramshackle bar in Tuba, Philippines, a martial arts instructor who identified himself only as Bernard, commented, “these politicians like Salvador Panelo don’t realize that when they justify killing 25,000 of our people by vigilantes they inspire anarchy and that could mean that some of us citizens may just turn around and put them politicians on the list deserving a bullet in their head.”

Salvador Panelo apparently riled the locals with a rather slippery-slope statement considering that it draws more attention to the fact he works for a President who is under a serious investigation on numerous complaints of mass murder and hence violates the President’s right to remain silent. Duterte’s rights have been violated. That is a serious violation of human rights considering that these men are in the trust of ailing, aging President Rodrigo Duterte whom they betray.

Philippine National Police (PNP) documents obtained by Rappler indicate about two years – from July 1, 2016, up to June 11, 2018 – Philippines police have recorded 23,518 Homicide Cases Under Investigation (HCUI), equivalent to an average of 33 people killed a day.

An aggregate of cadavers subjected to violence causing death at morgues and mortuaries, information available to medical professionals and public health officials indicates,  however, that unexplained violent deaths exceed the PNP number and are well over 30,000.

Panelo’s statement implies that this is “OK” with the United Nations but Time Magazine says observers see it as Duterte killing opponents.

“With the county’s [Philippines] re-election, the President’s campaign against illegal drugs, corruption, and criminality has, in effect, been acknowledged by the international community as essential to the protection of the right to life, liberty and property of every peace-loving and law-abiding citizen of our State.”

Not everyone agrees with these lies. US Ambassador to the UN scorched this manner of thinking and speaking.

Rodrigo Duterte is a smart President but he makes a mistake like in “Peter’s Principal” of surrounding himself with idiots whom he thinks can’t  usurp him.

The Philippines’ President is a wise man. Duterte kills mayors who are politicians (ick) in the Philippines, hence corrupt, and who likes corrupt politicians; he kills priests who have a bad reputation for diddling children (ick) and driving around in fancy cars when nobody in their parish can afford a bicycle (ick); and he kills impoverished drug users (cheap drugs cheaper than whisky) whom nobody in the world finds popular except maybe the Canadians whose  country will be emitting aromatic intoxicating fumes like a raging marijuana forest fire tomorrow.

“This lack of standards continues to undermine the organisation and demonstrates again why the United States was right to withdraw from it [UN Human Rights Council] earlier this year.” said Nikki Haley, US Ambassador to the United Nations.

Haley added that, “The United States will continue to support reforms that would make the Human Rights Council credible.”

The US has quit the UNHRC and it’s ambassador has suddenly left the UN.

The Philippines proudly joins Somalia, Bangladesh, Eritrea, Bahrain, and Cameroon as nations with the most horrid human rights violations, on the UNHRC. The group succeeded by flooding the candidate process with more nominees than there are seats.

Most of the world is aware of the mayors, priests, journos and ordinary civilians being gunned down in the Philippines as recently as yesterday.

The International Criminal Court has an ongoing preliminary examination of the situation in the Philippines, based on hundreds of complaints. The examination was announced on 8 February 2018. The ICC says it will analyse crimes allegedly committed in this state party since at least 1 July 2016, in the context of the “war on drugs” campaign launched by the Government of the Philippines which is under one-man-rule.

“The problem with telling lies to the public in the Philippines about such things as the Somalia, Bangladesh, Eritrea, Bahrain, and Cameroon additions to the UN Human Rights Council, is that people in the rural provinces believe the lies and feel hopeless,” said a women I interviewed on Marcos Highway.