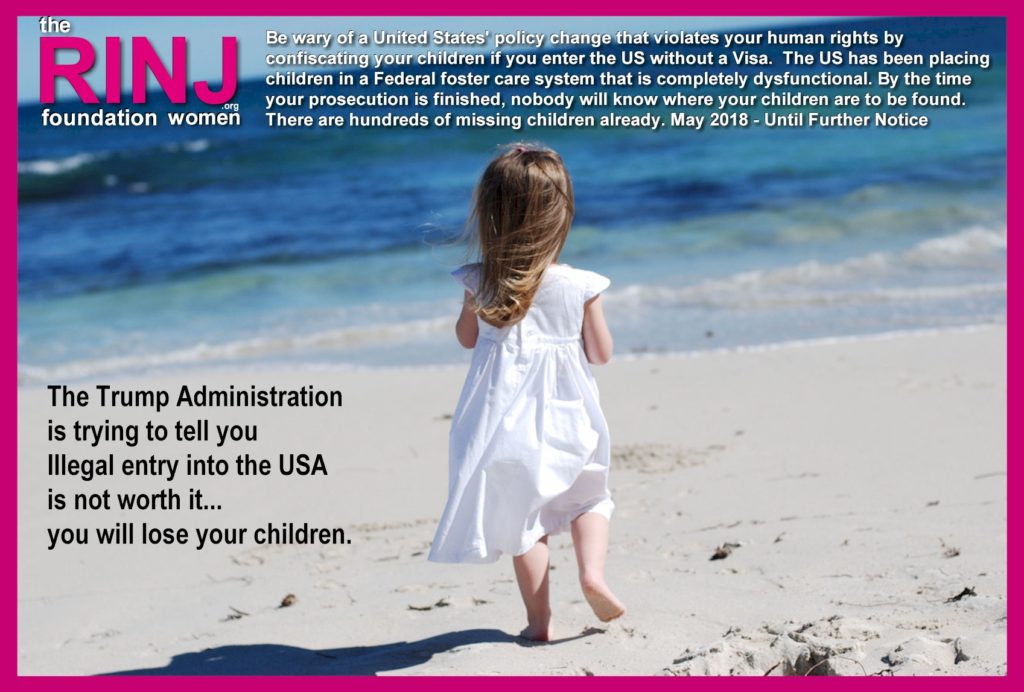 At all times the whereabouts of every child should be known and accounted for by their family or surrogate caregiver.

While the world hears many problems posed by upwards from 60 million displaced persons in the world, and the migration issues at borders, the United States has slammed the door on immigration/migration/refugees and for those people who try to enter the country illegally with children, the US confiscates the children and apparently ‘loses them’.

When the migrants go to court to begin their long arduous process of criminal prosecution and ask the whereabouts of their children, nobody knows the answer.  See Tucson.com May 24 Update

On May 15, USA Homeland Security Secretary Kirstjen Nielsen was defending her Homeland Security’s policy that separates children from their families when the parents are taken into custody as migrants alleged to have illegally entered the USA.

Nielsen, testifying before the USA Senate Homeland Security and Governmental Affairs Committee, was challenged with an allegation that President Trump had ordered the separations as a tool to discourage illegal immigration. It begins to make sense that is what happened. But as Michael H. Cohen can tell you, trying to please Donald Trump can put you on the wrong side of a criminal investigation.
“My decision has been that anyone who breaks the law will be prosecuted,” she said.
“If you are parent, or you’re a single person or if you happen to have a family, if you cross between the ports of entry we will refer you for prosecution. You have broken U.S. law,” says Homeland Security Secretary Kirstjen Nielsen.

Nielsen said the children are transferred to the custody of Health and Human Services officials within two days.

Nielsen said the children of parents being prosecuted across the nation for non-immigration crimes are separated from their families “every day.”

But, on April 26 HHS already established for the record that it did not know where the children were. Thay had lost many. Others were hard to find.

Steven Wagner Acting Assistant Secretary (Administration) for Children and Families U.S. Department of Health and Human Services told the Permanent Subcommittee on Investigations Committee on Homeland Security and Governmental Affairs of the United States Senate that:

Hence, while the FBI is doing  solid work prosecuting child-sex-slave traders  like Michael Clemens, Homeland Security under a White House initiative is stealing children from desperate migrants and pouring thousands into so-called Foster Homes that the HHS cannot find.

Somehow  Donald Trump feels he is above Human Rights law. We have noticed that in this matter The RINJ Foundation Women are not alone at being extremely alarmed at this unlawful, cruel and immoral conduct, but people like California Sen. Kamala Harris have vigorously raised a flag on this violation of Article 5 of the Universal Declaration of Human Rights. She was brow-beaten by one of Trump’s minions hence there seems to be no remedy in law within the United States the matter will be raised with The Office of the High Commissioner for Human Rights (OHCHR) by the RINJ Civil society Group.

Article 5. Universal-declaration-of-human-rights
No one shall be subjected to torture or to cruel, inhuman or degrading treatment or punishment.

This would be a good time to fix this problem, and reunite these families. If there needs to be detention for migrants, then detention, as in other countries, must by family-suitable. 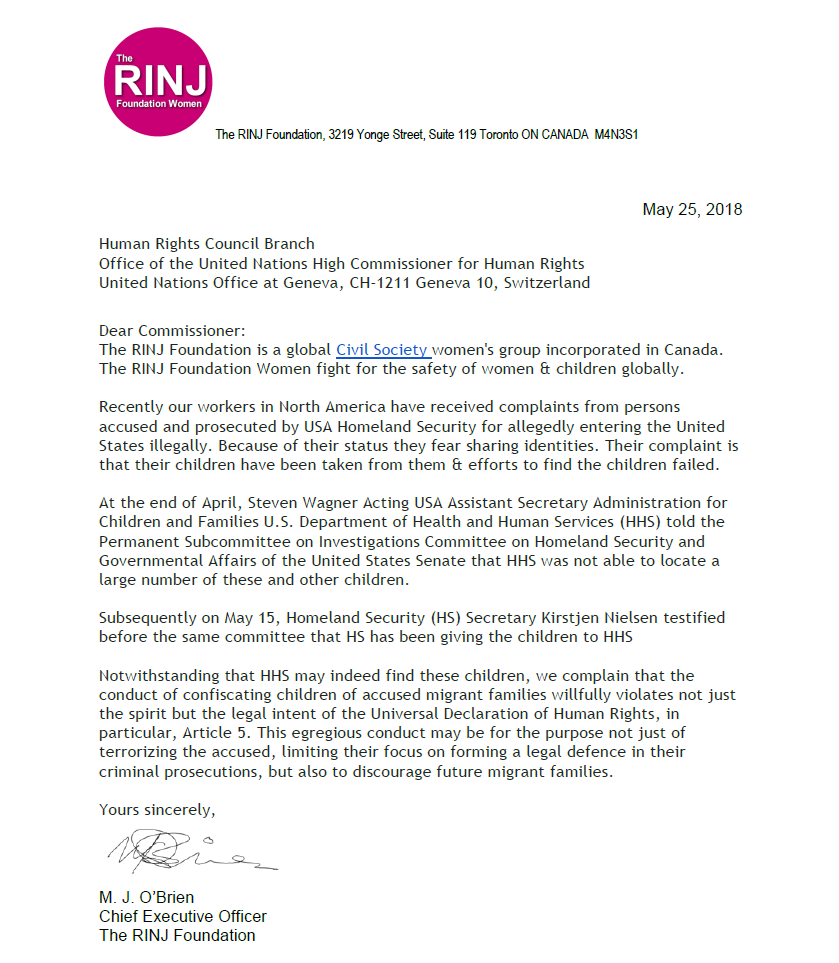 The RINJ Foundation Women filed a complaint with the OHCHR, yesterday.