Sabrina Meng May Acquiesce to Extradition

News Update and Explainer on the Meng Wanzhou Case:

Canada reached up and punched a friendly giant in the crotch. America seems to be laughing and China is going to flatten Canada in the coming years. Sources in the US DoJ did not expect this to get past the Canadian Justice Minister. Bets were lost, apparently.

Don’t expect a punch in the face or anything that instant. The arrest of two Canadians has been done as a matter of course. The arrests were previously delayed in an interest to keep peace with Canada while trade talks were underway. That is what our sources in Beijing and elsewhere say.

Heretofore these individuals China has arrested and Canada claims is a tit for tat exercise have appeared to Chinese law enforcement last year and even earlier in one case as scofflaws who disagree with Chinese law and subsequently break the laws in order to make money for themselves by bending or breaking rules.

In one case a man is in China to obtain defamatory information against China and sell that information to the Anglosphere. No matter the good intentions, this can be prosecuted. China has a law not unlike many Asian countries that discourages defamation by foreign visitors.

It is called an “anti-disparaging condition of entry“ and it can be applied even to journalists, in fact that happened recently in Myanmar, but it is intended to prevent foreigners from entering a country and doing real harm to citizens, with impunity once they leave. That too often has happened so the law makes sense if applied correctly. In Myanmar it was not applied correctly and a heinous injustice done to hide crimes against humanity occurred.

Mr. Xi Jinping will likely take a page out of  the handbook of his friend, Philippines President Rodrigo Duterte who avoids making martyrs of annoying guests by revoking visas and escorting the parties immediately to their flight out of the country. President Jinping would perhaps see the vast diplomacy benefits in that process and Mr. Duterte would perhaps see the flattery in that.

The RINJ Foundation, a global civil society women’s rights group according to its recent statements, believes that Ms. Meng was singled out as a high profile target in an extensive lawfare attack on China that seeks to stifle China’s innovations in a global competition to excel in the next level of mobile phone communications called “5G“.

RINJ Has Years of Experience in China

One of the founding directors of The RINJ Foundation is a Chinese woman from Shenzhen, China. Focus on the rights of the individual in China caused her to teach all directors and workers how to help the process of change in China. Climbing the wall and slinging arrows into the Great China does not have a good effect. Diplomatic solutions are the incipient stage of getting a good result. Mr. Trudeau has as much as said that. 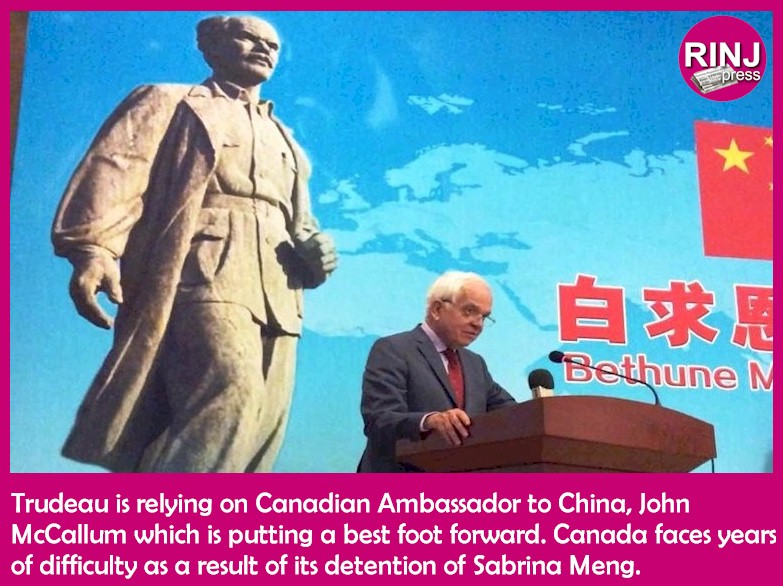 RINJ tried to change notions that are thousands of years old. Or in the case of communist ideals, not so many years ago. However the Communist ideals are deeply embedded by powerful brainwashing techniques. Fortunately the young Chinese are amazing people with a rebellious nature and a thirst for real knowledge. They have formed a core group of Millennials who are willing to accept new tolerances for different ways. If they are not jaded by misdeeds of the anglosphere, they will make a difference as they age and rise to power.

Notwithstanding that hopefulness, if the West continues its launch of lawfare and trade warfare, the work of civil society in China will be lost. China has been mistreated for a long time. How do you expect a giant to atc when you keep punching him?

RINJ foundation workers of Chinese descent have worked for years on human rights issues in China. RINJ has some horrifying allegations it has made against China without any help from anyone. Folks like those in the US DoJ and the Canadian Justice Department just chuckle at the women fighting for the safety of women and children around the world when they claim that, “women were rounded up by Chinese ‘authorities’ and taken into captivity where they have been held and raped and abused.”

Unbound by laws for foreigners, many RINJ women are indeed Chinese citizens who have done remarkable humanitarian action work from inside and outside China. Change is happening slowly.

Trudeau Knows that his story is a lie. That is a very big disappointment.

Detaining Sabrina Meng is a political move against China. Trudeau should fire the fool advisors who arrived at this strategy to tell Canadians a lie that this is not a political move against China but instead claim repeatedly that this “is just how the law works”. Wrong. This is a catastrophic abuse of process characteristic of longtime US behaviours and Canada’s more recent copycat conduct.

The Meng case was decided by strategic intelligence officials of the Five Eyes group working with the US Department of Justice on a campaign against China. Trump approved but did not hold out for a big result. Then he got it and used it as a bargaining chip effectively holding Ms. Meng for ransom.

Justin Trudeau knows that to be true because he was at the meeting of intelligence officials near Truro Nova Scotia on 17 July when this was finally decided after many heated discussions and many meetings. He certainly heard Trump’s statement as well.

If he had said something like, ‘Canada is fed up with China’s misconduct like hacking the National Research Council and stealing years of data from the Marriott Hotel chain so we think we can lever them to stop,’ the parties would be in a lower level of conflict. But kidnapping China Princess Meng is a war declaration.

Meng may not have known Skycom’s Ownership was in dispute.

Ren Zhengfei, the father of Sabrina Meng is a crafty person who was trained for life by the Chinese Army. After leaving the Army he founded Huawei Technologies and took it to its current $100 Billion annual status today. That is nothing unusual in this sector. Look around and you will see huge buildings and sports centers named for cell phone companies. One example is the Toronto Rogers Centre, originally named SkyDome. These types of companies make mega billions selling airwaves and airwaves devices to the population.

Mr. Zhengfei is reportedly a good friend of Chinese President Xi Jinping. He has three daughters including Sabrina Meng. He is not a hands on manager of Huawei but in the past has made strategic calls including those related to the sale of “Skycom” which the US claims Ms. Meng has lied about. But she would not have known.

Sabrina Meng is the daughter of Mr. Zhengfei and fathers in China don’t tell daughters anything.

The US DoJ using bank fraud statutes (18 U.S.C. § 1344)  to arrest and extradite Ms. Meng Wanzhou is as possible and legal as nailing children for spitting on the side walk or urinating in the bushes of public property like a park. Young teens in the United States have been given sentences of years in jail for these crimes.

In the use of 18 U.S.C. § 1344), any known-to-be-wrong statement to a bank in an attempt to get a mortgage, college or university loan, car loan, or a loan to pay the baby’s surgery bills or cancer treatment, a person could be sentenced to serve 30 years in prison for each lie. But the prosecutor must prove that beyond a reasonable doubt, Ms. Meng know all about the legion of changes in Skycom shere structuring from 2009 through 2013 when she made a powerpoint presentation to HSBC  which in 2012 was in the ropes with the USA for sanctions busting.

In 2012, HSBC banks settled with the USA by paying a 1.4 billion fine and by agreeing to try and set up Huawei. It did. HSBC is an FBI/CIA shared snitch.

But the best they could get is a power point presentation made up by Huawei’s CEO floating chairman Richard Yu Chengdong or someone else under the direction of  CEO Ren Zhengfei.

For the United States which has a mixed private/state-run penal system that houses more of its own country’s population than any nation on earth, the bank fraud law is a panacea. But for stopping the global misconduct of Chinese actors, it is a waste of time and taxpayers money and reveals a desperate fear and lack of understanding of Asia.

Ms. Meng may waive extradition hearing on a deal, then defeat the charge in New York.

It is possible, maybe even likely that Ms. Weng will waive extradition proceedings on the condition of a speedy trial and no further charges and defeat the US allegation.