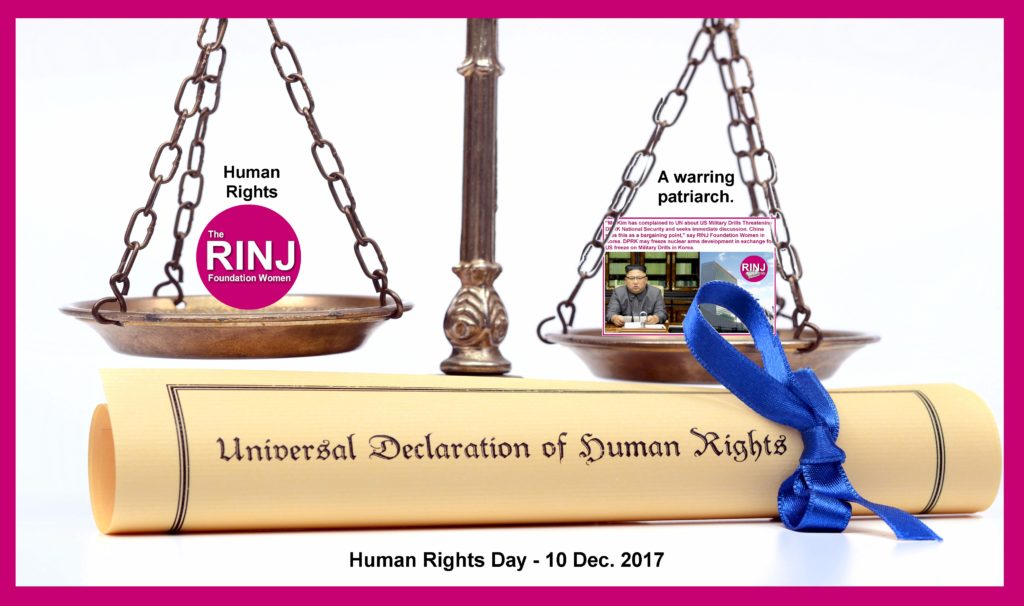 In a statement which appears to respond to complaints that the UN Security Council sanctions have been starving ordinary people in the People’s Republic of Korea (DPRK), that body denies any intent to harm North Korean civilians.

It is likely safe to say that all of Civil Society wishes that denial to be real. Some starvation-mitigation efforts are being made by UN Humanitarians but that effort is financially broke.

Despite a complete Naval Blockade of North Korea, which Pyongyang claims is an act of aggression citing the Convention-for-the-Definition-of-Aggression-1933, the UN Security Council  somewhat disingenuously says that the “primary responsibility to protect the people in the Democratic People’s Republic of Korea lies with the Government of the Democratic People’s Republic of Korea”.

That would seem conflicted with the Naval Blockade that the USA uses to deny the DPRK government food, medicine and oil with which it might have used to “protect the people in the Democratic People’s Republic of Korea”.

The UN Security Council which in this matter has been driven by a national leader whose diplomacy includes outrageous threats of “fire and fury”, “total destruction” and personal name calling has no credibility and is now entirely suspect.

The RINJ Foundation women urge calm and insist that global leaders seek a meaningful dialogue with North Korea to avert Nuclear War and to mitigate the extreme harm being brought to the ordinary people of the DPRK, no matter who is to be blamed for the hundreds of thousands of famine casualties.

The RINJ Foundation women proposed last September (See: WireService.ca Media Release (09/30/2017) Toronto, ON) that Canada play a role in bartering a peace. That would be fitting because the tireless Canadian efforts in 1953 to negotiate a peace treaty between the parties to Korean War that began in 1950 were frustrated by a jingoistic American administration and the Korean war effectively never ended leaving the world with the nuclear standoff it endures today.

Canadian foreign affairs Minister Chrystia Freeland will soon convene a ‘global diplomacy’ meeting in Vancouver as a result of the aforementioned suggestions which were well received ‘in concept’ by UN members in the European Union and in Asia.

It may be true but we’ll never know if the people of North Korea would have long ago usurped the criminal tyranny of the Kim regime if the global community and the Kim regime had not forced the population into subsistence living. For decades every day is a struggle for survival with no time or energy for revolution or regime change. That’s the Kims’ oppressive way and the UN Security Council has been unwittingly used as a tool of this Kim-dynasty oppression.

Security Council has no Impunity for Crimes Against Humanity

According to the RINJ Foundation’s CEO, the UN Security Council claim of impunity by blaming the DPRK seems disingenuous in the historical context. It also seems like a classic case of “familiarity breeds contempt”.

The war between the United States and North Korea continues and both actors behave like nations at war.

The UN Security Council does not represent the UN General Assembly in taking sides with one or the other actors in disputes. In the DPRK/USA instance twenty-five million civilians in North Korea are suffering inhumane conditions as a result of this contrarian stance.

How could this be? How could the US & UN not heed the advice of China and Russia, the two closest neighbours and friends of North Korea? No external nation comprehends the DPRK culture and mechanisms of DPRK government better than these two Security Council members.

“The colossal failure of sanctions against North Korea  is also  an epic crime against humanity. Hundreds of thousands of ordinary people have died horrible deaths. It’s no good you saying that Pyongyang is at fault for not reassigning its funds to food and medicine in the cold winters and occasional droughts of the DPRK.

To the USA and UN Security Council we can only say: “You knew that would happen.”

You knew this. Knowing that hundreds of thousands of innocent civilians would be killed makes this a criminal act unless mitigation efforts are fully effective. They are not. You knew that. Mens rea. Criminal intent. It comes down to actus rea.  Is the action a crime?

UN Crime or not, murdering hundreds of thousands of North Koreans is unforgivable. Sanctions against North Korea that prevent food and medicine to reach ordinary peasants how so ever, murders these innocent people.” —  The RINJ Foundation

The Security Council statement follows in its entirety.

Furthermore, the resolutions clearly state that the Committee may, on a case-by-case basis, exempt any activity from the measures imposed by these resolutions if the Committee determines that such an exemption is necessary to facilitate the work of such organizations in the Democratic People’s Republic of Korea or for any other purpose consistent with the objectives of these resolutions.

To this end, the Security Council sanctions regime includes many mechanisms to enable Governments and humanitarian agencies to request exemptions, including a global mechanism designed for international and non-governmental organizations carrying out assistance and relief activities in the Democratic People’s Republic of Korea.  As such, the Committee has provided exemptions in the past to facilitate humanitarian and banking activities.

The 1718 Committee appreciates the efforts by Member States to fully and comprehensively implement relevant Security Council resolutions, while keeping in mind the need to clarify to public and private sector entities in their jurisdiction in order to make them aware of the humanitarian exemptions contained therein, as well as the need to avoid unduly restricting the delivery of humanitarian assistance to the Democratic People’s Republic of Korea.