To call Yasmina, age 15, a survivor is an understatement. Burmese soldiers shot and slashed  her family members to death as they fled their village in late August. Yasmina (name changed) managed to escape and swim across a river to the next village. But she was not safe—soldiers grabbed her, dragged her into a hut, and gang raped her along with other ethnic Rohingya girls & women. 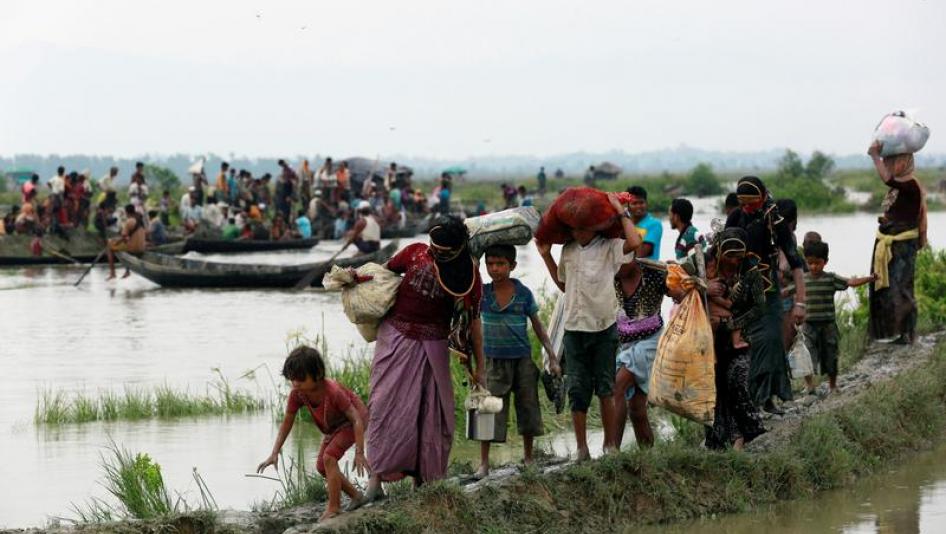 Rohingya refugees walk on a muddy path as others travel on a boat after crossing the Bangladesh-Myanmar border, in Teknaf, Bangladesh, September 6, 2017. Reuters

“They were raping them constantly, different men…all in uniform,” Yasmina said. “When I got up…I was in so much pain, but I thought, ‘What can I do? If I stay here I will die.’ And so we left, maybe nine of us together. We ran.”

Many people in Japan and around the world have been horrified to learn of the Burmese military atrocities against the Rohingya Muslim minority in northern Rakhine State. The Japanese government has condemned these attacks, but needs to increase pressure on the Burmese government to end them.

The scale and intensity of this crisis is staggering and demands a strong international response. More than 620,000 women, men, and children have fled a campaign of ethnic cleansing and are now living in massive, overcrowded refugee camps in Bangladesh. Their safety, respect for their rights, and their future are uncertain.

The latest attacks on Rohingya began after a Rohingya rebel group attacked government outposts and a military base on August 25. The military responded with large-scale attacks on villages to drive the Rohingya out under the guise of counter-insurgency operations. Soldiers committed massacres and other killings, arbitrary arrests, mass arson, and widespread rape.

Human Rights Watch interviewed 52 Rohingya women and girls in Bangladesh in October. All but one of the 29 rape survivors we spoke to had been gang raped by men in uniform. They described being hit, kicked, and bitten on their breasts. Aid workers have said they have treated hundreds of survivors, most likely only the tip of the iceberg. Stigma around sexual violence and chaos in the sprawling refugee camps mean that many women and girls do not report being raped to authorities or health workers.

We spoke to survivors of gang rapes who had to walk with severely injured or swollen genitals for many days to reach Bangladesh. Step after step, day after day. There are no words, one woman said, to describe the pain. Many of the women we interviewed a month after their journey were still suffering from unhealed vaginal tears and infections.

Rape often causes long-lasting fear and anxiety. Survivors said they could not sleep, had no appetite or interest in other people, were scared or anxious all the time, and felt depressed. “I will never go back home,” one woman said. Yasmina said she was numb.

It was not easy for the women and girls we interviewed to talk about rape and to revisit the most traumatic moments of their lives. Those who agreed to speak to us did so because they wanted the world to know. They also want action.

But it’s not clear if the Japanese government has been listening.

As a first step, when Japan holds the presidency of the UN Security Council in December, it should invite the UN special representative on sexual violence in conflict to provide a public briefing of her recent investigation on sexual violence against the Rohingya.

Japan should also press the Security Council to impose travel bans and asset freezes on Burmese military officials implicated in grave human rights abuses, adopt an arms embargo on Burma, and refer the situation in Burma to the International Criminal Court. Japan already missed an important opportunity when it failed to support a General Assembly resolution that condemned “extrajudicial killings, rape … arbitrary detention and the unexplained disappearance of Rohingya civilians [and] large-scale destruction of homes and systematic evictions.” Japan should do better in December at the General Assembly, and also support action at the UN Human Rights Council to protect the basic rights of this persecuted minority.

Meanwhile, the Japanese government should ban financial transactions with key Burmese military-owned enterprises. The government should also continue to provide financial support to the humanitarian relief effort serving Rohingya refugees in Bangladesh and support their right not to be forcibly returned to Burma.

Burmese authorities have exonerated themselves of all wrongdoing, including widespread rape by soldiers, in the media and in a whitewash of an investigation. In September, one Burmese official effectively called the survivors liars. “Where is the proof?” he said. “Look at those women who are making these claims – would anyone want to rape them?”

Will Japan stand with Rohingya survivors of rape?