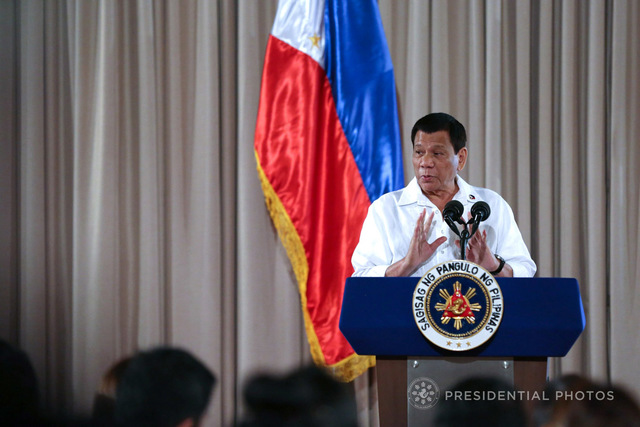 Tuesday December 19, 2017 — Speaking to a group of government officials and to the entire Philippines nation via “CNN Philippines”, the President of the country, Rodrigo Duterte, while dripping and drooling misogyny  all over the stage at Malacanang, offended women and children in what some will claim was just another set of “rape jokes”. (Duterte spent a considerable amount of time explaining the difference between drug users in the past raping beautiful women and today raping babies.)

Recent history suggests Duterte doesn’t actually care too much about babies he says are collateral damage in his so called “drug war” on the poor, like these babies below.

“May I be forgiven by Maggie dela Riva? ‘Yung mga nirerape noon, magaganda talaga (The women raped in the past were beautiful)–worth going to jail for–worth dying for…” he said in his speech at Malacañang’s Ceremonial Hall.

The Late Ms. Dela Riva, a Filipino actress Duterte was joking about today was abducted and raped in 1967 by four supposedly stoned men: Jaime Jose, Basilio Pineda Jr, Edgardo Aquino, and Rogelio Canal. All four are deceased. One died by drug overdose in prison and three were executed in the electric chair.

Philippines President Duterte claimed today that Shabu users are the cause of the modern rape culture in the Philippines.  That is a non starter “and stupid”, says the RINJ Philippines medical team in Manila

A raging Philippines rape culture and rampant incest are the real issues. The truth is that an occasional user of Shabu like maybe Duterte might get a boost in sexual performance because it would keep the old guy from falling asleep during sex but long term use causes lack of libido, erectile dysfunction and the renowned “crystal (limp) dick”.

Telling his country that Shabu is good for sex is lunacy. It isn’t. You likely can’t use methamphetamine once without being drawn into the addiction trap because it is extremely addictive, more than heroin and even nicotine. Shabu is psychologically and physiologically addictive.

Shabu addiction will kill you.

Shabu addicts are far more likely to become HIV positive because of the physiological impact it has on the genital region. We will explain that.

Addicts suffer almost complete sexual dysfunction over time. Eventually the entire body of an addict begins to shutdown as the daily quantity of the drug rises to match tolerance and increasing need. Cardiovascular disease is a certainty.

Addiction is a death sentence with a faked value as a sex stimuli.

Methamphetamine seems like an aphrodisiac on first time use, but that is the lure for the fly to the spider web. Once in the web of addiction you are done.

If you wish to improve your sexual enjoyment with your consenting partner, try being healthy instead.

That is what the President should be saying about increasing libido. Live strong, exercise regularly, sleep well, eat healthy food, and live a balanced life with your partner, a life of love, productive work and healthy play.

Methamphetamine Effects on the Body

Other than the beginning users euphoric sensations, methamphetamine can have severe side effects on the physiology of the body and brain. Chronic users may display symptoms such as anxiety, confusion, insomnia, and disordered mood. 1

These manifestations contraindicate an active sex life, in fact high blood pressure will end your sex life and your existence on this Earth. Users may also experience weight loss, dental problems, and sores on the skin. 1

Methamphetamine has a significant effect on the chemistry of the brain, and therefore can alter many aspects of one’s personality and cognition, including judgement, self control, and perception. Due to these changes, beginning users may be more prone to practice unsafe sex as their judgement may be too impaired to remember to use a condom or to ask their partner if they are free of sexually transmitted infections.

Addicts may share needles while injecting drugs, increasing their risk of contracting serologically (body fluids such as blood) transmitted diseases such as HIV (Human Immunodeficiency Virus) or Hepatitis B and C.1 Additionally, some addicts may feel the need to resort to desperate measures to obtain more drugs, including exchanging sexual favors for drugs or drug money.

It is  more likely that drug addicts would be giving oral sex to others and highly unlikely that an advanced user would be raping anyone.

The ancient Philippines fable about drug-induced supermen raping the victim Dela Riva is the talk of machismo goons like Duterte.

Mr. Duterte: The honest truth about the Philippines…

Rape is no joke. Rape is caused by the decisions of a large percentage of the Philippines’ male community to commit a violent sex crime. The population of PH rapists is raping children because of a rape culture that says “it’s OK”; a justice system that has failed; and because some 10 million of the nation’s women are overseas foreign workers. When it comes to protecting children in the Philippines, women rank the highest as protectors. But women are absent as they leave the Philippines en masse to earn the largest part of the Philippines Gross Domestic Product.

What Ill-Effects Does Methamphetamine Use Really Cause?

It takes a very mentally disturbed person in the 21st Century to use Shabu. That’s because everyone knows that methamphetamine (speed, shabu, crystal etc.) harms users, even kills them (“speed kills”).

Without a doubt, self-destructive behavior, including Shabu addiction, is a significant mental health problem most often falling under the category of ‘depression’.  There is nearly a 100% certainty that Shabu will exacerbate depression in most patients. They are in big trouble and don’t know it until too late.

This may be due to a lack of regard for one’s own health, or a lack of knowledge about HIV transmission. Methamphetamine alters bodily secretions, causing the genital skin to become dry and thus more easily lesioned during intercourse. This provides a pathway for invasion of microorganisms that will lead to dire consequences.

Methamphetamine has been used in gay bath houses and sex clubs. That may be what Duterte is talking about and where his implied experience and knowledge is derived. The delayed or complete failure to ejaculate once, years ago, made methamphetamine a drug for sex workers allowing male prostitutes to have sex with more male customers.3 It also helped spread HIV and AIDS.