Mutually Assured Destruction (MAD) between the USA and Russia has prevailed. The (is-it-real-or-is-it-Twitter) Donald Trump in Washington has been backed into the shadows while Russia’s Vladimir Putin wins a diplomatic coup against the USA?

Neither the USA nor Russia have any business in Syria. They each play a fool’s game at the expense of humanity. The indistinct lines defining sides of a civil war make determining authorship of atrocities like chemical weapons used against civilians, impossible. Probably this is Assad’s work. (Why is he still at large?) Prove it.

The WWIII-threshold matter in Syria is over. It must be ended. We can only count on the calm, stable leadership of France’s President Emmanuel Macron and Britain’s Theresa May, probably the world’s most cogent leaders. They will hopefully refrain from adding to the violence in Syria and eventually bring Assad to justice.

That Russia strongly supports the use of chemical weapons against women and children, even to the point of all-out world war, says what you need to know about Russia’s leadership ethics. Moscow has become a Tuberculosis on the world’s lungs.

Washington has no policy to follow nor any cogent leadership to formulate strategy and instill confidence. Moscow has done the opposite despite its sinister intentions to prop-up a mass murderer, Bashar al-Assad, Syria’s dictator.

Chemical weapons hit women and children in Douma near Damascus on 7 April 2018, we know, but whose chemical weapons did this massacre *we don’t know for sure. This international crime along with hundreds of others committed by all sides in Syria must eventually be investigated and go to the courts, a better place than war. Let the rule of law prevail. 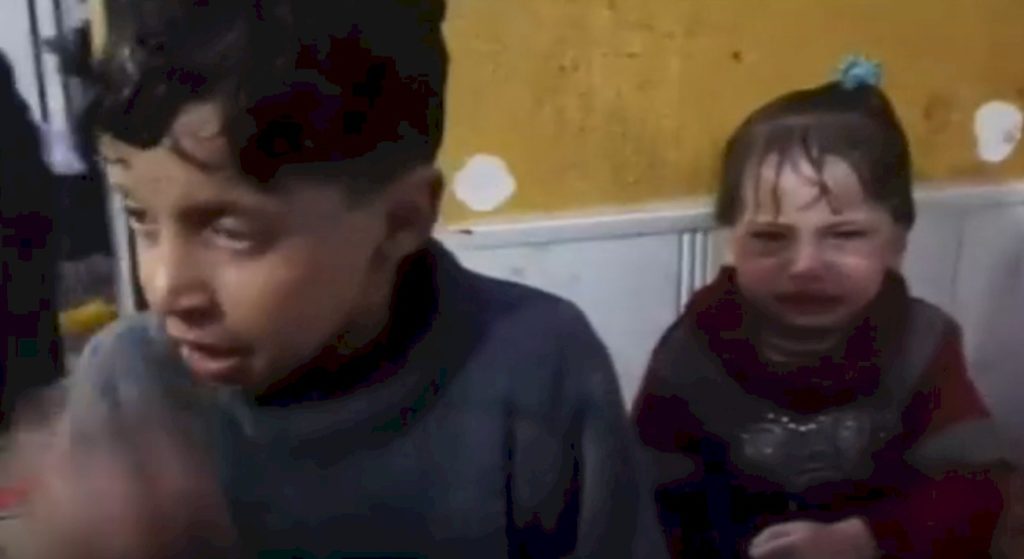 *Proof comes from evaluating the body fluids of medical cadavers. Certain health care workers were able to make evidence available. The attack is real but the author’s identity is ambiguous because of the indistinct lines in a civil war. Civil wars are awful that way. While witnesses say they saw Syrian regime helicopters (2 helicopters) dropping objects, the thing most people don’t realize is that Syrian Generals within Assad’s ranks and Syrian Generals on the Opposition side all have control of the State’s assets to some extent or at least ‘influence’ by their proximity or alliances to sympathizers within the military. Bashar al-Assad is not completely in control. We may never know who did this particular crime but it is no less true that dictator Bashar al-Assad must be held responsible. It could even be said that the situation is so complex that when the day is right, a coup d’état may indeed transpire.

Humanity lost in Douma this month.

One lesson shines clearly from this and each crisis nudging the doomsday clock. Humanity has a greater responsibility than ever before to elect cogent leadership.

Humanity is being led by its collective nose to the brink of one disaster following another by authoritarians. For the sake of human development, despicable persons can no longer hold public office.

Human Development Suffers at the hands of a few.

have each brought humanity a horror movie repertoire of war crimes, heinous crimes against humanity, and lead the globe to the brink of total annihilation.

Each of these authoritarians ridicule democracy and at a personal level demonstrate unhealthy lusts for power; salacious and misogynistic conduct; and a deep and abiding disdain for their fellow human beings.

This group that has threatened human development at its core, in particular the right to life, leads only some 600 million of us, roughly 8% of the world’s population, but they could kill us all with their psychopathic antics.