Why does America idolize rapists?

Does all this adulation for rapists say that in America, rape is OK for the rich and famous?

The picture and its story: Basketball player and alleged rapist Kobe Bryant is dead at 41 after a fatal helicopter crash 26 January, 2020 that killed nine including the single pilot flying the ubiquitous Sikorsky S-76. It was Bryant’s own private aircraft hence he Bryant had ordered the flight. Why did the pilot not decline to take the flight? The weather was awful.

Nine people die in Bizarre Helicopter Crash. One of them was a media darling who had been charged with raping a cognitively challenged teen in 2003 and got away with the alleged crime.

Kobe Bryant died 26 January 2020 a little before 10am, in Calabasas California in an extraordinarily unusual helicopter crash. The helicopter was of a type that is so safe and reliable it is often used as a specialty medical evacuation rotary-wing aircraft.

The name of the pilot and the other victims of the crash remain unknown at publication time although every media outlet in the USA is talking about Kobe Bryant.

Because of very public allegations of sexual misconduct in his past, the legacy of Kobe Bryant is tainted.

“I also want to make it clear that I do not question the motives of this young woman. No money has been paid to this woman. She has agreed that this statement will not be used against me in the civil case. Although I truly believe this encounter between us was consensual, I recognize now that she did not and does not view this incident the same way I did. After months of reviewing discovery, listening to her attorney, and even her testimony in person, I now understand how she feels that she did not consent to this encounter.

“I issue this statement today fully aware that while one part of this case ends today, another remains. I understand that the civil case against me will go forward. That part of this case will be decided by and between the parties directly involved in the incident and will no longer be a financial or emotional drain on the citizens of the state of Colorado.”

As a Daily Beast author put it in 2016, “the [rape] case was dismissed after the accuser, who had been dragged through the mud for months by the media and Bryant’s defense team, informed the court that she would not testify”.

Bryant was married with a 5-month-old daughter at the time in 2003 of the alleged rape. His wife Vanessa later, in 2011, filed for divorce citing years of painful infidelities with various women as her reason for irreconcilable differences.

Bryant’s many extramarital affairs were quite public and reportedly included a Playboy model as well as one of the key people producing the Kardashians’ reality TV show.

To keep his wife Vanessa quiet, perhaps, on his bad conduct, and on his affairs, he settled for giving her $100 million and all three of their mansions plus over two million per month. But then suddenly in 2013, the two were back together again and the divorce was off.

“Injuries inconsistent with consensual sex,” were reported by the hospital in the 2003 rape case where the rape survivor was examined under police supervision and control of the evidence chain of possession. Her jawline had contusions and her blood was found on the T-shirt Bryant wore on the night of the alleged rape. Bryant admitted to police that he had been choking the teen but said it was a sexual fetish. 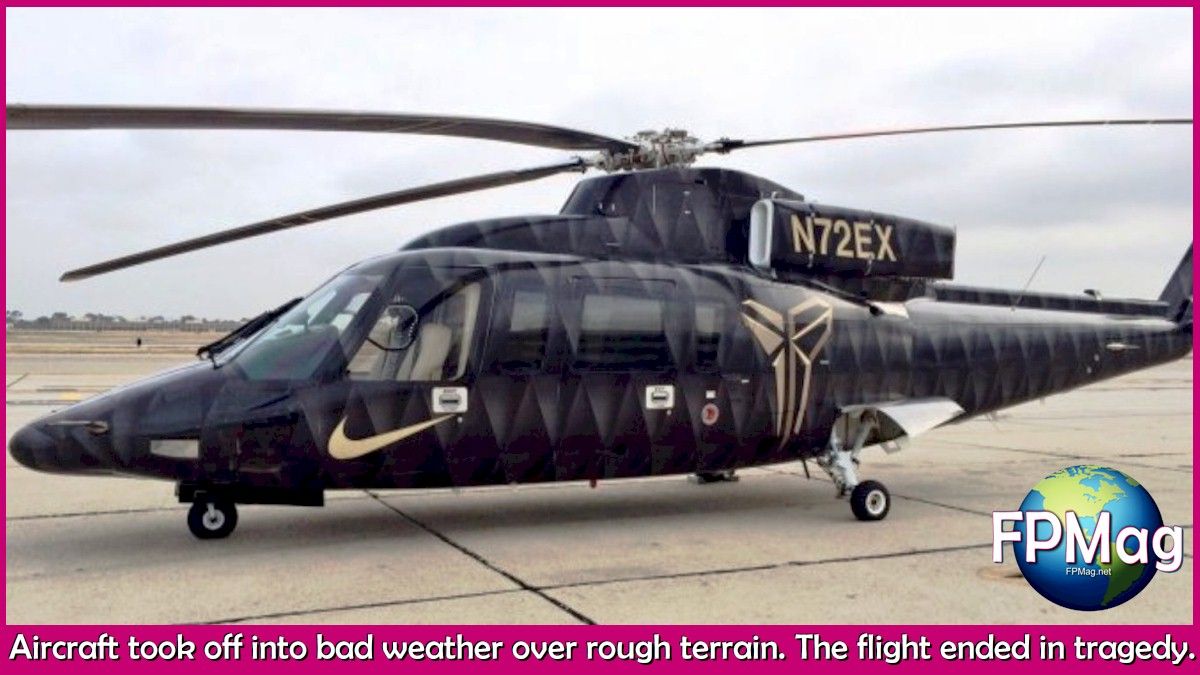 On Sunday, Bryant ordered his pilot to fly his private helicopter into rough terrain in bad weather.

This bad judgement ended the lives of nine souls. There is nothing to cheer about. This is only an enormous tragedy for the lives that Kobe Bryant damaged, destroyed, or ended.

FPMag sources who are uncomfortable with the circumstances of the flight, close to the area of the departure as well as being experienced in aviation matters, said on condition of anonymity “that the pilot and helicopter should never have left the ground”.

Just like the mass murder of over a dozen persons on 3 January where America only acknowledges one death, and idolizes the murderer,  America is today celebrating a man who could put balls through a basketball hoop, ignoring that Bryant put many women through hell and probably was involved in causing the accidental deaths of nine people including his daughter and himself. It was his helicopter and his flight.

It is also fairly clear that a vulnerable female teen with an apparent cognitive limitation had been violently raped by someone that night. Kobe Bryant during questioning by police first of all lied and then when invited to take a polygraph along with his alleged victim, he admitted to sex with this teen as adultery outside of his marriage. He also said that he was in the habit of doing that inasmuch as he was having frequent sex with another person whose name was Michele. He told police that the sex with Michele was equally violent and that she also had contusions and lacerations just like the women who alleged that Bryant had raped her.

Endless harassment of the vulnerable teen rape survivor for well over a year resulted in her refusing to testify in 2004 under threat of death following her identity being released to the public and to Bryant’s fans.

This is not a good legacy and reveals that there may never be justice and closure for the parties injured by Kobe Bryant’s admittedly violent sexual misconduct.

This erratic, angry misogynist Bryant is no hero. But America is worshipping the credibly-alleged rapist.

Judging by the misconduct of the current alleged rapist in the White House and his popular support, this may indeed be the character of the new America.

It’s what America has become.