Item 4. The Axis of Evil. Saudi Arabia has replaced ISIS. Why does USA and UK love that?

The Salafi-extremist ghouls in Riyadh beheaded 37 souls and crucified one, all of whom criticized the House of Saud’s wretched hooliganism and most of whom were Shia minorities. America and Britain didn’t bat an eye. The Saudi leadership and its reprehensible and brain-dead-brand of Islam are malignant cancers on humankind the world has decided to eradicate. Britain and America’s arms-dealers are cancers too. Cancer can be beaten. FPMag Week17

Iranian Foreign Minister Mohammad Javad Zarif said in a tweet: “After a wink at the dismembering of a journalist (Khashoggi), not a whisper from the Trump administration when Saudi Arabia beheads 37 men in one day.”

UN High Commissioner for Human Rights Michelle Bachelet noted in a statement last week that, “It is particularly abhorrent that at least three of those killed were minors at the time of their sentencing.”

Amnesty International claimed the majority of those executed in six cities belonged to the Shiite community and were convicted in “sham trials”. Fourteen people, it said, had participated in anti-government protests in the Eastern Province during the period 2011-2012 before being detained.

Outrage over the House of Saud’s animal-behaviour is commonplace for many years.

On 9 September, 2014, Christof Heyns, then UN Special Rapporteur on extrajudicial, summary or arbitrary executions commented that “Despite several calls by human rights bodies, Saudi Arabia continues to execute individuals with appalling regularity and in flagrant disregard of international law standards.”

Mr. Heyns also said in an extensive report that, “The trials are by all accounts grossly unfair. Defendants are often not allowed a lawyer and death sentences were imposed following confessions obtained under torture. …The method of execution then aggravates a situation that is already totally unacceptable.”

That was five years ago. Identical statements are being issued today, five years later, by those compelled to do so by the titles on their business cards.

The Iranian Foreign Minister raises a number of questions. He has ‘tweeted’ his concerns and has also given interviews to global TV networks to say that he is very concerned about the silence from Britain and the United States.

Much has been said by the United States Administration about the Saudi government spending over $100 billion on arms deals. Saudi has been buying US bombs to slaughter Yemeni civilians. US President Donald Trump claims that there are few things if any that would cause him to jeopardize his money-deals with Saudi Arabia. This video is about the death of Jamal Khashogghi and why the USA doesn’t protest the murder and dismemberment of the Washington Post columnist.

What About Britain? Why does not Britain criticize 37 Beheadings and 1 Crucifiction last Tuesday in Week 17?

At a recent FPMag editorial round table discussion (the table really is round), there was one of those coffee choking ‘eureka moments‘ and somebody spurted out, “I wonder…”.

“Britain and America are making a killing selling high priced munitions which to Saudi Arabia are a consumable item as is toilet paper in 34 of the most obese USA states (at 80% plus level 2 obesity). Those obese US States are consuming enough toilet paper to wipe out forests and Saudi Aria drops enough bombs to kill tens of thousands of civilians and make Britain and Americans, (a small percentage) very rich and those few wealthy billionaires spend their money to keep their benefactors in power.”

“Have you wondered why the Conservatives in Britain are adamant about Brexit even if the people are ready to string up the members of Britain’s government?”

Do Theresa May and Donald Trump have wealthy patrons donating to their political careers? Or is Britain so deeply together under the covers with American arms dealers that they need to be closer? Being a part of the European Union (EU) is counter to that “badboy gun slinger/seller” game.

“America,” was the answer all around. 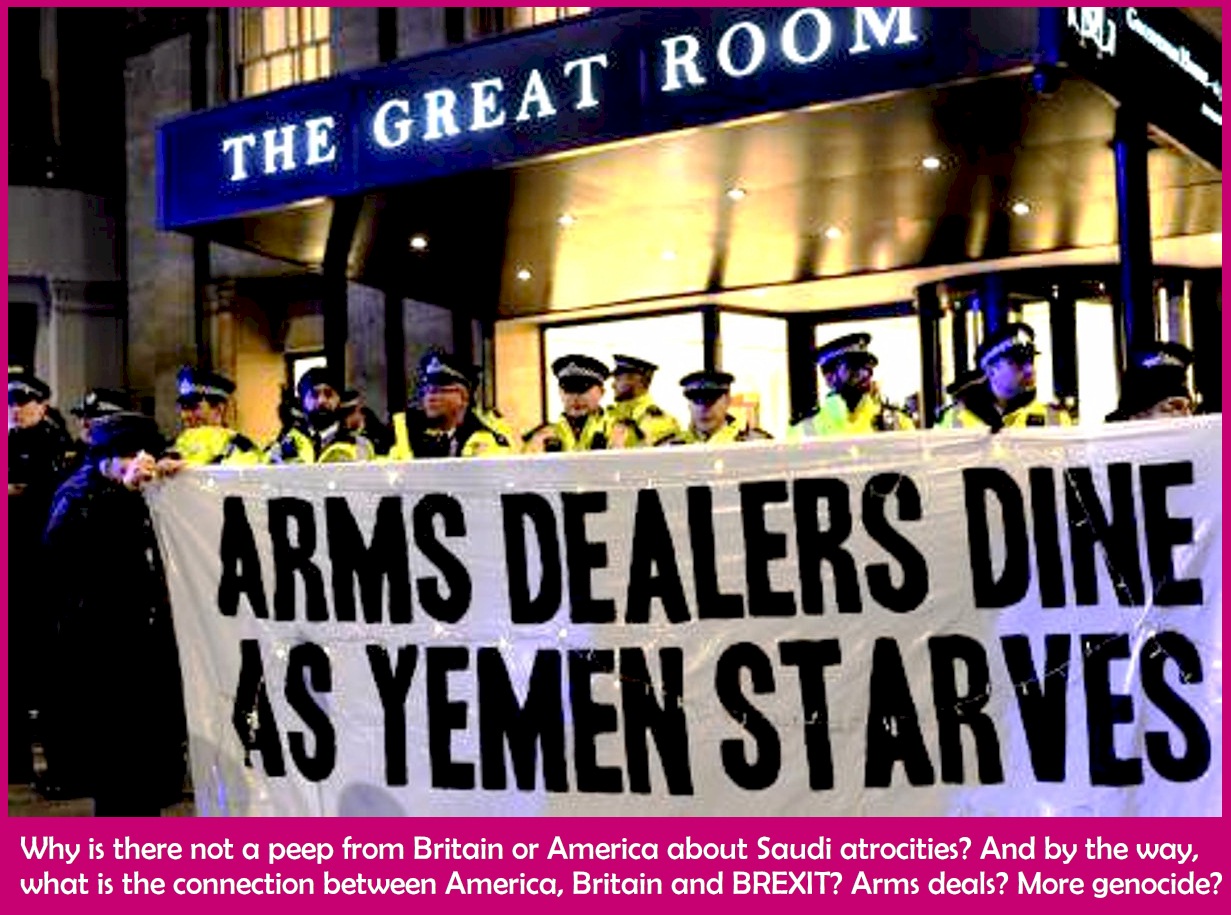 Photo Credit: Lydia Moon from the team running this demonstration. Read Lydia’s article “Who’s behind the ‘dark money’ bankrolling our politics?”. She has been asking some of the same questions FPMag has been asking.

Europe is not buying weapons because it is not killing anyone, implies Lydia Noon’s group in their literature. Britain and America want the Arms Sales Dollars in a big way.

“Brexit is a MUST“, says Theresa May. (Regardless of the fact that millions have signed a petition seeking another referendum.)  Brexit is a door to arms sales to America, Saudi Arabia, Bahrain, Azerbaijan and Uzbekistan and some two dozen other countries with horrible human rights records.

America needs Britain out of Europe because Europe:

In early April, NATO Secretary General, Jens Stoltenberg came to the United States to meet with the Congress and present a lecture on why the United States needs allies in Europe. Clearly he has acknowledged problems. “There are many disagreements,” he noted.

So there you have a theory that has some global early adopters, on why Britain and America love Saudi Arabia’s bloodiness. Do these lovers seek dark corners where nobody is watching?

“Item 4 of week 17 will not be let slide,” says Doctor Nemef.  “There are 37 public beheadings in Saudi done by the same Homininae primates we evolved from centuries ago but saw emerge in Mosul and ar-Raqqah doing brutal killings for one purpose: terrorizing the population into submission.

“For that matter,” she added, “that is the only use for the death penalty anywhere, taking power from the people and giving it to the man with the sword. Come and stand in my operating room in Syria. It is clear that mankind, for some of its more loathsome evolutionary male aberrations, is on a path of self-destruction.”

The article " Item 4. The Axis of Evil. Saudi Arabia has replaced ISIS. Why does USA and UK love that? " was written by Author: Micheal John (Biography, Email) Editor in Chief and Publisher of FPMag.
Contact Micheal John on Twitter ~ Facebook ~ LinkedIn ~ Instagram ~ Find on Wikipedia ~ Find on YouTube