Why I did not Report. Trump attacks Dr. Ford. Another comes forward. 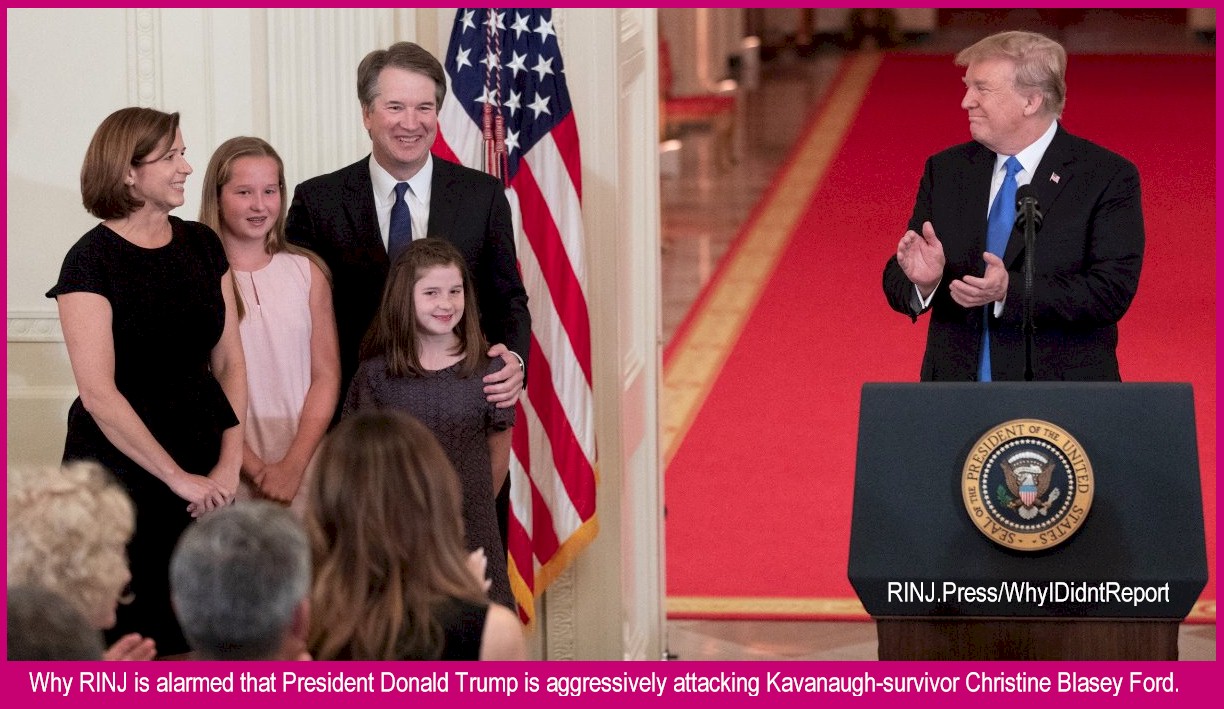 A global women’s movement on Google Plus and Twitter with the hashtag #WhyIDidntReport was a female reaction to a Donald Trump Tweet we won’t repeat. Feminine-Perspective: Why RINJ is alarmed that President Donald Trump is aggressively attacking Kavanaugh-survivor Christine Blasey Ford. Photo credit:Official White House Photograph, public domain.

Is Trump Transferring His Impunity for Crimes against Female Children to SC Candidate Brett Kavanaugh?

Christine Blasey Ford, a professor at an American University in Palo Alto California claims sexual misconduct against Judge Brett Kavanaugh, Trump’s recent candidate for the bench of the US Supreme Court. Trump has attacked Dr. Ford on Twitter. We shall not repeat that tweet.

Proposed by Dr. Roxanne Agnew-Davies, a clinical psychologist and an expert on the effects of sexual violence: victim-blaming correlates with fear. “It is not surprising when so many rape survivors blame themselves. Female jurors can look at the woman in the witness stand and decide she has done something ‘wrong’ such as flirting or having a drink with the defendant. Believing that she can therefore reassure herself that rape won’t happen to her as long as she does nothing similar.”

“It’s an anxiety syndrome men like Trump know about,” says a director of The RINJ Foundation, Sharon Santiago.

“Children don’t report rape crime out of fear“, she added.

“Oftentimes when we learn a child has been raped it is because she has been observed to be pregnant.

“That opens up another controversial issue. No right-thinking doctor is going let a tiny nine-year old try to carry a baby to term. That decision will kill the two of them.

“Hence the complications of children not reporting are so numerous it would fill a book. Look at the problem with males. We may never learn about male child rape until maybe later in their lives they speak out or from their suicide notes. Clearly this is a horrific crime and I am very concerned the US President makes light of this in supercilious tweets attacking Dr. Ford who has made an allegation against Judge Kavanaugh. I can’t imagine what emotions Dr. Ford must be enduring and at the same time I feel so sad for Mrs. Kavanaugh and her daughters.”

There will likely be other complainants coming forward following Dr. Ford’s revelation of Kavanaugh’s sexual misconduct and one other. The New Yorker magazine reported on Sunday evening that a 53-year-old woman, Deborah Ramirez, who attended Yale university with Brett Kavanaugh, has said that Kavanaugh thrust his penis to her face at a party at school.

RAPE is the penetration, no matter how slight, of the vagina or anus with any body part or object, or oral penetration by a sex organ of another person, without the consent of the victim.

Santiago notes that, “The sexual violence crimes men commit against women have far reaching consequences for so many people.”

Feminine Perspective: That is why, Mr. Trump, your attack on Dr. Ford is upsetting to everyone.

Santiago says she has a message for the US President, from many child rape survivors in South East Asia:

“President Donald Trump, you stand accused of raping children, with Jeffrey Epstein, while the kids were dressed like models.” 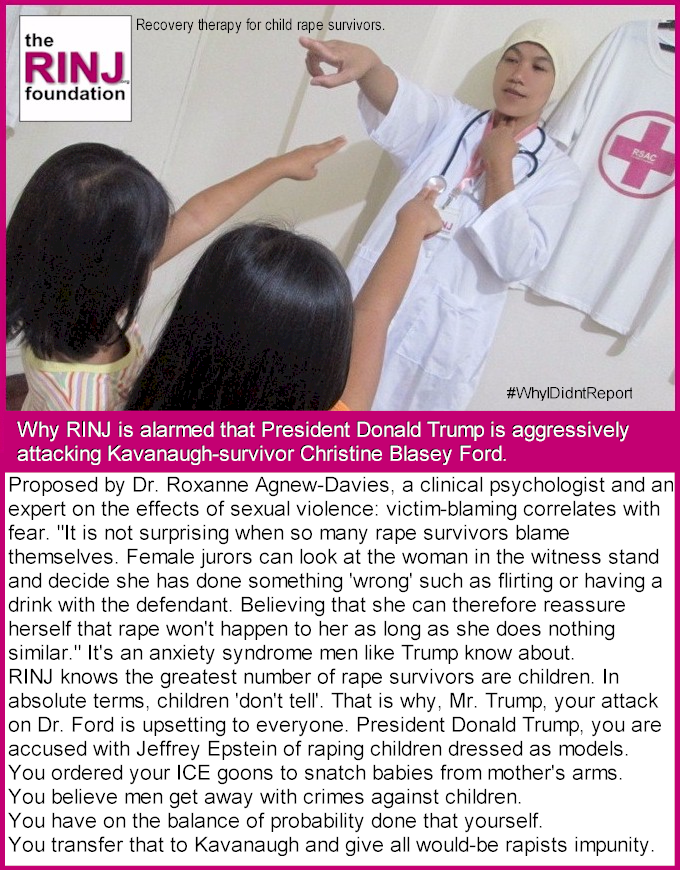 Expert accuses Donald Trump of trying to transfer his own perceived impunity for rape to Kavanaugh. Photo Credit: The RINJ Foundation, Melissa Hemingway.

The article " Why I did not Report. Trump attacks Dr. Ford. Another comes forward. " was written by Author: Katie Alsop (Biography, Email) Staff Writer Feminine Perspective. FPMag correspondent for the Middle East and Europe.
Contact Katie Alsop on Twitter ~ Facebook ~ Find on YouTube