Trump & Kim averted war. They can do more.

An article to respect International Day for the Total Elimination of Nuclear Weapons: 26 September, 2018 by Micheal John | micheal.john@fpmag.net | Editor

If you live on the California coastline, you might think the People’s Democratic Republic of Korea (DPRK) have a crazy leader, Kim Jong-un, in the vague distance on the other side of the Pacific Ocean.

Mr. Kim is shrewd, pampered, and ruthless but not crazy. The DPRK is not so far away now that its intercontinental missiles have a new engine.

Many of America’s doctors think Donald Trump is the mentally ill component says Howard Dean, and Trump might go postal and launch an attack against the DPRK to create a distraction as past misdeeds catch up with him.

Feminine-Perspective Magazine has a better idea.  Trump suffers depression. Such sufferers can do brilliant things on their better days. He is a narcissist.  Well, he would be a hero if he slammed down to lead nuclear disarmament. Mr. Kim has already said, he is in. Can we get one of those brilliant accomplishments from Mr. Trump? Maybe. Meanwhile, hide the nuclear buttons.

Who reads headlines about Russian collusion and pole dancers when ICBMs with thermonuclear bomb payloads are in the air.

In a flash experts believe North Korea can kill millions of Americans with up to a dozen mix of thermonuclear and atomic weapons. That’s new. It was always the other way round and since 1953 people on the north of the Korean peninsula have been terrified.

But don’t be afraid. North Koreans only want to survive. Kim Jong-un clearly says he doesn’t want a war as his American friend Dennis Rodman explains.

North Korea is armed with thermonuclear weapons as a deterrence. “Don’t attack us,” is the message from the 25 million people in North Korea. As violent a concept as that may be, it is how humans and many other species keep the peace. The might of the smite is balanced. It works. And Trump should never have threatened the DPRK or bullied its people. Millions suffer food and medicine shortages because of sanctions. In anger and near death they might strike back. Any creature would. 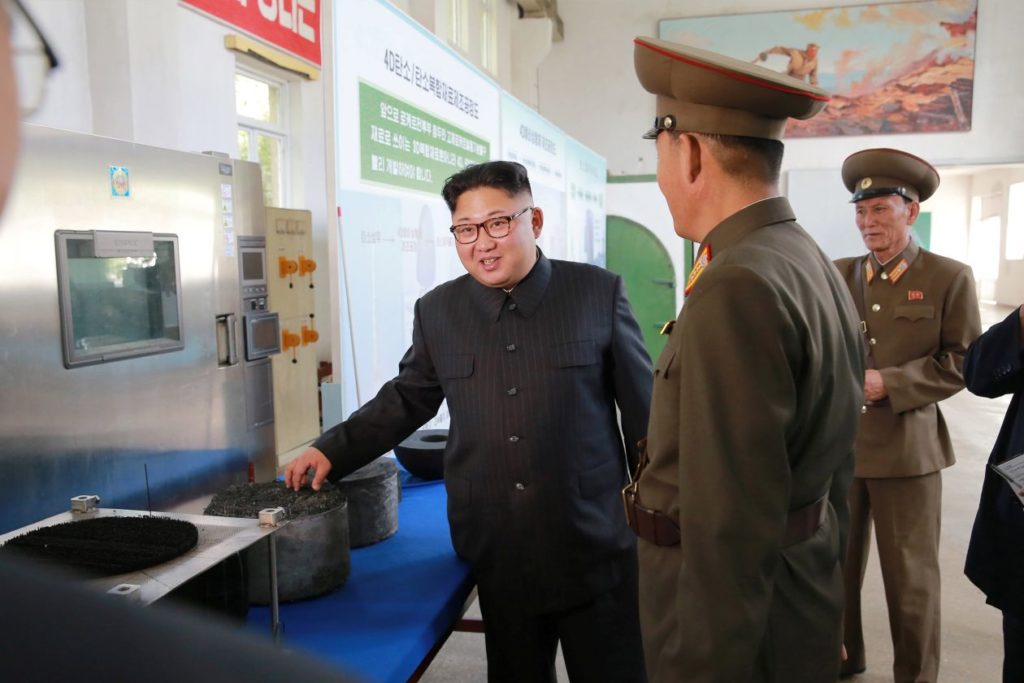 North Korea has had the atomic know-how for decades. Thermonuclear technology is a step ahead for them as far as anyone knows. DPRK scientists couldn’t create functional intercontinental ballistic missiles for decades.  Home-brew technology for testing, development, tracking and gathering metrics from the birds was expensive beyond reach. That caused Pyongyang to build relationships with countries interested in acquiring nuclear or chemical/biological weapon technology in exchange for their missile know-how. North Korea has numerous business friends in the Middle East and in Africa where it continues to do illegal chemical weapons business.

Trump & Kim have key to Global Nuclear Disarmament: They Talk

According to the International Institute for Security Studies (IISS) which published a report on this matter 13 months ago,  North Korea’s missile system is related to technology found in the Soviet RD-250 family of rocket engines. They were once built in the Ukraine. Much speculation links the technology to Russia either deliberately or because of turmoil in the Russian military-industrial infrastructure following upheaval in the Russian / Ukraine relationship.

North Korea’s infamous No-Dong missile was a copy of the scaled up Russian Scud B missile Pyongyang acquired from Egypt.

Consequently, Trump would be supported by a large number of his right-leaning racist supporters should he nuclear bomb North Korea and kill another few million Asians.

Feminine-perspective has repeatedly warned of observations around the world that see an encouraged culture of harassment, bullying, and violence, empowered by the misogynist-in-chief in Washington DC.

Doctor Leonard describes this as an emboldened culture led by a bigot-in-chief. His words allow more inclusiveness for the breadth of peoples of Earth impacted by Trump.

Can we take the good with the bad? Trump has done something that nobody thought possible. U.S. President Donald Trump met with North Korean Supreme Leader Kim Jong-un on June 12, 2018, in Singapore, in the first summit meeting between the leaders of the United States of America and the Democratic People’s Republic of Korea.

Trump’s Singapore accomplishment is epic. He and Kim averted war. He and Kim did what nobody else has done. They talked. Nothing else matters.

Kim Jong-un has his own unique style but when the chips are down he seems a lot like his grandpa in his ruthlessness and tireless belief in his own power and the future of his country.

Mr. Kim’s rise to power after the death of his father was messy and his grab for authority over the old dogs who supported his dad was equally murderous. His newborn administration had people who stood in his way killed, of that the West seems sure with the help of South Korea’s intelligence gathering apparatus.

The direct relatives of Jang Song Thaek, Kim Jong-un’s uncle whom Mr. Kim had executed in 2014, have all been put to death on the orders of Kim. That says a lot about Mr. Kim’s nature. We don’t know if Mr. Kim gave that order. We don’t even know if Kim has always while in office had the power he has today but suspect he went from no power to being about 60% in control of the country now. The DPRK culture of secrecy is so pervasive and strong that nobody knows anything for sure. Not even inside the country.

North Korea is a serious member of the Nuclear Club

North Korea has developed a little more showmanship with their nuclear bombs and ballistic missiles. But the real wake-up call came on September 3, 2017 when Mr. Kim ordered the test of a fusion device, a thermonuclear hydrogen bomb. The test resulted in an explosion that exceeded expectations.

Every member of the nuclear club with the exception of Israel which is not officially a member, has tested a thermonuclear device. In each case the power of the detonation was greater than expected and really not in the control of its creator.

You might say they don’t exactly know what they are doing but in reality even the nuclear giants, America and Russia don’t know the outer reaches of fussion’s awesome thermonuclear power. It is a likely global end game if played.

Kanyon, an autonomous Russian drone (torpedo) with a 100-megaton nuclear weapon payload is what the world must contend with next in the way of powerful weapons. You may not realize the importance of a starting point of 100 megatons but look at the delivery technology. It’s a long range unmanned submarine that can be programmed to kill your city or country if it doesn’t get it’s hourly, daily or weekly all’s well signal from the Kremlin.

That means that if Russia bombs an American city or nukes a Canadian cityto threaten that America could be next, and America responds by obliterating Russia, some large number of Kanyon weapons would be released and destroy America and end Earth’s human-supportive environment.

The concept of autonomously-delivered nuclear weapons has been around for a long time. Kanyon is a self-defence weapon inasmuch as it is a deterrence to attacks designed to wipe out a target country and its ability to strike back. Those American theories are counter to the deterrence of mutually assured destruction. Russia is talking the next step.

Most algorithms written to calculate the effect of such a bomb, fail because the yield is so high and there are so many variables. Count on massive death within 10 kilometres and glass braking as far as 100 kilometres distant. Depending on target choice the death rate would exceed anything that has happened in the past that we know about. New York for example could lose as many as 20 million souls including the radiation sickness and complications from burns and structural failures in the following year. Immediately ten million people would be vaporized.   You can visit nukemap to run scenarios but at the time of publication the algorithm of Alex Wellerstein who created the site is not written for devices of the Kanyon’s initial magnitude. 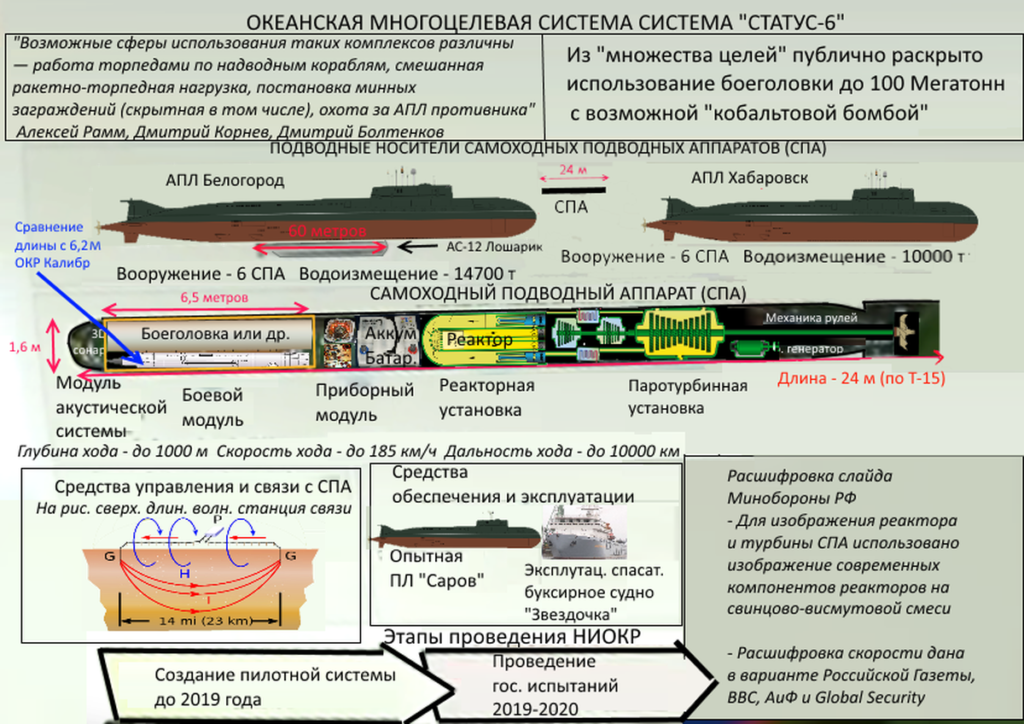 Escalation of nuclear weaponry has begun and the Trump/Kim debacle is part of the problem.

Notwithstanding, in all of history, no two men have come together with the real capability of solving the world’s greatest problem.

The Non-Proliferation regime is in for a big surprise. Secretly, Iran is as much of a nuclear power as is the DPRK and maybe Israel. These three countries live inside a bubble where secrecy and suspicion are norms. It’s hard to get accurate and detailed information. This is what I believe while listening to informed sources. That’s as far as it goes. Secrets and speculation is all we have. I can’t count the bombs.

The entire nuclear club would likely enjoy enormous benefits of prosperity and human development if the colossal costs of nuclear weapons development were reassigned to their coffers. The burden of upkeep is like a lead weight.

Mr. Trump with Mr. Kim have great potential to bring all nations to the table and begin nuclear disarmament in a very real sense.

I hope they do that and surprise everyone. Meanwhile join us in spirit for a ten minute coffee break at 10:00 am September 26, and talk only about global nuclear disarmament, please.

International Day for the Total Elimination of Nuclear Weapons: 26 September

Note:
Exactly as released to us by Pyongyang but translated to English as best as can be.