When the President mocks your wife for warning women about a guy who pinned her down and tried to rape her, you might fumble in your anger to correctly explain the diagnostic manual for mental illness. You might stutter in rage as you try to express it’s suggestions to practitioners on how to diagnose the segments of the sliced pie of human personality disorders, such as the “APD”. Thank God for street vernacular.

Hence the Detroit homey’s street vernacular for Anti-Social Personality Disordered (APD) (Sociopath or Psychopath) scumbags like Donald Trump is shortened down to one word, a$$hole. I suggest they just say, “Trump”. It means the same thing. 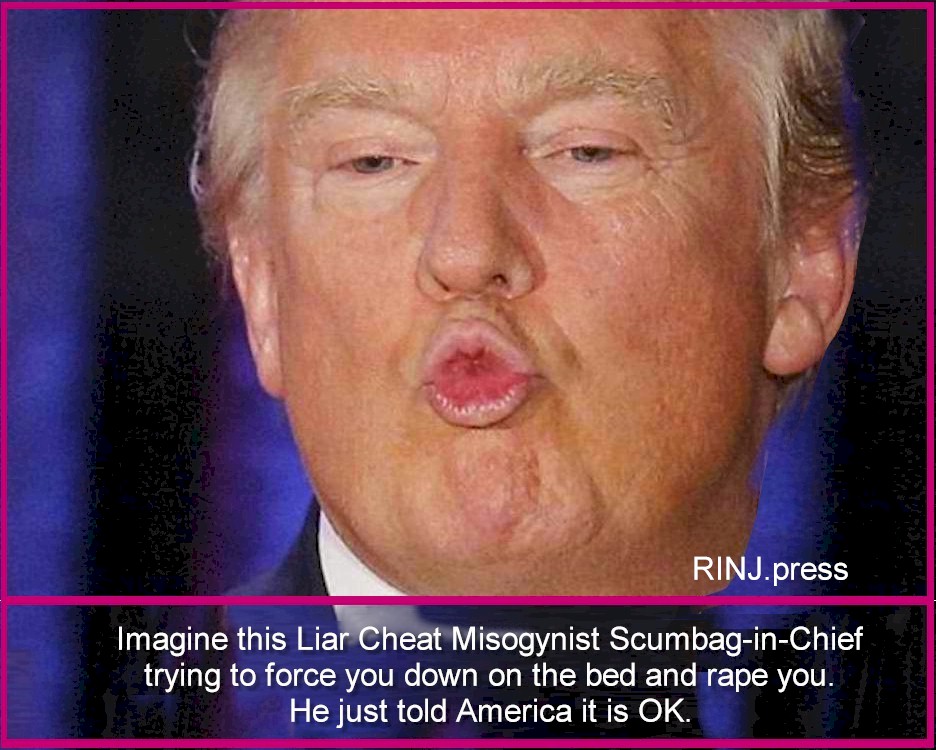 Telling men not to rape just got a lot more difficult. Photo Credit: Is Art by Melissa Hemingway

But those men who have been charged with raping women now have the ‘Trump Defense‘ which basically does as the President of the United States does, blames the victim.

Ladies. Chill out. Consider From whence it Came

Donald Trump is a senile old man who wears diapers (same brand as worn by Saudi Arabian King Salman) because he can’t get through an hour without wetting himself.

Trump is a guy who burps, farts and screams his head off at the slightest annoyance even though in any room he enters, he is the greatest annoyance.

Trump inherited a lot of money but also received a lot of money through a tax evasion scheme his father invented when D. Trump was born. I must have said this a million times. Trump has used black tax money to pay his way out of numerous rape cases. He has stolen money from many people. He is sued by many. He is likely the most loathed person on planet Earth. He is not only a rapist but he is also a thief. Moreover that’s the kind of person he chooses to admire: like the man he says he loves, Mr. Kim Jong-un, the North Korean who pulls the wings off flies and murders his relatives with VX-series weaponized toxins.

Trump’s best friends are mass murderers like Mohammad Bin Salman, (I am still livid — furious —  at him and Trump for murdering a bus-load of children on 9 August but what difference does that make to scumbags like Trump and the House of Saud).

Add to Trump’s only-friends list Omar al-Bashir, and Rodrigo Duterte both of whom have their soldiers do the raping because neither of them can get it up.

Trump’s case is like all these scumbags, there’s nothing you can do about it.

These are three men whom, like Trump, just one glance at them tells you that they have dirty underwear, and they stink, so stay clear.

But Here is the Scary Part. Americans Elected Trump and Cheered for him Last Night

So I asked a female soldier today, what can women do?

She is an Asian soldier who went through hell as a little girl in Cambodia’s child sex camps, over two decades ago. What can women do now that Trump has encouraged the college males of the United States to drag women into dorm-rooms and rape them with impunity.

She said, “I carry a small firearm that is loaded, and if I find myself in the same position as was Christine Blasey Ford, being raped, I shoot him in the balls.”

I was a little shocked, but I see that there are many trumps out there who put women in that position.

Yes. What ARE we going to do about this? Write me.