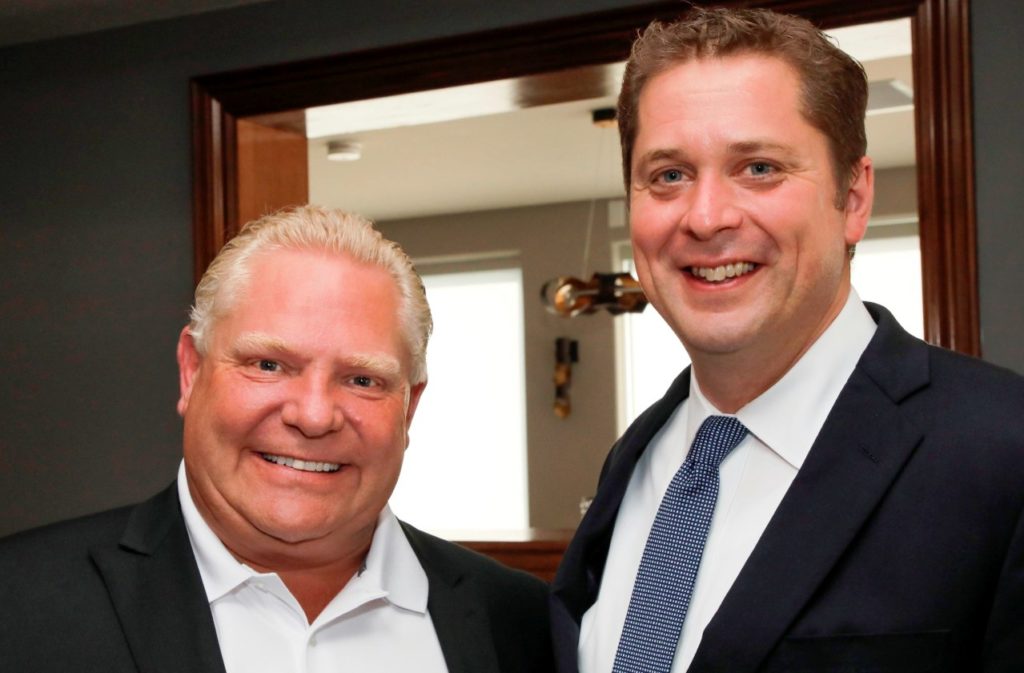 Oh Canada. (sigh) Douglas Bruce Ford, the homophobic liar and Ontario Premier at left —  Andrew Scheer at right, the naive Leader of the Official Opposition (federal parliament since May 2017). Photo by Andre Forget for Andrew Scheer

Note: For this report the writer spent many hours talking to seven RINJ Foundation volunteers now working around the world or in Canada but with a long history doing the group’s work. Hereinafter this source is referred to as “focus group”

Jim Wilson is an extraordinary Canadian who has served Ontario as a public servant for a very long time, is what my focus group of women have said.

Mr. Wilson has resigned a position in the cabinet of Ontario Premier Douglas Ford because he has been accused by an anonymous claimant of sexual misconduct, Mr. Ford has publicly admitted this after first telling a lie.

That is as far as Mr. Wilson’s matter goes. As much as it is the right of a survivor to protect their privacy it is no less true that no conviction nor public condemnation can ensue from an anonymous survivor/witness. Following the resignation, this is, until real evidence arises of wrongdoing, Wilson, his boss and his accuser resolving the matter.

Tony Clement opened a can of worms with his philandering and gamesmanship in a lovers’ quarrel with his admitted sexting partner. There are more than one for sure. Read yesterday’s article?

We know about an alleged extortion letter which is in every aspect a scam. FPMag has conducted interviews of numerous young persons who have received unwanted communications from Tony Clement.

This is a copy of a letter circulated by scammers to random people. It is one of many different sets of content. Is this why Tony Clement says that he has been victimized by an extortionist? Source:Social Media

Another Ford Scandal in Toronto?

There is nothing a Premier can do “right” after covering up for male sexual miscreants who should be serving the public interest from a position of public trust but instead use power and control to commit objectification of staff.

Douglas Bruce Ford has earned mistrust. How stupid is this? Queens Park is teeming with women who have two ears and a better brain between their ears. Many are our RINJ members say our focus group. They hear everything.

What use does Ontario have for a premier lying about sexual misconduct and acting homophobic?

The survivor has ours and hopefully all of Canada’s heartfelt support and grateful thanks. You have done your country and community a service.

When 6 women talked to The RINJ Foundation late last year, says our focus group, about Patrick Brown, Douglas Ford was among the first to launch back room attacks against Brown. He eventually took Brown’s job. That’s politics?

But the righteous indignation of Ford over Brown’s conduct (and FPMag staff heard more than ever wrote which is why FPMag would otherwise solidly agree with Ford about protecting the “victim/witness” ) left him in the position where he apparently felt compelled to lie and say that Jim Wilson was leaving his job to undertake substance abuse therapy. Alcoholics anonymous doesn’t go along with that idea. Either quit drinking or cut way back. Let’s face it, this is a stupid lie.

If the Conservative Party in Ontario cannot do better than a lying leader covering up for homosexual misconduct of its senior members, it is not fit to govern. Having a homophobic misogynist as a provincial leader means that government is led for a patriarch of dinosaurs, only a small percentage of the province’s population, probably just the rich.

These issues are far too important and the risk to the public of such a way of thinking is far too great to allow this man to remain in high public office. There is no other way to look at this. If you disagree, or want to add your two cents, write me: melissa@fpmag.net

Scheer First Gave Tony Clement the Nod then heaved him out.

Andrew Scheer is a Catholic with a good education a nice partner, two fine daughters and two fine sons. He needs to protect all of that family plus guard the safety of women and children across Canada. It is a big responsibility of all parliamentarians just as it is for the members of the elite Privy Council. How could anyone be so naive as to think otherwise?

Andrew Scheer knew or should have known in March 2018 after his year of grace that Tony Clement was a diddler. Didn’t everyone in the caucus know this long before, going back to 2013/2014?

This has a long history going back to 2013. A women who has worked on this matter of Conservative Government (prior to 2015) sexual misconduct and misogyny for The RINJ Foundation is now working in their clinic in Idlib City, Syria. When I contacted her she humorously quipped about Scheer, “he is from Regina and the nice people from Regina don’t know or believe the world is this bad. He should spend a day in Manila rape clinic.”

Our friends in the FBI, the OPP and York Regional Police tell us that sexting pictures to girls and women is often a preliminary event to a greater crime. (Right. RINJ did say they don’t have friends in the RCMP and the Toronto Police forces, both of which are bastions of misogyny and gender-based violence.)

Toronto Police Blame The Victim for Being Raped: “You know, I think we’re beating around the bush here, … I’ve been told I’m not supposed to say this – however, women should avoid dressing like sluts in order not to be victimised.” Toronto Police Services member Michael Sanguinetti to a lecture group at Osgoode Hall in early 2011.

The RCMP, while working very hard now to fix the problems, has a scary history that goes as far as raping its own female members.  Ref:  The RCMP’s sexual assault review and victim support action plan.

The take-away is that when the bulk of policing in Canada is done by police services prone to gender-based violence, and the country led by male politicians who behave the same way, rape culture is a very serious problem and results in the deaths of thousands of women and children per year. RINJ does not quantify the number of rapes but does know the number of completely missing children and the circumstances reported about the event leading to the reports. Yes. Thousands per year.

Mr. Scheer says he wants to scrap the carbon tax and that he will be tough on crime. This sounds like Donald Trump who confiscates babies from migrants and says climate change is a myth. Maybe he is another Harper. Don’t Canadian politicians know anything about what is happening n the world? Study history?

Harper sent women’s rights into a tail spin and his ministers liked to tell rape jokes.

Yes, during the nearly ten-year Harper Government ministers told rape jokes, believed that “boys will be boys”, blocked women from achieving high ranking positions all the while denying that sex crime was a problem in Canada. Concomitantly this was the worst period of time for Canadian human rights and violations against the Universal Declaration of Human Rights.

Mr. Scheer needs to step up to the plate when a fully-identified woman writes or visits a constituent office to make a complaint of sexual misconduct.

Readers should not interpret Feminine Perspective Magazine’s coverage of persons we mention as accused of serial sexual misconduct or having commit the crime of rape but we do claim that some conduct of Mr. Tony Clement is typical of some well-known serial rapists. That is something Mr, Scheer needs some lecturing about.

In all fairness, the persons who provided statements with this information did not know if the matter was escalated to the “Leader’s Office”. Probably not. Frankly, that is a way of thinking in Canada. It is called a “rape culture” wherein sexual misconduct is accepted as a norm. The Canadian Criminal Code doesn’t even mention “RAPE“.

Concomitantly, Andrew Scheer did not according to sources who speak regularly with some constituent workers, write to constituent workers to say that all such matters should be brought to his attention in some manner. Maybe he will?

Who is doing the rape and murder of women and children in Canada.

Rape and murder of women & children happens far more often in Canada than most Canadians think. Where are the 9000+ missing indigenous girls and women?

Across Canada, each year, out of 50,000 kids who go missing, some 5-10,000 children are never found. Never found. Their last tears fell soundless and their cries never heard? Read Canada’s Missing for yourself when and if you get a moment to learn this compelling data. Where are they?

In Canada, because of the great distances between us, it is very easy to hide a body, forever.

Sadly, all over the world, in the millions, the best path to impunity for less powerful men who commit child rape seems to be murder. Did you know that the female population of the globe for various reasons is rapidly declining? Don’t encourage that. Fight for the safety of women and children.

So thank you for your service to Canada, Mr. Scheer. Please join RINJ in the fight for the safety of women and children across Canada. Maybe we could make this the launch of something that reverberates around the world.

The RINJ Foundation has invited Mr. Trudeau and Mr. Scheer to Fight for the Safety of women and Children in Canada

Think of the safety of every Canadian the way you think of your daughters, and sons, Mr. Scheer. That is your first job.

Sitting next to you at times was a man about whom we have read complaints from minor children as recently as today on Twitter. This is the kind of person a specialized therapist and a specialized police investigator should deal with, not 37 million Canadians.