Nous sommes avec Macron. The world is with Macron.

America is a friend to no nation: a threat to most.

Donald Trump is in France this minute launching attacks at his host Emmanuel Jean-Michel Frédéric Macron, President of France since 14 May 2017. 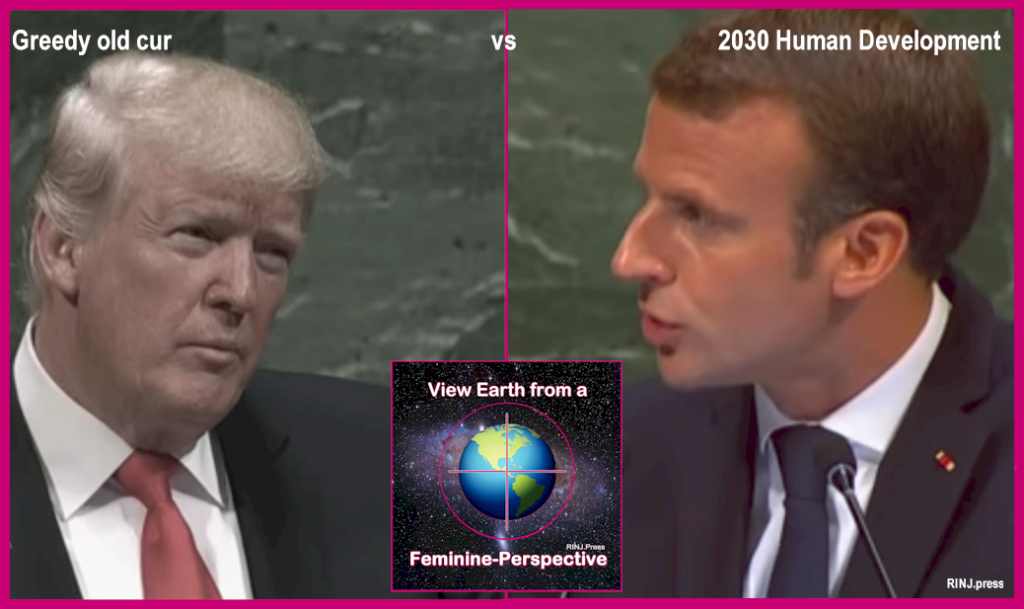 President Macron of France has just suggested that Europe build its own military in order to protect itself from the U.S., China and Russia. Very insulting, but perhaps Europe should first pay its fair share of NATO, which the U.S. subsidizes greatly!

The United States is bickering with Canada, France, EU, China, Russia, Iran and more; almost everyone except Saudi Arabia’s House of Saud  which is a Trump business partner. (Would you like to argue against that statement? )

America has entered economic wars with China, Iran, the DPRK and the Russian Federation bullying other nations to do the same, all with a view to consolidating wealth among a select few American persons and US entities with mega-net-earnings per annum.  This authoritarianism gone awry is leading to grave consequences for tens of millions of American citizens, possibly half the country or more.

Moreover, Russia, China and Iran now react with expansionism and militarization in self defence.

What Caused Trump to become so Obnoxiously Rude to Emmanuel  Macron

France’s Emmanuel Macron looks at all this and says Europe needs to act for itself. He is openly suggesting commonality and interoperability initiatives for a cooperative European military. The motivation is obvious. Once a good friend of Europe, America has become a quasi-enemy and that is worsening rapidly. The incomprehensible stupidity of unlawfully vacating agreement after agreement with Europe like the Paris Agreement and the killing of JCPOA is now a certain war path.

Then there is Brexit (the stupidest move in the history of the UK).  Macron is thinking about his country’s neighbours and friends in a good way. Despite Brexit,  Europe, France especially, is not leaving Britain to itself, friendless. Macron’s proposals for Europe’s defence is particularly inclusive of Britain. That of itself is inclusive of America in some kind of new alliance. Trump is not smart enough to see that or in the alternative, his advisors simply don’t get it (or Trump has no advisors he pays any heed).

France’s Emmanuel Macron is a strong adherent to the concept of human development and The 2030 Agenda for Sustainable Development, hence Trump who has no empathy with any sentient being, let alone humans, looks at Macron as if he is from an alien planet.

These factors have not put Trump and Macron at odds, they have put the world at odds with Trump.

The United States is fighting expensive official wars in seven countries: Afghanistan, Iraq, Libya, Niger, Somalia, Syria and Yemen. These wars all feature increased aerial strikes and growing numbers of ground troops since Donald Trump took office. They are costing a fortune to the American taxpayer and lining the pockets of arms manufacturers. The more bombs that are dropped, the more money the defence industry lobbyists and CEOs earn. (Source:  National Defense Authorization Act for Fiscal Year 2018.)

The United States is paying private mercenaries in “light footprint” operations to act on its behalf in dozens of other conflicts. There are over 57 (including minor) armed conflicts currently around the world. Private “light footprint” types of conflicts are fought with absolute plausible deniability for the White House. They perform operations like assassinations of Houthi leaders in Yemen and those similar to the one that murdered and dismembered journalist Jamal Khashoggi. (Read source: America’s addiction to Mercenaries.)

The United States offsets some costs of its enormous number of bombs dropped by selling more weapons and munitions than any nation to countries in Asia, the Middle East and Oceana. Source: Stockholm International Peace Research Institute (SIPRI).

This activity, it is widely believed, contributes to escalations of existing armed conflicts and the start of new wars which in turn increases arms sales and the flow of money to a narrowing pyramid of USA wealth holders.

The United States President has clearly stated in the case of Saudi Arabia that it will overlook extreme aggression even against US residents if that malevolence comes from a customer that buys US weapons.

The consequence of all this is monstrously expanding class disparities and terrifying economic insecurity among the poorest Americans and social unrest. Note: This also may mean that Europe can no longer count on America.

Guess what? Angry, depressed, hungry people will vote en masse for any obnoxious, verbally violent, woman-hating, racist lunatic who says he hates all the people who made things bad and will himself bring back the good times.

In such a despotic paradigm the trick to staying in power is being more obnoxious, more racist and find more enemies for constituents to hate and blame. Meanwhile actually keeping the population, poor, stupid, hungry, angry and depressed will get their next vote. That’s America today.

The United States is pursuing wealth for the wealthy  in a foreign policy steeped in racism and misogyny to new extremes using bullying and violence as protocols for imposing its interests.

That contrasts with a globalist’s view that governments should make development about its constituent peoples’ opportunities and choices.

This is not to be shrugged off as a passing anomaly. It is a trend in the United States which has been ignoring millions of impoverished Americans and treats constituents who are not white Christians as sub human.
It seems that 50% of America is driving the other half along a destructive path.

Human sustainable development is not just a globalist’s view. It is a world view. Through its various global institutions the nations of the world unanimously agree on human development as the way ahead. Methodology is apparently up for discussion but the theme is constant. (Read source documents starting from: Transforming our world: the 2030 Agenda for Sustainable Development)

Europe is emerging as near-nation state entity that is not just preaching since 2015  but budgeting and diligently advancing human development in the areas of agricultural initiatives, infrastructure development, science and technology; health care; and humanitarian action. Europe’s human development focuses on people, their opportunities and choices and it is a winning effort in many parts of the world, expanding yearly.

Now for some blasphemy

Trump is singing the songs that the senile old men around him can remember on their better mornings: cronyism, bullying; killing; and excessive amounts of money. They want Europe to bolster NATO because they control NATO.

The North Atlantic Treaty Organization has served a useful purpose but skipped too many reinventions of itself to stay relevant. It is a monster US-controlled donkey. It needs to become a big, fuel-cell-hydrogen powered Mercedes truck. Funding NATO at this time is only helping American interests and buying American weapons. NATO cannot be transformed. Sign the pink slips, send everyone home and build a new alliance. Make the dates coincide for a smooth transition and keep precious Europe safe because in the hands of Europe is the betterment of the human race.