Ahed Tamimi: The Girl who did Kick The Hornets Nest 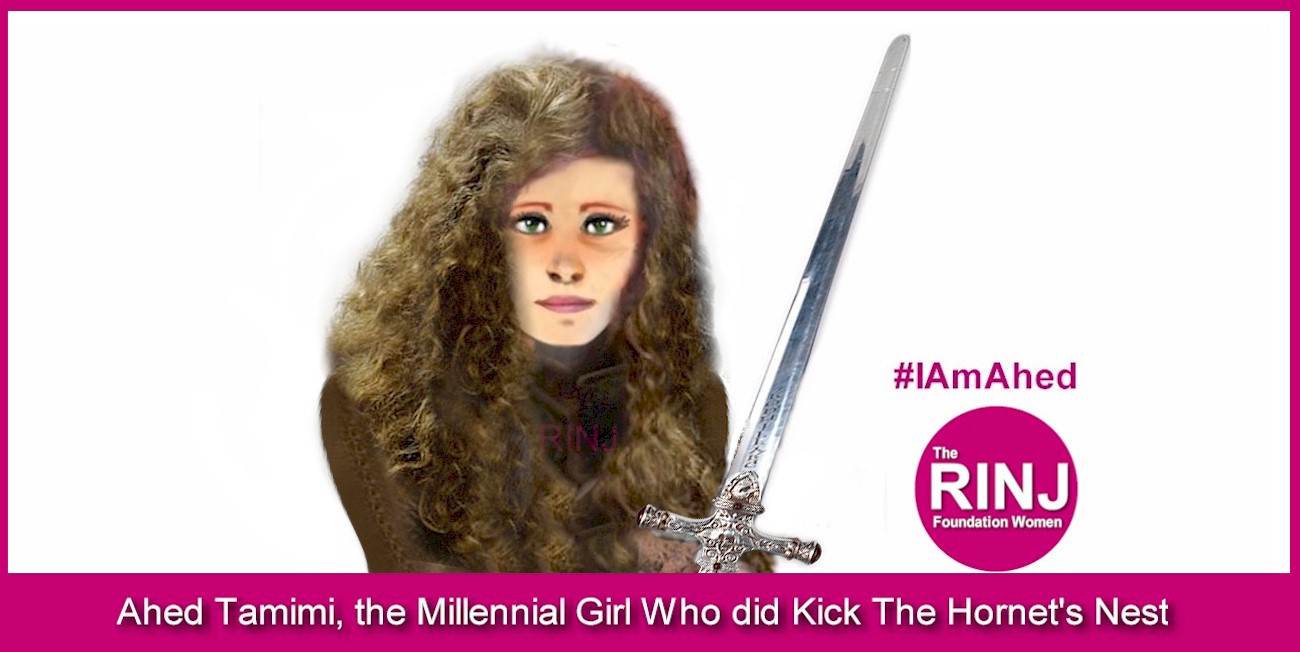 There are many questionable acts of Israel we overlook as we hold our noses but a new threshold has been crossed.

When Israeli Occupying Forces (IOF) were ordered to launch reprisals for peaceful demonstrations against civilian women and children, they opened a crack in the gates of hell upon themselves.  This needs to be stopped before the lid blows off Pandora’s Box. Stopping the abuse alone will not suffice, but ending the occupation and returning Palestine to its people will start the process of healing and rebuilding relationships around the world.

Arabs and Jews; if they can’t find a way to coexist on this planet, the bloody wars of the future will make those of the past look like child games.

In the West, journalists and politicians have dismissed Palestinian claims of human rights abuses in the Israeli Occupied Territories, for decades.

On 30 March, 2001, that global ignorance was destined to change with the birth of a girl child Ahed whom many today are acclaiming as the Palestinian equivalent of “Joan of Arc”,  a heroine of France, loved for her role during the Lancastrian phase of the Hundred Years’ War, and canonized as a Roman Catholic saint.

We wonder if Ahed Tamimi‘s parents told her of the famous Yasser Arafat quote:

“In order to obtain the goal of returning to Palestine, all of us sometimes have to grit our teeth.”

Last December, sixteen year old Ahed Tamimi slapped and kicked an Israeli Occupation Forces soldier who was on her property. She was upset her cousin and playmate was in a coma. Today the Israeli government is trying to lock this kid in a prison for her entire life.

Shortly before this event, Mohammed Tamimi was shot at close range in the village of Nabi Saleh in the occupied West Bank on Friday, according to witnesses. Ahed was overwhelmed with grief. 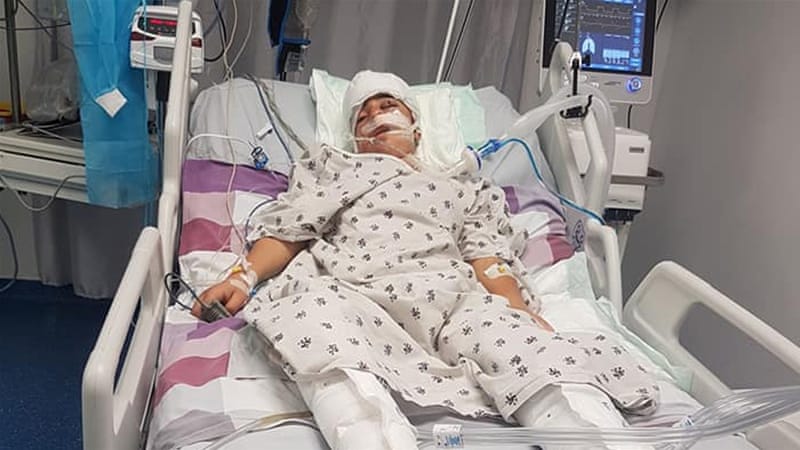 The 14-year-old Palestinian boy, Mohammed Tamimi, was placed into a medically-induced coma after Israeli soldiers shot him in the face with a rubber bullet during a protest against a US decision to recognise Jerusalem as Israel’s capital.

Manal Tamimi, a second cousin of Mohammed, said the bullet entered the teen’s face below his nose and broke his jaw before getting lodged into his skull.

“The blood was pouring from his face like a fountain,” the 43-year-old mother of four told Al Jazeera on Sunday.

“It was so scary. No one knew what to do. We were scared to move him. He had passed out and we were afraid he had already died.”

Israel is a dangerous place for Palestinian Children

Seven hundred children are incarcerated per year by the IOF but there is one child they want to put away forever.

The Israeli Occupation Forces hurt children and women as a retaliation for demonstrations against the Israeli occupation.  Bassem al-Tamimi knows this to be true.

Bassem al-Tamimi has been using his children as front line soldiers in the resistance to the Israeli occupation of Palestine. If anyone deserves jail time it might be him. Children are not to be used as soldiers of any kind.

Ahed Tamimi has been an activist child since a very young age at the behest of her father, Bassem al-Tamimi. This, RINJ has deplored in the past.  Bassem al-Tamimi is just as misogynistic and irresponsible as are the Israeli soldiers who have been harassing the Tamimi family and who killed Ahed’s cousin on January second.

Ahed’s mother who acquiesces to the father’s wrong-minded enlistment of his children, Nariman al-Tamimi, was arrested mid-December last year. Bassem al-Tamimi is free. The Israeli occupation forces are targeting the Palestine women and children with intent. This is in violation of the International Criminal Court’s Rome Statute.

The world is still not paying much attention to the plight of the Palestinians in the Israeli occupied territories of the Middle East. But Ahed Tamimi since her twelfth birthday, and even before, began to shine a light on herself as a passionate proponent of freedom. She today at 16 years of age is held in prison for slapping the face of a trespassing Israeli Occupying Forces soldier, at her house after Mohammed was shot in the face.

This child has not committed a crime. She has acted in self defence by slapping a soldier in the face pursuant to numerous attacks on herself and her family including younger siblings. Her younger sibling was about to be assailed and she slapped a soldier and identified herself as her sibling’s protector. She has the right to do that.

Long ago, it was settled that resistance and even armed struggle against a colonial occupation force is not just recognised under international law but specifically endorsed.

In accordance with international humanitarian law, wars of national liberation have been expressly embraced, through the adoption of Additional Protocol I (Volume 1125) to the Geneva Conventions of 1949 (pdf), as a protected and essential right of occupied people everywhere.  – Stanley L. Cohen

Alistair Burt, minister of state for the Middle East at Great Britain`s Foreign & Commonwealth Office, spoke out in defense of Ahed Tamimi, whose family he said he knows personally.

“We should be working hard to get a settlement for this issue so that these young people don’t have to continue to do what they’re doing.” The Right Honourable Alistair Burt

Good soldiers with Bad Orders? We are not sure.

The IDF members comprising the Israeli Occupation Forces have bad orders. In all fairness they appear to be good soldiers who live with the spirit of greatness and fortitude passed to them by brave soldiers like Yoni Netanyahu, but they today work under bad orders they do not wish to obey, but must.

This is very sad, indeed. Those giving the orders are telling soldiers to bring reprisals against the women and children. They are ‘attacking’ villages at night with ‘sonic bombs’, disturbing the peace, waking people all through the night, and at the same time interrupting the flow of food an water with check points wherein foodstuffs and bags are search and confiscated for little or no reason. Women are being harassed; detained; beaten; subjected to ridicule, sexual assault and all manner of violence.

As The Right Honourable Alistair Burt has said, these soldiers do not belong there. International law forbids the conduct of the Israeli Occupying Forces. But orders have come from on high to overcontrol security in the settlements.

Not only have the human rights of palestinian women and children been violated, their lives have been made a certain hell. We have seen this conduct in Islamic State controlled cities. Did ISIS learn from the Israelis? Do the jews practice what they learned from Hitler?

Palestinian President Mahmoud Abbas has a difficult task on his agenda. The one-state or two-state solution question to the Israel/Palestine conflict is outstanding for many years. IT must now be resolved and Israel needs to get out of the dark ages of oppression. It is shameful conduct unbecoming of The State of ISrael David Ben Gurrion had in mind.

According to  Israeli Prime Minister Benjamin Netanyahu, the new Palestinian state must recognize Israel’s legitimacy, and Israel must maintain security control of the West Bank. The latter is the deal breaker for the Palestinians and frankly, for most of the world.

Friends of Israel must warn the State that it has gone too far in targeting women and children for abuse.

She’s 16, from a family of peasants in an isolated village. The foreign occupation outraged her, and she set out to fight it. Her actions excited her oppressed people, whose spirits rose from the depths of despair to renewed hope. She was captured by her occupiers, who imprisoned and prosecuted her.

You’re probably thinking I mean 16-year-old Ahed Tamimi, who slapped the face of an Israel Defense Forces officer. But actually, I’m referring to Joan of Arc, known as “the maid of Orléans.”

In a remote village in northern France, a peasant girl rose up who could neither read nor write, and announced that she had received a message from heaven. God had assigned her to save France. Somehow she managed to reach the court of the king (who had yet to be crowned) and somehow she persuaded him to send her out with his army that was fighting for the city of Orléans.

Dressed in armor and carrying a flag, Joan of Arc put herself at the helm of the overwhelmed fighters, and so inspired them that they won the critical battle for the city. It was the turning point of the war. The French began to win battles, and the maid of Orléans was at the king’s side when he was finally crowned. But her luck didn’t hold out; as the battles continued she fell to the British, who tried her and burned her at the stake.

If the British thought they were thus rid of the annoying young woman, they had made a historic mistake. Joan of Arc was pronounced a saint by the Catholic Church and became a French national symbol and a role model who animated generations of warriors. Under her banner France became a world power. The greatest of writers and artists created masterpieces about her. Uri Avnery  .  Haaretz Israel News

We are grateful to Ahed Tamimi, the girl who did kick the hornet’s nest. In the past the Israeli’s have caused the death of such people. We all need to fight for the safety of this particular child and her mother.