Donald Trump is a Child Without A Conscience.

What is worse, Trump has the Nuclear Launch Codes.

From what authority does the United States believe it derives the right to demand unilateral nuclear disarmament from any other nation state? The USA has no such authority, just abundant arrogance and a very unstable and dangerous President.

It is America that needs to disarm its nuclear arsenal. 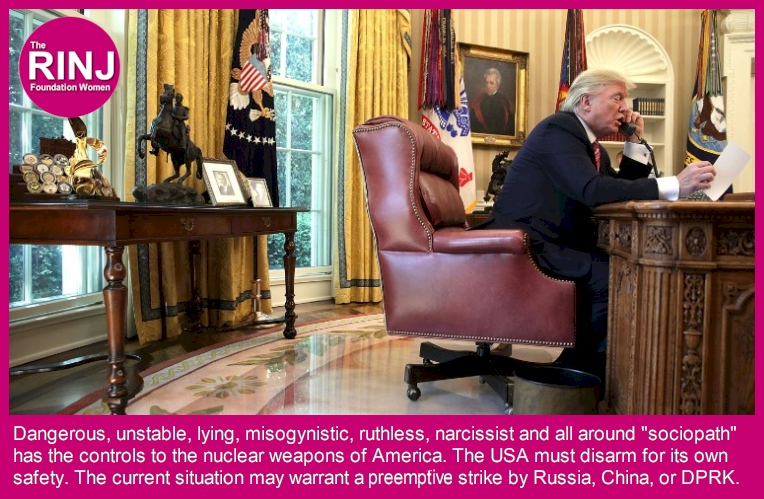 Dangerous, unstable, lying, misogynistic, ruthless, narcissistic and all around “sociopath” has the controls to the nuclear weapons of America. The United States must disarm for its own safety. Why? The current situation may warrant a preemptive strike by Russia, China, or DPRK.

Donald Trump is a Child Without A Conscience

The RINJ Foundation’s own medical staff on a straw poll see Trump’s behaviour as somewhat likened to that of an unloved “me-first, me-only” attention-seeking child with considerable emotional immaturity — but he is a child without a conscience.

President Donald Trump, apart from being a liar, is a misogynist and probably a sociopath (APD) with malignant narcissistic traits. Trump exhibits overwhelming evidence of these dangerous disorders. Trump’s attacks on women‘s reproductive rights speak volumes about the man.

The greatest fear of mankind has come true? An unstable malignant narcissist has control of the American nuclear weapon launch codes?

Each one of us surrendering to love, social cooperation and altruism versus hatred, separation and greed, will change our current path. We need to make a change because misogyny barters with extinction and its end game is species extermination.

Here we should state our bias. The RINJ Foundation Women is a Civil Society women’s group. Trump is a person who dislikes, despises and is strongly prejudiced against women. Of course we don’t like that in a world leader. It threatens women and children. That threat is dangerous to our species. The end game of misogyny is species extermination. 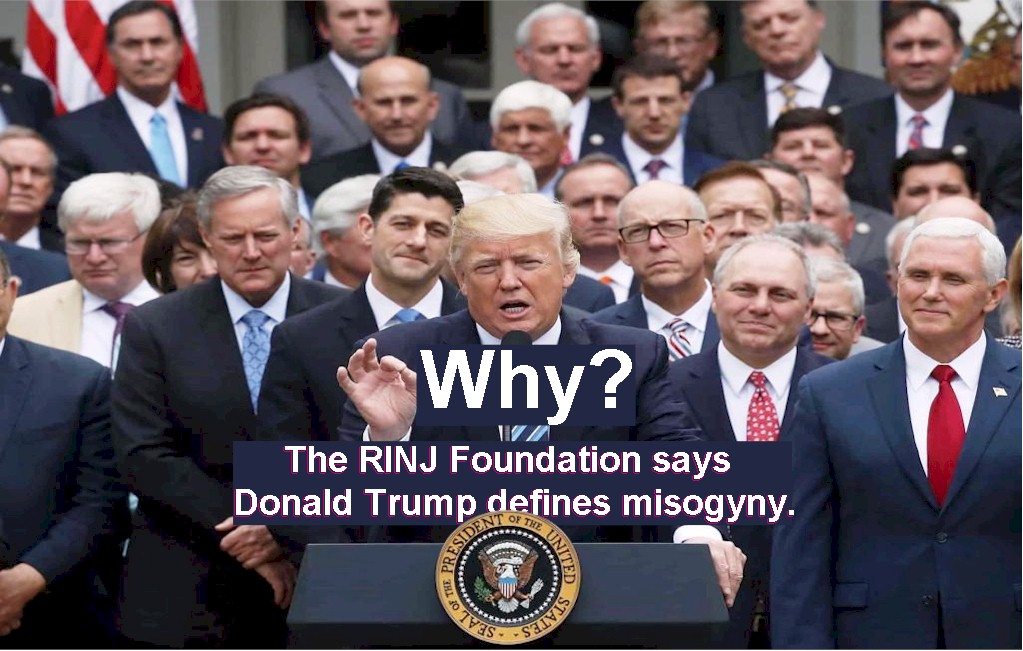 See: “What is the nature of men who continually attack women’s rights?”

Trump says he can drag any one of us around by our “pussies”. His words are telling but we judge his actions. Where are the women in his cabinet for example? His huge anti-social personality disorder and his malignant personality traits empower him to success at ruthless endeavors. He lacks empathy and a conscience. Oddly he performs like a pied piper of similarly disordered personalities. Together their craving for power and control is ominous.

Trump’s absolute demand for adulation makes him an extremely dangerous human and he is getting worse by the day. When he is opposed by anyone he becomes completely irrational and his worst traits rule him. So far in his time on Earth no person whose life has been touched by him is unscathed. He sees people as either usable or disposable–never as sentient beings. Watch how he attempts to destroy those who walk away from him. Yes. We don’t like Donald Trump. We are terrified that he is the President of the United States. He puts women and children around the world in great danger. We reached this conclusion after giving the man every benefit of the doubt.

We don’t say that his electoral opponent was any better. Hillary Clinton might have been worse. There could be a whole other thesis about why the USA nominates such horrible candidates from large lists of very good ones.

The world needs to focus on a lunatic in the White House threatening humanity? For sure we must stop calling the United States a “global super power” or a “leader of the free world”. 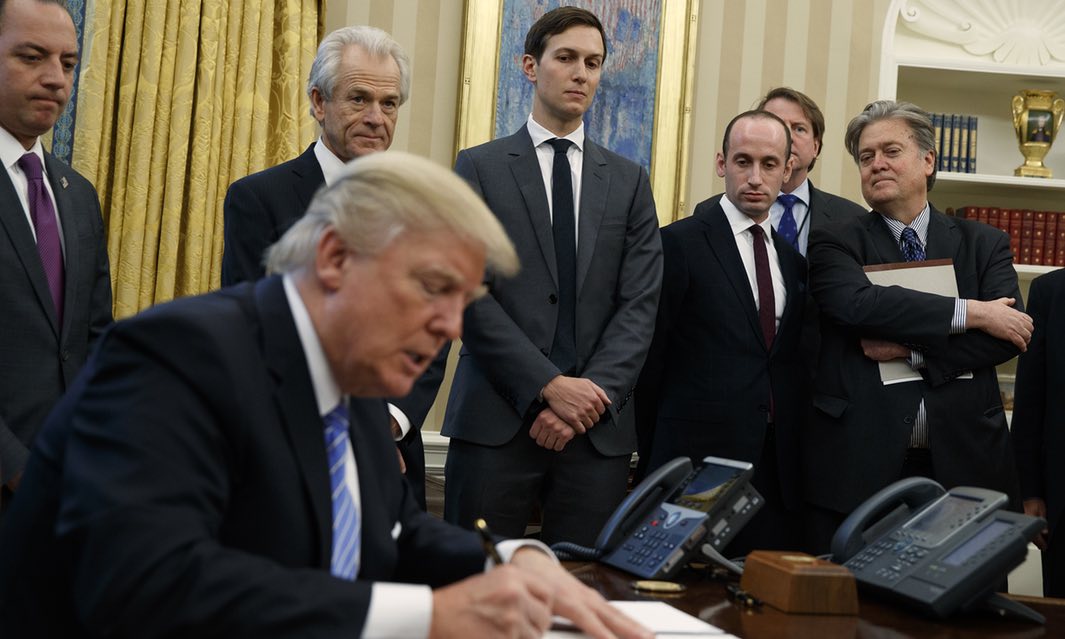 Doctor Lee, the editor of the book “The Dangerous Case of Donald Trump: 27 Psychiatrists and Mental Health Experts Assess a President”, said in her letter to the Times that “thousands” of mental health professionals are deeply worried about Trump’s state of mind.

The controversial Doctor Lee wrote to the New York Times saying that “We are currently witnessing more than his [Donald Trump’s] usual state of instability — in fact, a pattern of decompensation: increasing loss of touch with reality, marked signs of volatility and unpredictable behavior, and an attraction to violence as a means of coping… These characteristics place our country and the world at extreme risk of danger.”

Trump talks about his surprising win in the 2016 election. His obsession with the popular vote and whose inauguration in history got the most attendees is instructive but judge him for yourself on that.

Experts whose work we examine for this report talk about a preponderance of sociopaths in the United States. We have talked about the proclivity of sociopaths to be drawn to each other like packs of zombies. Trump’s most avid supporters do not exhibit any kind of moral nor intellectual high ground.  Read his supporters attacking the RINJ Foundation Women on their Facebook Page. It’s a worship cult of nasty traits like: impulsivity, irresponsibility, lack of remorse, ruthlessness and misogyny. Scary.

The USA must disarm, but multilaterally. Let’s be realistic.

Patriarchal maniacs building nukes like insecure boys buy bigger and bigger trucks to present themselves as having a big penis are holding 2.26 billion families for ransom. The ordinary people of this world do not elect government leaders to bully and abuse them. That is what authoritarian jerks like Trump are doing. It’s happening all around the world, not just in America, but in a America we have a terrifying problem.

The strange thing about psychopaths (an anti-social personality disordered person who has become psychotic) is that they are drawn to each other.

America has a growing preponderance of sociopaths, and that is a disturbing trend over the past twenty years.

Though sociopathy seems to be universal and timeless, there is credible evidence that some cultures contain fewer sociopaths than do other cultures. Intriguingly, sociopathy would appear to be relatively rare in certain East Asian countries, notably Japan and China. Studies conducted in both rural and urban areas of Taiwan have found a remarkably low prevalence of antisocial personality disorder, ranging from 0.03 percent to 0.14 percent, which is not none but is impressively less than the Western world’s approximate average of 4 percent or more, which translates to one in twenty-five people. In some US regions today that number may be as high as one in five.

And disturbingly, the prevalence of sociopathy in the United States seems to be increasing. The 1991 Epidemiologic Catchment Area study, sponsored by the American  National Institute of Mental Health, reported that in the fifteen years preceding the study, the prevalence of antisocial personality disorder had nearly doubled among the young in America, It would be difficult, closing in on impossible, to explain such a dramatically rapid shift in terms of genetics or neurobiology. But we wonder if the decline of the American family unit and the increase in divorce creates a failure to bond among the infants who formed these population groups. Failure to bond beyond the umbilical chord is a recipe for serious personality disorders.

Apparently, cultural influences play a very important role in the development (or not) of sociopathy in any given population. Few people would disagree that, from the Wild West of the American past to the corporate thieving outlaws of the present day, American society seems to allow and even encourage “me-first, me-only” attitudes devoted to the pursuit of domination. They certainly seem willing to vote for such traits.

Robert Hare writes that he believes American “society is moving in the direction of permitting, reinforcing, and in some instances actually valuing some of the traits listed in the Psychopathy Checklist — traits such as impulsivity, irresponsibility, lack of remorse”, ruthlessness and misogyny.  (Robert D. Hare, C.M. is a researcher in the field of criminal psychology. He developed the Hare Psychopathy Checklist, used to assess cases of psychopathy.)

This is a very good time to talk about nuclear disarmament.

Do not let Trump prove the fear that because of the proliferation of nuclear weapons some day another lunatic like Hitler will come along and have the power to destroy the Earth.

Whatever the United States does about Donald Trump in the White House is America’s business, but giving a dangerously unstable sociopath the codes for the nuclear weapons is a global problem, and America, on that you don’t get to decide that it’s OK.

There is another way of looking at the North Korean crisis. The DPRK leadership became terrified that the USA would destroy the small country if Trump won the 2016 election so it accelerated its nuclear deterrence program.  That’s what Mr. Kim is claiming along with others in his government. It is not far fetched.

Donald Trump’s legacy can be honorable. He can be the guy who sets the example of why humans cannot be trusted with mass destruction weapons. We continue to elect complete psychopaths to public office. Look around the world. This is clearly a problem.

Footnote: Donald Trump is a misogynist who encourages misogyny and a rape culture in America. Trump’s attacking the rights of women all over the world has made America no friends at all. His bringing the world to the brink of nuclear war has alienated many people but also helped him become a concern for Dr. Bandy X. Lee, an internationally recognized expert on violence who has correctly asserted that Trump has a personality disorder.

A personality disorder is not a mental illness but during periods of exacerbation a person with a significant personality disorder can become very ill, mentally. Trump shows signs. That’s a severe problem. This warning that has proliferated is going to cause people in the White House and various congressionally mandated departments to watch Trump more carefully and moderate the problem. We expect a good result from what we have done in warning people. The RINJ Foundation