Did you ever ask a Houthi how many Houthis does it take to screw in a light bulb? FPMag once responded to a harassing gaggle of catcalling Houthi men with that question. It made their mouths drop. For some reason they became serious. The banter stopped. I’ll tell you the answer in a minute after you read this.

The Global Coalition to Protect Education from Attack says that, “Air strikes and bombings affected as many as 1,500 schools and 100 universities in Yemen. Individually targeted attacks by non-state armed groups killed or injured almost 100 university students and personnel. Armed forces and non-state armed groups used dozens of schools and universities for military purposes, particularly in the contested city of Taizz, and there was at least one case in which two children were recruited at a school.”

A rebuttal to Donald Trump by Melissa Hemingway 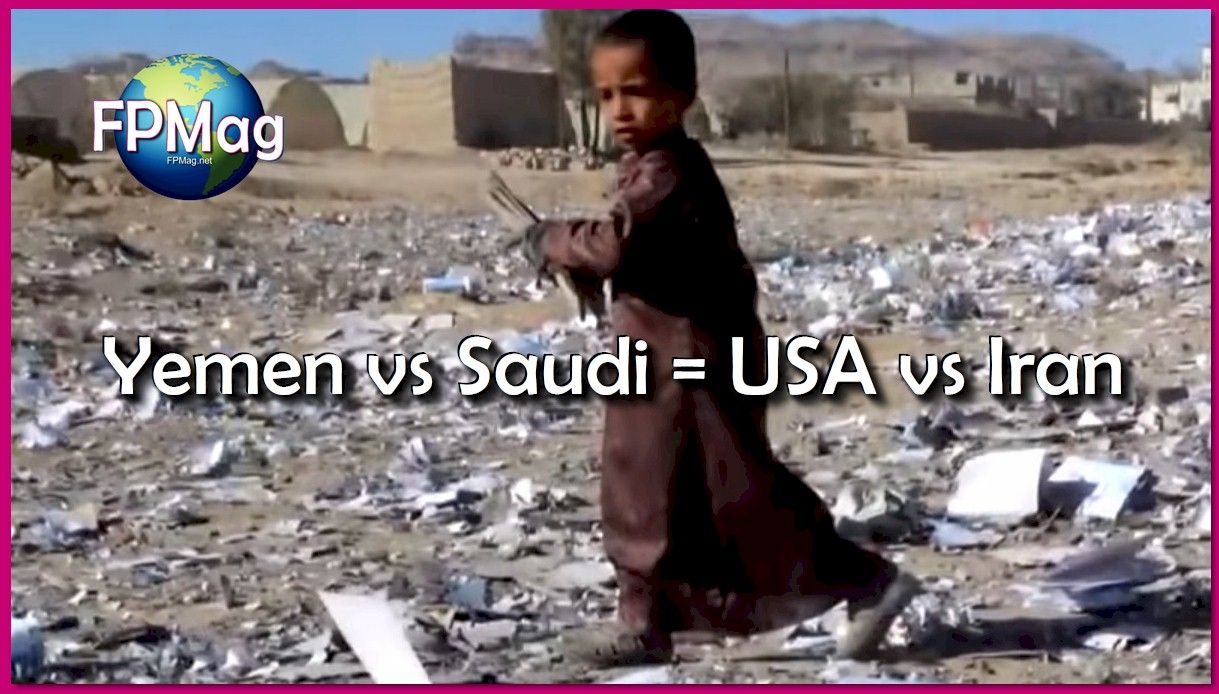 1. The first point to this is that Houhtis are not spending much time in school since the United States and Saudi Arabia attacked the country in March of 2015. University research departments in Yemen are not inventing ballistic missiles and sophisticated hi-lo-lo-hi-lo flight profile laser-beam riding TV-guided missile launching drones. In this image you see school books and class papers everywhere following school bombing by Raytheon-made bombs.

2. The second point is that when you think of indigenous weapons invented by the Saudis and the Yemen Houhtis, think along the lines of old muskets and swords. The ordnance that is flying through the air cutting children’s legs off is made in Iran, Russia, Britain, France and above all, the United States.

3. Finally, the world knows it’s a surrogate war between Iran & America so why play games? Why pretend, Mr. Trump, that you don’t know Iran just hit you back where it hurts. Oil. Just like Americans bomb children at school; kill kids at family celebrations like weddings; and drop tons of explosives on school buses; Iran bombed the Trumpists’ oil. Suck it up and stop the violence you do for the sake of putting cash in your trousers.

Got the picture, Mr Trump. Mr. Pompeo? Now eat your locusts. You want to bomb 16 million Yemenis back into the dark ages where they eat locusts to survive? You eat them too.

America and Iran manipulate Saudi Arabia and Yemeni Dumbasses to fight their battles.

So instead of slaughtering millions of innocents, the world’s people should put the two murderous sociopaths in the  boxing ring and let them duke it out. Trump vs Rouhani.

Neither side, not Saudi Arabia nor Yemen, has developed weapon systems on their own like those that are killing families in Yemen. The weapons come from Britain and the United States as well as Iran and Russia, France and others.

In 2015 Saudi Arabia invaded Yemen at the urging of Washington DC and since that time, the military-industrial complex of the world has paid its executives gobs of cash and put millions of ordinary people into desperate misery.

Boris Johnson, Michael Pompeo and Donald Trump will deservedly be found guilty of war crimes. Anyone in scrubs who glided to the side of an inbound stretcher with a little toddler nearly cut in half at the waist by these men’s bombs would feel the way I do.

I once thought I was wiping the sweat from the eyes of a surgeon as she sewed and sewed and sewed. They were tears, I finally realized. Nobody sweats that much. I had to quit nursing. I can never see that again. I can never feel that again. This is the world these horrible men have created for women and children to suffer within.

The answer was more innocent than the question, “We don’t have any light bulbs. They were all broken by the bombs.”