Ten important news updates for every Philippines family to discuss before getting tested for HIV and HBV. 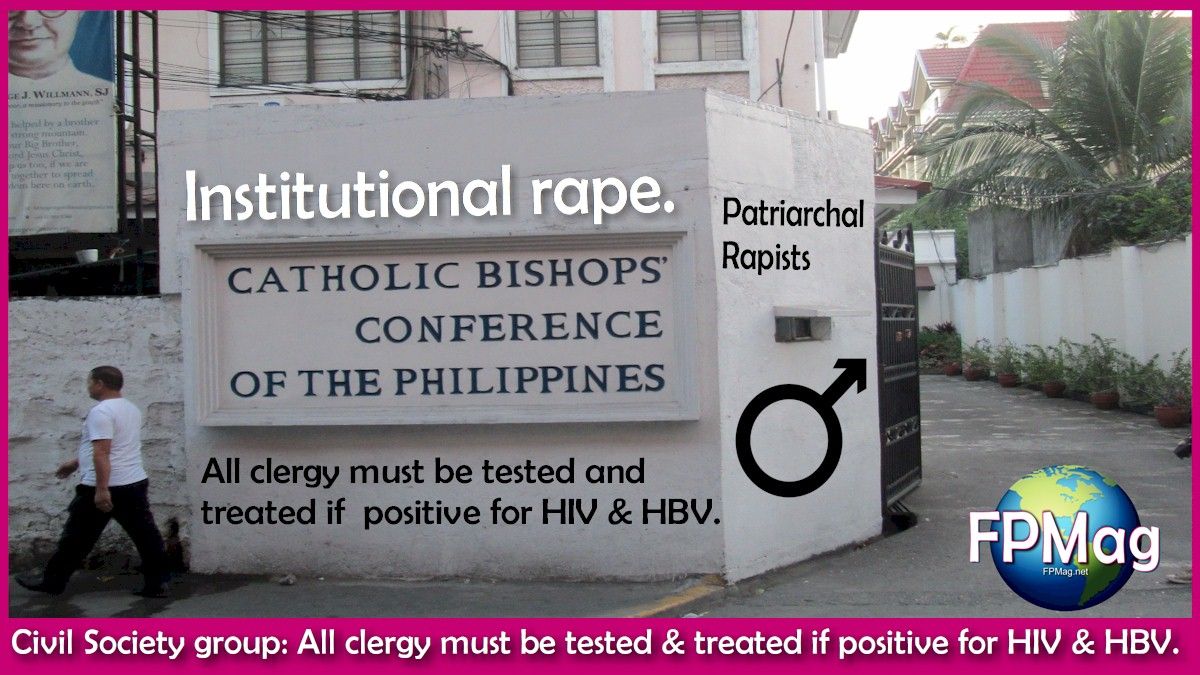 This weekend FPMag  interviewed a female security expert and former soldier now employed by a mercenary-type organization that protects women and children in war zones. This woman is in the Philippines to work with and train local private security to assist a family whose child must testify about a sexual assault crime. The family has determined the child to be at risk and private security is indicated.

FPMag will publish today the rest of that report but in the meantime decided to share some of the background research FPMag conducted prior to the interview in order to understand why there is such a need for witness protection in rape trials in the Philippines. 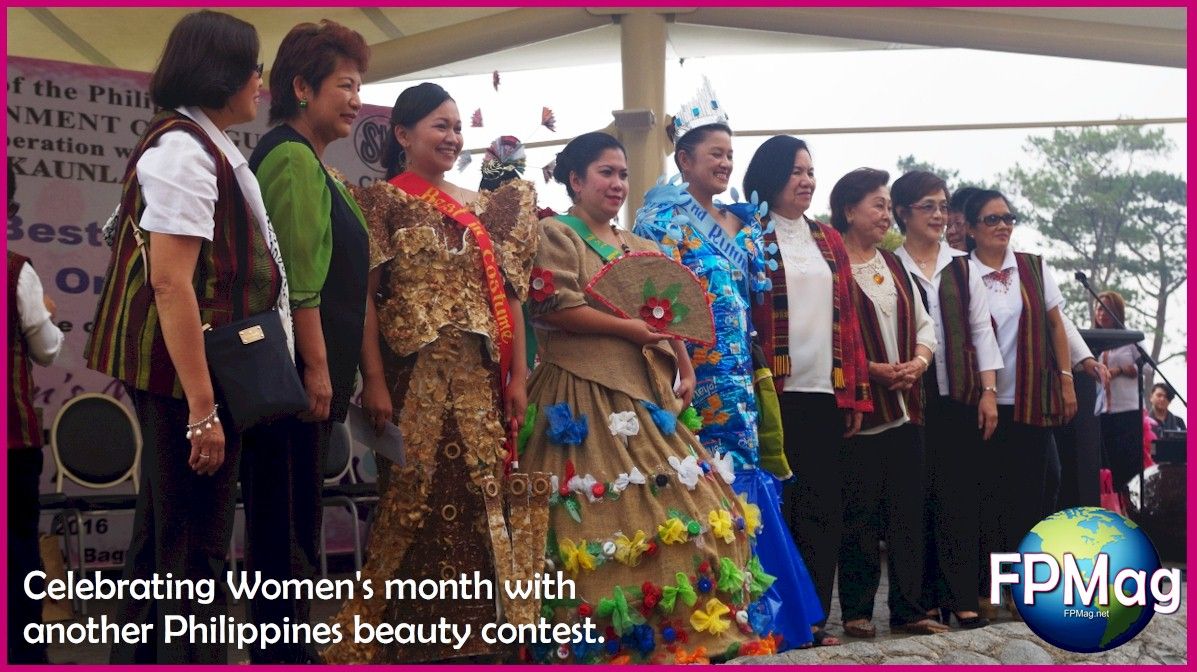 “Philippines Women’s groups may have missed their mark by not focussing on the issues of the 21st century,” says feminist Rosa Yamamoto.  “The country is consumed with beauty contests which in reality add little or no value to the lives of the vast majority of Philippines women,” she added.
Photo Credit: Melissa Hemingway
Photo Art/Cropping: Rosa Yamamoto FPMag

* The RINJ Foundation reports that it has over 100,000 members in the Philippines.

“Rape survivors are at considerable risk if they speak out about the crime committed against them,” says a data analyst, Fred Harris, working for The RINJ Foundation.

In the Philippines the jargon is rape/slay. That’s important because those two crimes are seldom connected. Philippines women do not generally report sexual assault crime and children in absolute terms never report the crime to authorities.

Recently, many convicted murderers who also raped their victim were released from prison into the public.  The President of the Philippines jumped on the problem and slammed the individuals involved demanding certain prisoners return. There are no accounts yet of the damage done before President Duterte’s dragnet re-incarcerated the capital criminals.

The Rape / Slay connection is often not made because the body is never found or the cause of death is not definitive and never connected to sexual violence. Why?

According to nurse specialist Michele Francis, “In most cases reported by families, usually siblings, the victim has been raped many times and finally finds either desperation or courage to make an attempt to report the crime by confiding to a friend who betrayed the trust or making a threat to report the crime if the perpetrator does not stop. They then go missing. That is a statistic, not an opinion.”

Despite Philippines President Rodrigo Duterte’s potty-mouth rape jokes, his deeds are different. It is no joke that Duterte is intolerant of child sexual assault. That’s good because in absolute terms, mature adult women are seldom raped in the Philippines as compared to children. The vast majority of sexual misconduct is directed at children and very young adults.

As recently as March of this year, an obviously upset President Duterte said, “To the priests who raped children and fondled *—*, you s*ns of b*tches, I will really kill you. Why should I be afraid? If you all get killed tonight, that would be better. Then we will have a better world…”

In February, the Philippines was shocked to hear of a priest raping a four-year-old.

In early September the public became aware of an American priest who had built a church in the Philippines decades ago and began raping boys as young as 7. Twenty or more victims have come forward. More may be heard from yet.

This conduct of the Catholic Church has  continued for decades.

In 2002, the Philippines’ national conference of bishops ended years of silence to admit that the church faced “cases of grave sexual misconduct” among the clergy. One archbishop estimated that 200 of the country’s 7,000 priests may have committed some form of sexual impropriety. The bishops promised new rules that would “provide steps for profound renewal.” Cite: SunStar

“His emotion,” said one medical practitioner who provides care to victims,  “is likely shared by most of an entire country if not all around the world”.

That would be hard to prove but notably there has been little protest against President Duterte’s emotionally charged reaction to recent and continuing news of heinous crimes committed by clergy persons against Philippines’ children and young persons. The silence might be an endorsement of at least the emotion.

“Don’t kill the sex offenders, says nurse Francis, “we need them in prison where we can study their brains and help society catch the other offenders like them.”

In recent months in the Philippines a small number of priests have been murdered. Not much data is available. Neither the Catholic Church nor the government has provided much information.

Age of consent in the Philippines is 12. That is the lowest age in the world. It should be raised to the global universal standard of 16 say most human rights activists.

Institutions in the Philippines including indigenous NGOs and government organizations are faced with the bandying phrases like maruming babae which is a form of victim blaming. Victim blamers don’t seem to realize that they actually make the situation worse by encouraging a culture of rape combined with a culture of silence.

The Philippines Department of Health (DoH) is obviously struggling with the impact of sexual violence. Statistics are shockingly revealing but the language the DOH is a potpourri of 1950s-era disaster recipes.

The DOH claims to seek a “gender-fair and violence-free community where women and their children are empowered“. That raised more than a few eyebrows among the women FPMag spoke with on the matter. 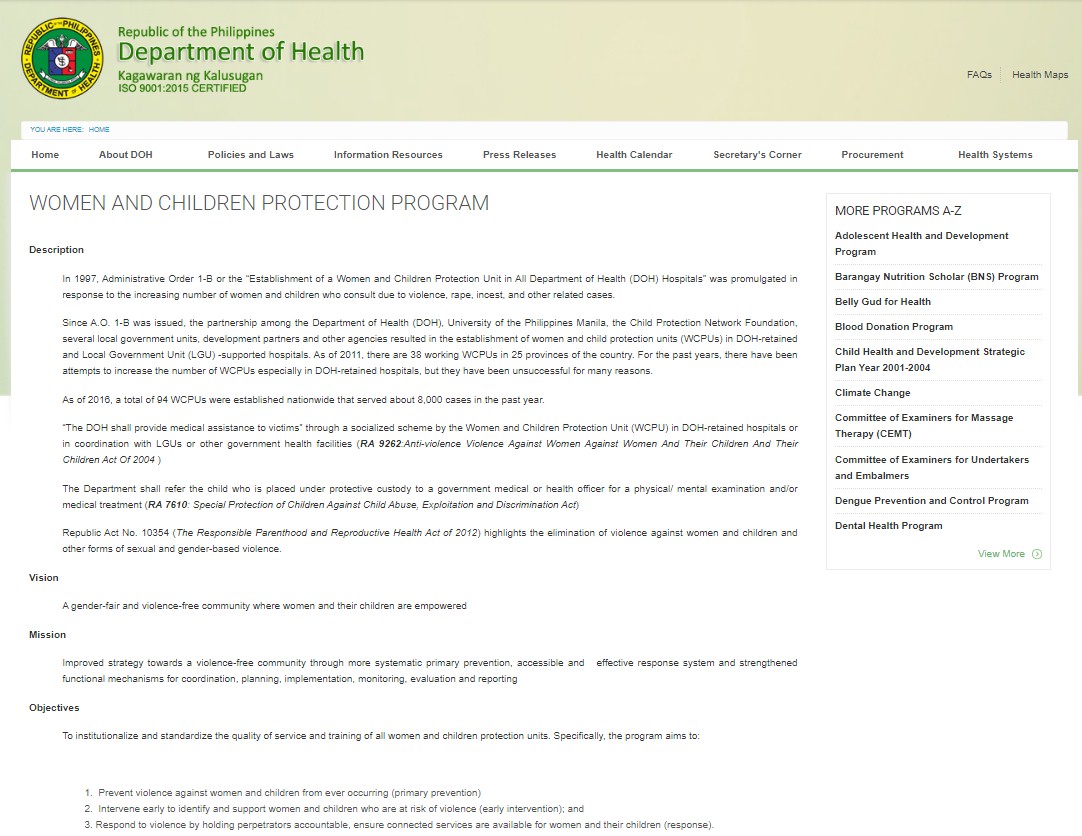 The Philippines Department of Health and the HIV Epidemic

According to UNAIDS, of the very small percentile of the global population tested for HIV there were approximately 36.9 million people worldwide living with HIV/AIDS in 2017. Of these, 1.8 million were children (under 15 years old). An estimated 1.8 million individuals worldwide became newly infected with HIV in 2017 – about 5,000 new infections per day.

The RINJ Foundation has estimated that more than a million persons, about  0.8 % of the population of the Philippines, is infected with the HIV virus.

The global NGO also tells patients to “stop worrying about HIV Stigma; get tested; and start treatment to  suppress HIV to below detectable levels. You are then a hero and HIV-non-contagious”.

According to a volunteer who spent three months in the Philippines working on the HIV project for The RINJ Foundation:

“The Philippines government doesn’t seem to receive the data, because its public is terrified of its government hence will not get tested and will not report medical issues that are probably symptoms of acute retroviral syndrome, the early stages of HIV.

“The other factor is that HIV testing may in this ultra-religious country require revealing that the infection is the result of  rape with all of its attached stigma and complications. That’s too much impediment. Patients say they will not seek help from the government-operated agencies. They are terrified of their government.

“But in fact, in my experience, getting tested and starting treatment makes the government happy with the Filipino citizen,” she added.

In the DoH, the mentality needs some work.  There is an “us vs them” approach and an unrealistically elevated sense of entitlement among practitioners plus a quest for money and a great disdain for the poor. Workers seem to be underpaid based on work description but maybe overpaid based on performance and attitude. This is only a small straw poll but it is terrifying.

FPMag interviewed ten medical practitioners in hospitals of the Philippines and learned that the consensus of this straw poll was that:

The Spiritual leaders of the Philippines have a Lock-Step Following of about 85 million persons. Sadly the Church is the Quintessential Pervert

Among the worst offender in the Philippines‘ institutions is the Catholic Church. An Associated Press report on 9 September  suggested that, “In the Philippines, the church has long shrugged off the presence of sex offenders and the criminal justice system often ignores the problem.”

Most women’s groups in the Philippines are political dynasties that focus on their founders’ prosperity. None have resulted in a significant change to the rapidly increasing rate of incest and rape of young persons and children, both male and female.

In fact, rape culture is so bad that the crime of forcible rape is considered a social norm in the Philippines say numerous reports.

“In the Philippines,” says UNICEF,  “thousands of children are robbed of their childhood, and suffer lifelong developmental challenges, as a result of violence. Impacts include both mental and physical health disorders, including anxiety, depression, cardiovascular disease, as well as health-risk behaviours including smoking, alcoholism, drug abuse and engagement in high risk sexual activity.”  Read: National Baseline Study on Violence Against Children in the Philippines Results

What people don’t seem to widely discuss is that the children and the most vulnerable of young women and men are the victims.

Children are the forgotten victims of sexual violence in the #MeToo era. The RINJ group runs an annual awareness campaign against child exploitation for the purpose of quashing the child sex trade. The Philippines has been significantly victimized by international criminals, even from America.  A Sacramento man convicted of Traveling to the Philippines to have sex with minors, produce child pornography (almost 30,000 images), and buying Philippines children – The RINJ Foundation Women Sought Consecutive Life Sentences for each Child. It is expected Clemans will never see freedom in his lifetime. Other persons in the Philippines were convicted in the same case.

General Child Protection in the Philippines

That begs the question: “Why didn’t the Manila-based government department know of these statistics which according to regional doctors are very common and likely understated? Said one who feared reprisals. “You hear reports regularly of fetuses floating down a stream and a bleed-out kid somewhere else. Where are the parents?” the doctor asked rhetorically.

In a couple of million cases, the mothers are outside the country working as overseas foreign workers, sending their money home. That is the mainstay of the Philippines economy.

That the government of the Philippines for decades and plus its various women’s groups and other NGOs have failed miserably in preventing sexual violence, there is no doubt based on preponderance of the crime.

As referenced previously The RINJ Foundation urges these sentencing guidelines on conviction of a rapist. FPMag found other agencies were suggesting the same general principals.

* Use prison terms ranging from 10 years to 30 years to life;

* Use life without parole for forcible rapes of victims under 14;

* Use a range of 7, 10, or 15-to-25 years for rapes of adult victims, while using a 30 to life term when a sexually violent repeat predator specification is proved;

* For 15-year + sentences, impose a mandatory release-review by the sentencing court, available after the minimum term is served, parallel to the Parole Board’s reviews. If either entity rejects release the term is extended by another year. On failing a review at that time, an application can be made each three years;

Definition of  rape. From The RINJ Foundation, FBI, US DoJ and others.

Sexual penetration without consent is rape.

In the absence of clear, positive agreement for sexual contact there is no consent. Lack of consent is the crucial component of sex crime. Sexual conduct becomes criminal when sexual touch is not consented to, either because the offender forces another person to be sexual against his or her will, or because the other person is considered incapable of consent or to have a diminished mental capacity to give consent.

Those who are deemed incapable of consent include: