When government is the enemy of the people. Part II:
The problem with China is Chinese men like Xi Jinping 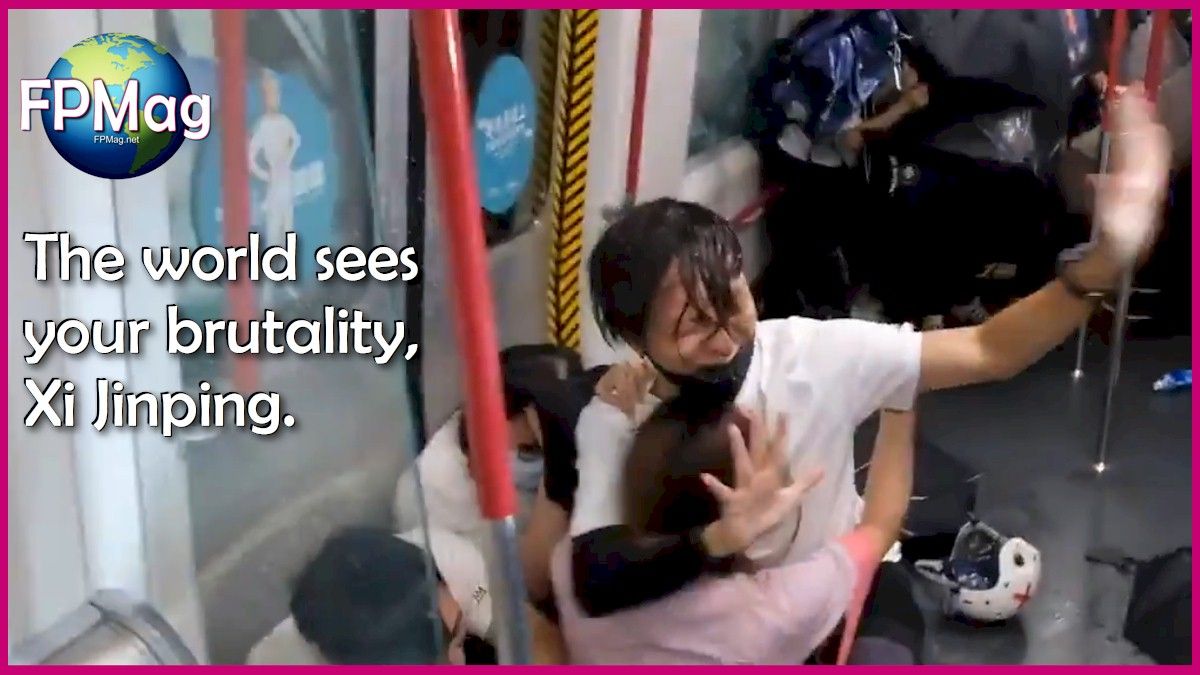 “The world sees your brutality,” say Hong Kong’s students today (local GMT+8) in a response to Beijing’s threats that the students will be ‘ended’. Thuis was the first day in a new series of school strikes. Faculty members at Universities have been encouraging students to act on their beliefs and their fears.

The picture and its story.

Four of Hong Kong’s children huddle from XI Jinping’s battery. Battered kids cry in a corner seat after being beaten with batons by Beijing’s storm troopers.  They were headed home on the subway train. This week Hong Kong’s High School and University students are on strike. Now they cry in pain as they are huddling for protection. Photo Credit: Video capture from “Students for Freedom” Video. Police beating children 12 years and up is a daily occurrence in Hong Kong say protest groups. Witnesses and their photographs plus videos support the allegations.
Photo Art/Cropping/Enhancement: Rosa Yamamoto FPMag.

Katie Alsop of the RINJ Foundation counsels the students and children that they are correct to speak out; they legitimately ask to be allowed to live in Britain; and they have the right to demand safety for children and their families. “You are not doing anything wrong, but please stay safe.”

Students must Talk to Humanitarian Services in Hong Kong

Britain has a huge responsibility. The Experiment Failed and Hong Kong Cannot be Part of China. The same is now true for Taiwan and Tibet et. al.

“It can be said that unless a citizen of China wants to grow old suffering from deep physical wounds administered by the state during childhood when a school protested injustice, accept totalitarian rule and keep a low profile until your escape,” says a protester who wants only to be identified as Elaine. She must be all of 16.

Trump’s ‘Boy-Xi’ is another Psychopath the world did not need.

Donald Trump says Xi Jinping is “a very nice man”. Coming from the ultimate anti-Christ on his high-horse populist platform of Zero-Empathy for the ethnic-poor and hungry of America, this is not surprising. Deeply disordered personalities attract each other, then fight like fiends.

Xi Jinping is a genius statesman and also a psychopath of no small measure on the evidence of his conduct.

A video supporting the safety of women, children, and their families in Hong Kong:

Literally for decades the entire population of China has been brainwashed against the Buddhist-like Falun-Gong community of China to the extent that closed-door mass trials and disappearances are actually supported by the population.

Guards rape the Falun-Gong/Falun-Dafa  inmates in large concentration camps and then sedate their victims while organ harvesters enter the facility to retrieve vital organs, especially from younger women, to be provided or sold to the elite of China and additionally sold in the high-end black market.

Among the medical actors involved in this regime are some of the medical practitioners who have played a role in the Islamic State and other terrorist organizations organ harvesting crime rings that stretch from Yemen through Iran, Russia, Iraq and Syria to China.

Nothing happens in China without Chairman Xi orders.