It is hard to believe the Turkish invasion of Syria has humanitarian aims when the leader uses 3.6 million souls as cannonballs.

What should all NATO countries policy be toward Turkey’s preventing a Marxist/Leninist corridor along its border?

Despising Erdogan’s belligerent authoritarian and despotic moves over the past fifteen years, are some of the brightest leaders in the world.

That plus Recep Erdogan’s threat to push nearly four million displaced persons toward Europe are black stains on Turkey’s leadership, not the Turkish people.

In any case, he is a hero today to the Turkish people who back “Peace Spring” wholeheartedly, which the United States originally backed during a phone call between the Turkish and American Presidents.

Fighting for the safety of Turkish communities is important. Support the Turkish People. That’s the answer.

by Micheal John and Melissa Hemingway

Manbij, for the USA, is now over. That’s certain. 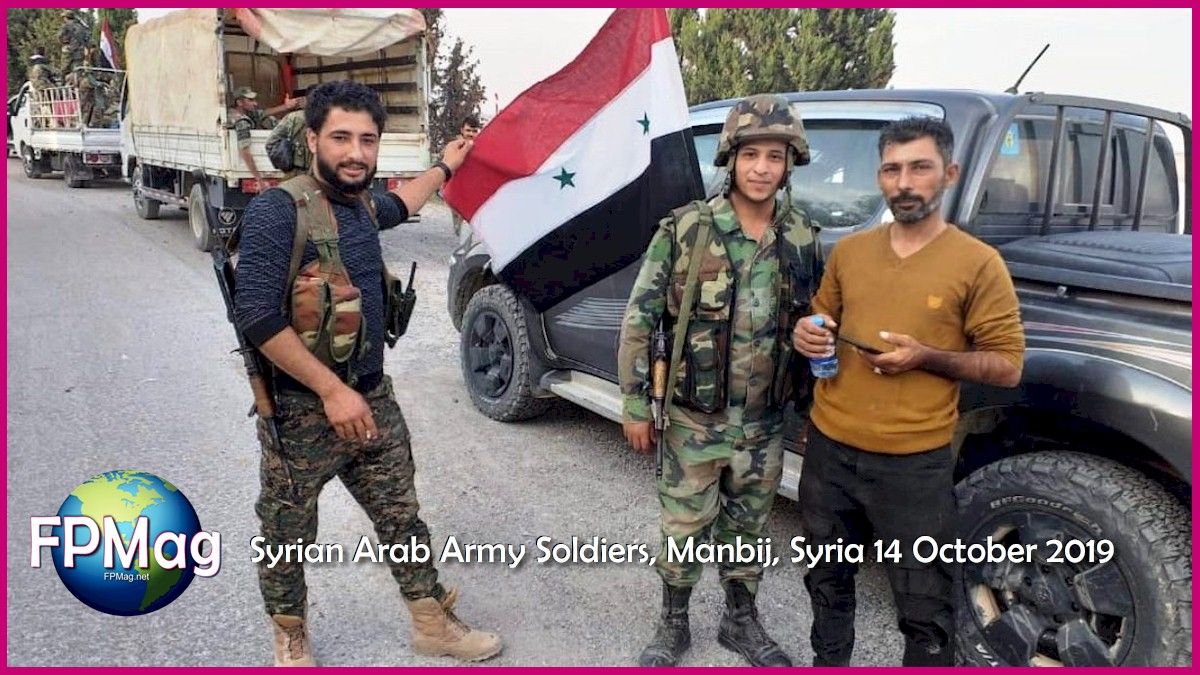 Fighters of the SDF which is comprised primarily of the PKK / YPG have within hours of the American withdrawal from Manbij penned a deal with the Syrian Arab Army of the Bashar al-Assad Regime to allow the Syrian Arab Army to take over any or all of the PKK / YPG territories it had previously grabbed from the Islamic State with the help of American funding; armaments; plus air support.

Turkey has been saying for two years it intends to clear out the terrorist areas along its borders.

The evidence is colossal to support the Turk’s arguments for going into Turkey to prevent the Marxist  PKK / YPG groups from establishing statehood along the Turkish border. The YPG is the military wing of the Democratic Union Party (PYD), a group that was spun out of the PKK in 2003. The PKK has waged war against the Turkish government for decades.

The PKK / YPG group is also an organized crime group that The RINJ Foundation claims is a child slave trader and that it operates dozens of child soldier boot camps in the Middle East and in Europe. The United Nations supports this allegation.

The United States is spreading disinformation to cover its tracks for exploiting Child Soldiers. UN sources say the “day is not done” on whether or not the USA will be held to account for these serious crimes in Syria.

The RINJ Women’s group also says in its White Paper on Misogyny that Mr. Erdogan is an authoritarian and that history sets out that 100% of authoritarians have also been misogynists.

“We now fear for the Turkish people,” says a statement released by the civil society group at the end of 2015, “because we are beginning to wonder if the figurehead Turkish President who pushed out the lawfully elected Prime Minister and installed a Gestapo-like secret service in Ankara is a MONSTER?”

Recep Tayyip Erdogan has been quoted in media around the world saying often that promoting and practising birth control is a high crime of “treason” in his country.

Erdogan is also quoted in The Guardian as saying that  “Turkish women are primarily “mothers” and must have at least three Muslim babies each.”

“In late 2014 comments by Turkish President Recep Tayyip Erdogan,” adds The RINJ Foundation’s statement, ” indicated that he felt that women and men are not equal “because their [women’s] nature is different.”

Needless to say, one of world leaders who is very distrusting of Turkey’s President Erdogan is Angela Dorothea Merkel the Chancellor of Germany since 2005. Germany has demanded an immediate cessation of hostilities.

Turkish intelligence, reputedly among the best in the world, are advising the Turkish leader along with Military advisers in last week’s adventurous invasion of Syria’s North.

Hopefully the best and the brightest will encourage their leader to get this done quickly and get out.

Annexing part of Syria is not going to fly.

Apparently it was to no avail Donald Trump and his Vice President demanding that Turkey implement an instantaneous ceasefire in Turkey and Syria in the cross border fighting with the Marxist/Leninist groups under the PKK umbrella.

Allegedly a USA  delegation of Vice President Michael Pence and Secretary of State Michael Pompeo is on its way to Turkey with a belief that they will mediate between the terror group and Turkey. Mr. Erdogan has said, “there is no way that Turkey is sitting at the same table as terrorists.”

The world has never seen anything like what is coming from Washington DC and must rule out anything that comes from that quarter. The USA has been involved in the killing of huge numbers of child soldiers in its war against ISIS. That is not only disgraceful but is also the lowest and most serious of war crimes.

The people of the United States have ignored the Pentagon using child soldiers to fight the Islamic State. America, which has bombed school buses in Yemen and starved over 30 million children in North Korea and Yemen, seems to have dulled its cognition of international law and hides behind an apparent impunity for crimes against humanity. It lacks any shred of credibility.

American troops in place in Syria are apparently maybe leaving or maybe not leaving despite their being unwelcome; despite their saying they are leaving/staying/leaving/staying/leaving in that order. On the ground from Manbij, Deir Ezzor, Raqqa, Idlib and Aleppo, enough humanitarian workers are saying they have spotted American personnel  to imply the US is staying in Syria.