“Few dogs are as dirty as was Abu Bakr al-Baghdadi.”

In Mosul you could tell he was around because the area would smell like a ruptured septic tank, and there were plenty of those,” said Monique Deslauriers, a medical worker formerly at a now-destroyed Mosul hospital.

“The psychological trauma for many people is such that some of the misery subsided slightly knowing the sick-minded ghoul Baghdadi will never come back; and secondly because he was taken out by a woman who even stole his underpants for DNA comparisons,” says Monique.

“I watched President Trump’s speech between five and a million times, it felt so good,” Monique added. It is thus fitting that a woman opened an expanding thread of events that eventually led to Abu Bakr’s death last Saturday, 26 October 2019.

Monique had been one of the women in a controversial protest  group of feminists which included Femen and RINJ Women.

These women had been rallying against ISIS in the early days of al-Baghdadi’s outrageously malignant activities. So outward were the feminists’ protests, many were arrested in Russia and in a few European cities. Nevertheless those countries produced a surprising number of ISIS fighters. Abu Bakr al-Baghdadi was an Iraqi.

Civilians lost wives, children, husbands, grandparents and the most treasured and beloved centuries-old landmarks of Mosul.

This was a personal blow because women in ar-Raqqa, Tal Afar and Mosul had been passing target locations to the Jordanian coalition contacts so that the young pilots could deliver a blow back at the Da’esh. It was working fine until this.

“Sleazy Abu Bakr al-Baghdadi pretended Yousef was alive,” Monique Deslauriers continued by phone, “and tried to get the King of Jordan to pay a large ransom. This hero was already murdered by Baghdadi’s berzerk lunatics in 01-2015 in ar-Raqqa.”

“I hope the courageous soldiers will hunt down the rest of the Sharia Council that governs ISIS and also have their women steal those men’s underpants, as was done to Baghdadi, so that their DNA can be checked after they are butchered like fat pigs. That’s what happened to ‘fatso al-Baghdadi‘,” said Sonya, an angry feminist you will meet as you read on.

“Women in every part of the Middle East must Rise Up and turn in the men who have enslaved them,” she added.

“ISIS is a sick cult and its women followers suffer sad mental illness from constant abuse and brainwashing. Yes, that’s why these women have strange thoughts. Because of the men’s abuse,” she stressed with considerable emphasis. 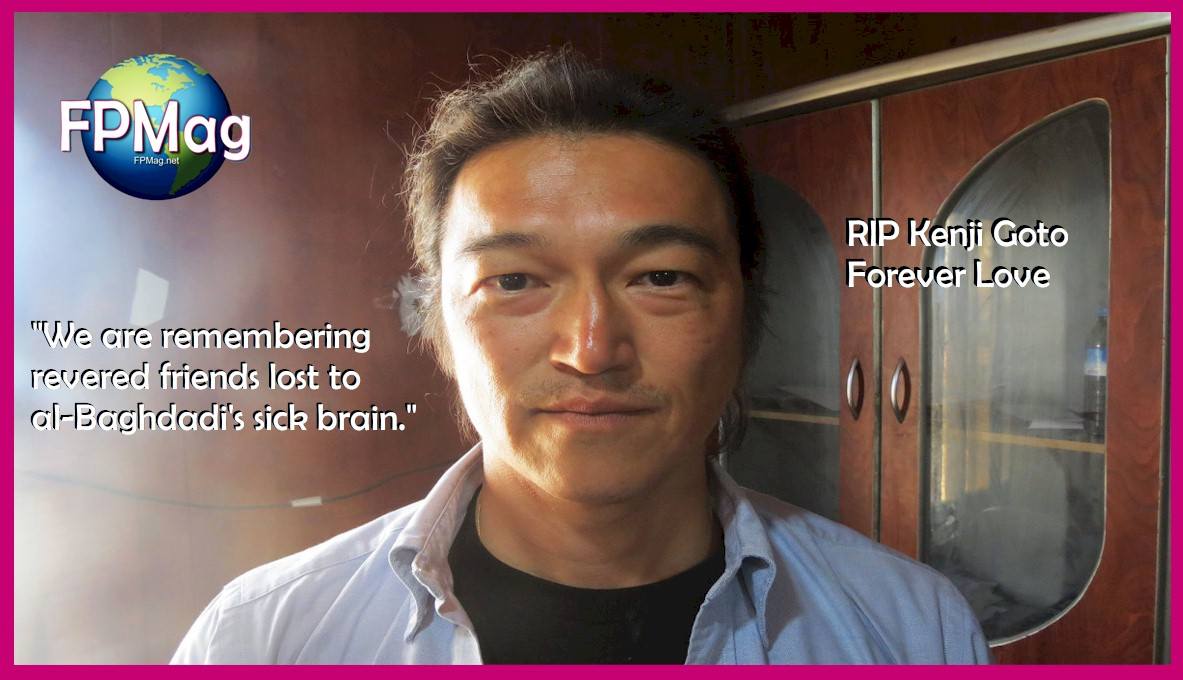 “We are remembering revered friends lost to al-Baghdadi’s Sick Brain,” say the feminists. Kenji Goto was a Japanese freelance video journalist covering wars and conflicts, refugees, poverty, AIDS, and child education around the world. In October 2014, he was captured by ISIS and held hostage by Islamic State of Iraq and Syria militants after entering Syria in the hopes of rescuing Japanese hostage Haruna Yukawa.

Outspoken hatred by women for al-Baghdadi goes back many years. ‘Women must continue to “rise up“,’ say the feminists that FPMag interviewed.

Baghdadi was ridiculed and defiled at the end of 2014, when anti-pervert-al-Baghdadi blogs began to appear, more so after a Jordanian pilot and Japanese hero-journo Kenji Goto were captured in 2014. 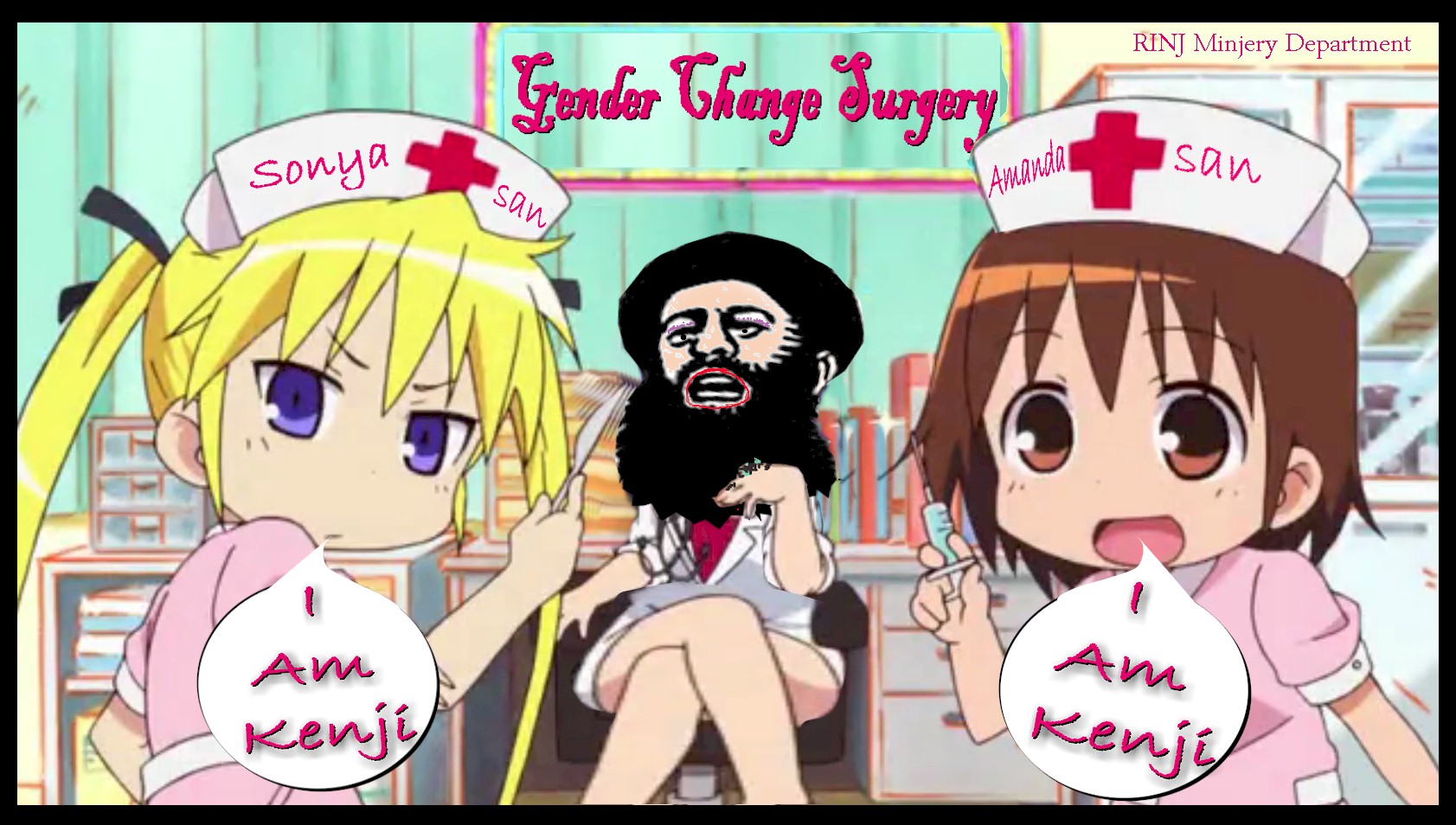 December 2014 – January 2015 “The person in this picture we did the gender change to is Abu Bakr al-Baghdadi who is the leader of a gang that pretends to be Islamic State (really they are Da’esh) and responsible for the Gender-based Violence going on against the Yezidi, Christian and Muslim people in Syria and Iraq as well as Nigeria and other places.
“Kill me baby” is the anime we use to ridicule Da’esh. They are so cruel to women so we brought that into the picture. Maybe if Daesh had a female leader, it would change activities to something more useful, like gardening or in some way nurturing Earth instead of destroying it.
“Abu Bakr al-Baghdadi is a long-time al Qaeda criminal and has a price on his head of over $10 million dollars [2014]. He and his other daesh gang members called the RINJ Foundation Women “MINJ”es so we setup the “RINJ Minjury Department“. Why not? If he can pretend to be Islam then we can pretend to be surgical assassins and turn him into a woman (chop chop) and now he can see what it is like to be among his people as a woman.
“Abu Bakr al-Baghdadi, a female in his own brutal world. Maybe if more Middle Easterners put themselves into a woman’s shoes, they wouldn’t treat them so badly.” Photo Credit: With Permission from Artwork Source.

“I don’t like President Trump’s misogyny but I did love his TV skit where he played the role of a President announcing the death of al-Baghdadi. I felt better hearing that the scumbag Daesh was whimpering before he died but I think I will take out twenty or more of his friends for each child he killed, said the woman in this image represented by the anime character, ‘Sonya-san‘.

Rage permeated a group of feminists which included Femen and RINJ Women. Both groups conducted highly controversial demonstrations in 2014 and 2015 to draw attention to the Islamic Patriarch of ISIS.

Donald Trump Wins High Accolades for Telling it “Like it Is”

“They are easy to spot in a Barrett BORS scope from Idlib to the Euphrates, and from Baaj to Kirkuk,” she added.

“According to Canadian-based NGO “The RINJ Foundation” which operates medical clinics in Mosul, rape cases in the city prove a pattern of genocide and will lead to a conviction of genocide against the Islamic State, in the International Criminal Court, a permanent international tribunal to prosecute individuals for war-time rape, genocide, crimes against humanity, and aggression.

“The Islamic State was in August 2015 reported to be selling captured women and girls to sex slave traders.”  – Citing The Belfast Child – Remembering The Victims.

The consensus of these particular feminist women FPMag was able to contact is that US President Trump did a “perfect job” of describing the demise of the “Baghdadi Daesh-Pig“.

I warned U Daesh scumbags who for 2-years die at the hand of a Japanese woman! Hell is full of you. Yes! PAYBACK IS A BITCH. RIP Kenji Goto. pic.twitter.com/F6xHpA0MXD