A taxi driver told FPMag on Monday that people are contemplating the murder of Duterte’s Vice President because Duterte has said he wants her “gone”.  Here is why. 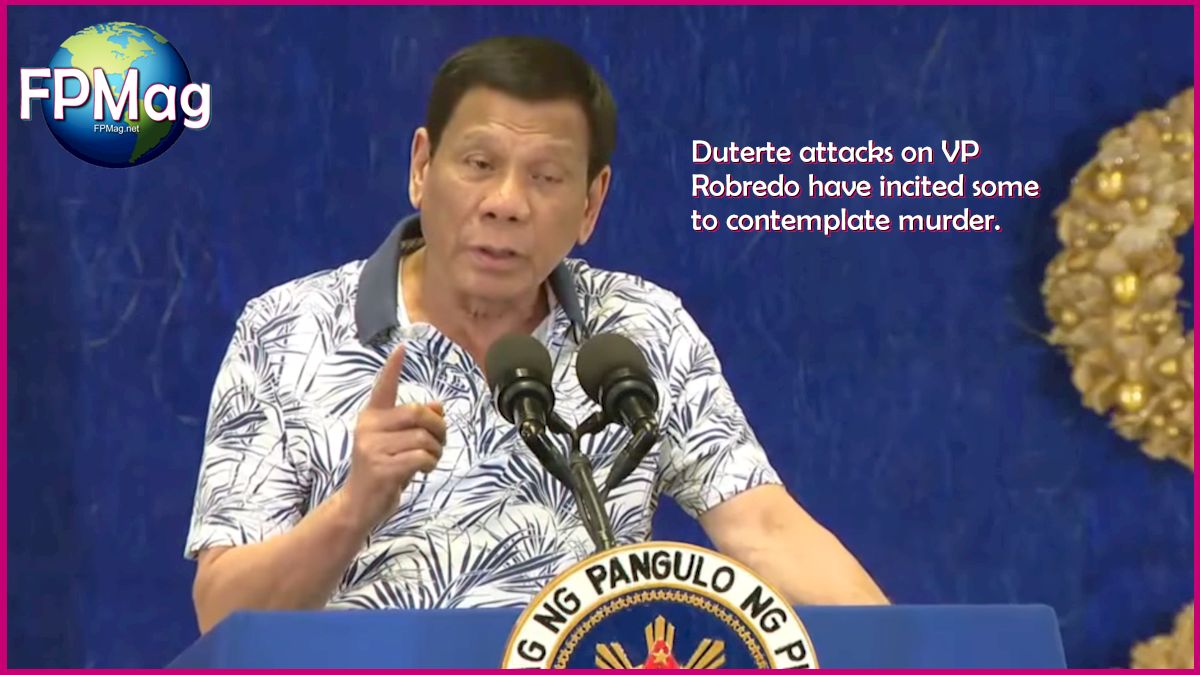 When asked why he would go so far as that, he said, “When President Duterte says he wants somebody gone, its not long before you read in the paper that they were killed by his gunmen.”

In October, in an interview with Reuters and other media, Vice President Robredo was critical of Duterte’s record on extrajudicial killings.

Duterte reacted by saying more or less, if she is so smart, she can take over the drug war. Critics then demanded that action. Duterte responded with tokenism, a bluff of sorts. But then Robredo began to do the job, for real.

GENEVA (23 November 2017) – United Nations human rights experts* have called on the Government of the Philippines to carry out prompt, impartial investigations into the high number of killings in the context of the anti-drugs campaign, to bring the perpetrators to justice, and thoroughly review its current policy in this regard, with a view to stopping further attacks taking place.

“A great number of new cases have been reported to us involving killings of men, women and children,” the three Special Rapporteurs said in a joint statement.

“Many of the killings appear to be perpetrated by law enforcement officials and by unknown assailants. This seems to indicate a climate of official, institutional impunity, which can only encourage further killings and other excessive use of lethal force by law enforcement personnel or those acting on their behalf or with their acquiescence.

“The Philippines is required to protect its population, and its Government has a positive obligation to take effective measures to protect the right to life. Failure to do so is a violation of the International Covenant on Civil and Political Rights.

The outcry for murder of drug users is in the open.

“The President’s undoing is that he has not annihilated the drug sources because of the outcry from countries, which do not have the same drug problem as ours, and from the local bleeding hearts.

“The drug problem is like a weed — for it not to grow back, the weed has to be uprooted or extirpated.

“Cutting or pruning the weeds will make it grow again.

“The government should go to the root or the source: the Chinese drug convicts at the New Bilibid Prison, politicians who protect drug traffickers, policemen who sell the drugs they seize, judges who acquit drug traffickers and peddlers, and prosecutors who deliberately file the wrong cases for an acquittal of drug suspects.

“All of the personalities mentioned above should be killed without mercy for the drug problem to be completely eliminated.” — Ramon Tulfo – Manila Times

The strange thing is that the Philippines does not have a drug abuse problem. The ‘Drug War’ is a distraction and a fake enemy of the people to distract from a Kleptocracy that may be the worst in the world.

According to the United Nations’ statistics the Philippines population has a 1.1% abuser rate which is below global averages.

“The prevalence of illegal drug use in the Philippines is lower than the global average,” according to the United Nations Office on Drugs and Crime (UNODC).

“Drug addiction is unequivocally a mental health concern wherein addicts need treatment, and mental health patients are not to be gunned down in the streets,” says Monique Deslaurier, a nurse practitioner who is currently leading a study into the nature of drug abuse in the Asia Pacific region for a global civil society women’s group.

President Duterte  appointed VP Leni Robredo to a somewhat subordinate role in the drug war office which from all appearances is a pretext. The “real drug campaign is run under the auspices of the Duterte Death Squad,” says a reliable source who is a police officer, unhappy with the EJKs.

This week, after Robredo gave several interviews and the Wall Street Journal published a headlined article “Philippine Vice President Promises to Clean Up Duterte’s War on Drugs“, hence the Philippines President said he wants her “gone”.

A source close to the President who is terrified of the man says that “he went crazy” when he “learned that she would actually do the job”. The source who likes to dine with female reporters does not want to be named.

Duterte Diminishes Robredo as his bluff becomes a disaster for him

Rodrigo Duterte in several appearances in front of the media in the past three days has declared he wants Leni Robredo, the elected Vice President of the Philippines “gone”. He says she is putting “the Republic of the Philippines in jeopardy” because she:

In contrast to these allegations of reporting secret information about the killings to United Nations Human Rights Commission officials,  Robredo said yesterday that she had thus far only met with Manila officials from, “UN Office on Drugs and Crime and officers of the United States Embassy [to the Philippines]”.

Following questions about what Mr. duterte meant when he said he wanted her goe, he issued a statement on Tuesday.

“Need to know lang siya. If she asks something, then you give her…you give her half of it. The other half, if it’s a classified information, there is no need for her to know,” President Duterte said during a press conference in Malacañang.

President Duterte said he can’t give Robredo a Cabinet position because she belongs to the opposition and may jeopardize government interest if she is given access to sensitive information.

The information is state secrets, the President said, which include everything from sensitive matters with the Philippines’ relations with other countries like China and the United States.

“I am not keeping her. She is there. I appointed her. She is working. As a matter of fact, she’s been issuing statements every day,” he said.

After backing down from his earlier remarks, wanting her ‘gone”, Duterte is keeping Robredo in her so-called Drug Tsar role to imply that if anything happens to her it is not his doing?

The record on these types of killings in the Philippines suggests that VP Leni Robredo is in clear and present danger.

Recently, Senator Leila deLima who  was an outspoken critic of Duterte’s war on drugs spent her 1000th day in prison as a political prisoner of Duterte.

Duterte’s misogyny is vicious and malignant.

The wish of Duterte to leave the Presidency for Ferdinand Marcos Junior is clear to many people. Thus far Robredo who is in the line of Presidential descendancy has foiled that effort by getting herself elected. Formerly she was a Senator with a steadfast record on human rights advocacy and government transparency—all the things Duterte hates.

Duterte says his police and his military need to know more about Robredo and that the fact of her election is not sufficient as a security clearance. For these reasons he cannot allow her to become a cabinet minister, despite the fact that she is the people’s choice in an alleged democratic election wherein he also won his elected office. 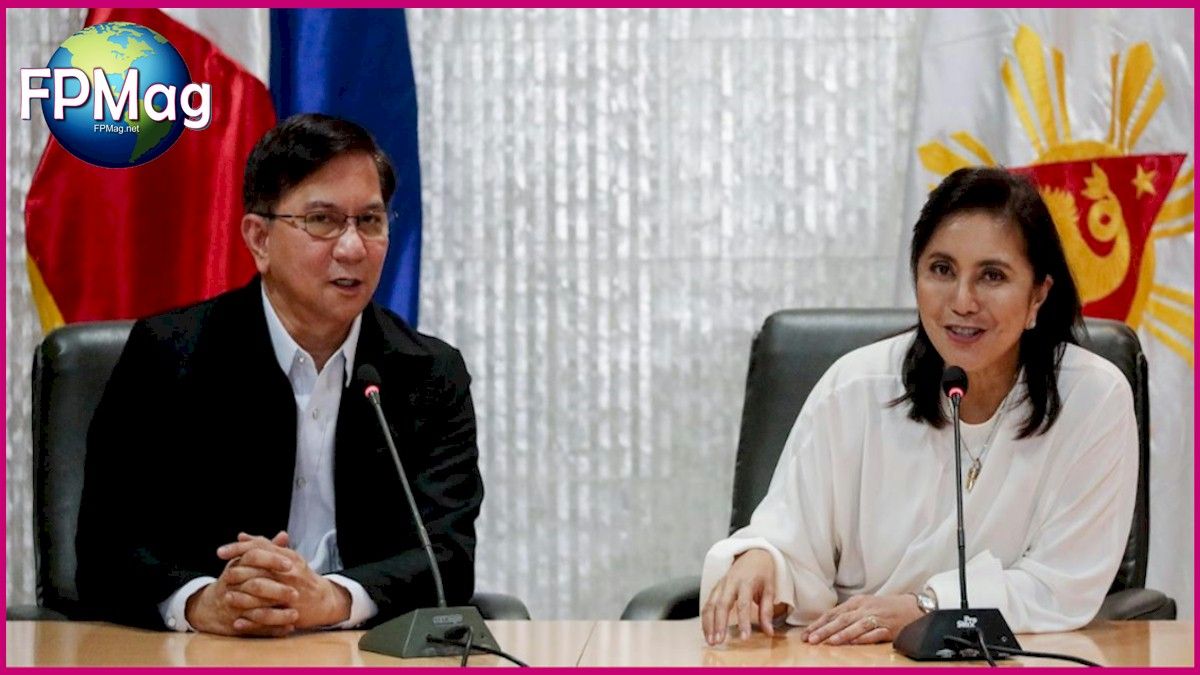