Facebook unsafe for Filipino women and children. A whistleblower tell all.

“The treachery of Facebook providing detailed personal information about netizens to the Duterte Regime endangers children and women in the Philippines,” urges a Philippines lawyer.

“And there is no help for people wronged by a criminal corrupt government,” adds the whistle-blower.

“The International criminal court is as strong as a wet Lipton t-bag dropped in the Ocean three years ago,” says a Davao City lawyer who doesn’t want to be identified for fear of being murdered by Duterte Death Squads (DDS). 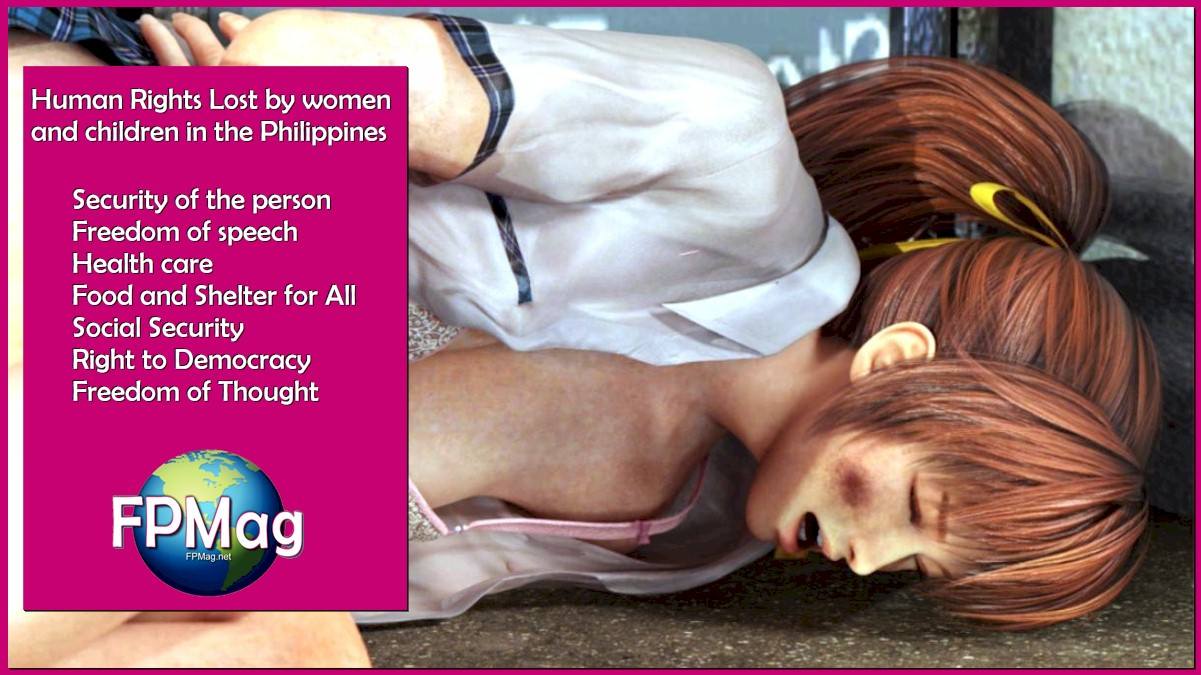 “Human Rights are Lost by women and children in the Philippines,” lawyers and activists in the Philippines tell FPMag writers in Toronto, Canada.
Security of the person, Freedom of speech, Health care, Food and Shelter for All, Social Security, Right to Democracy, Freedom of Thought — Image Art by Kasumi. Cropping/Enhancement: Rosa Yamamoto FPMag

Human Rights take a back seat as patriarch leaders scramble to protect their money-mining of their populations.

One might think that talking about male politicians as miners of populations for their own benefit is too cynical. If your leader is not that way, send us a note.

“Interesting to note about this lawyers comment, that’s how long—three years— the failed ICC organization has taken thus far to investigate and determine whether or not Rodrigo Duterte’s slaughter of tens of thousands of the poorest Filipinos is a crime,” notes Katie Alsop of The RINJ Foundation.

“What’s worse is that the elected officials in Manila sit back and watch murders like a cheering section for Duterte’s Malacañang Palace,” says the Davao lawyer.

“But when they put their hands in their pockets they find the money they have stolen from the people and remember the conditions by which their President overlooks their crime.”

“Leni Robredo, Duterte’s Vice President has sat back all these years and done nothing either. Duterte should have been impeached after being arrested for the many murders he has admitted to committing, but nobody cares about Filipinos, the power-base in Manila cares only about itself,” the Davao lawyer added.

“Meanwhile, continues the Philippines Court Officer, “hundreds of people have been posting on Facebook about the need of the people to support some nonexistent vigilante killers to protect themselves from Duterte,” she mused.

“It’s weird. The sad thing is that Duterte has done some uniquely positive things for the Philippines that nobody else has ever thought about,” notes Sharon Santiago who has covered the region for FPMag.

“We don’t know for sure if Duterte or some other rogue faction of his administration is behind this massive attack on freedom of speech and charging everyone with cyber libel. People call me crazy very often when they disagree with me and nobody was charged… maybe they will be now or does this just apply to calling the President names, like the Catholic Church says bad things said about Jesus Christ  is a mortal sin. Does Duterte’s administration  think they are above Jesus Christ now? See, that’s the thing. It makes no sense.”

“Thou shalt not take the name of the Lord thy God in vain” (Hebrew: לֹא תִשָּׂא אֶת-שֵׁם-ה’ אֱלֹהֶיךָ, לַשָּׁוְא) (KJV; also “You shall not make wrongful use of the name of the Lord your God” is the second or third (depending on numbering) of God’s Ten Commandments to man in the Abrahamic religions. — Wikipedia

There are no human rights in the Philippines, now rated as one of the worst places in the world for a family to live.

The Philippines government of Rodrigo Duterte has been asked again by ASEAN Member States to Release Leila De Lima, a Political Prisoner

Parliamentarians from Southeast Asia’s ASEAN states  have once again asked Philippines President Rodrigo Duterte to order the release of opposition senator Lleila de Lima without delay. This comes amid the quasi-martial-law pandemic lockdown, as the lawmakers joined The RINJ Foundation in denouncing Duterte’s decision to exclude the jailed legislator from the Senate’s online sessions.

Senator Leila De Lima has allegedly been too critical of Duterte, but that is her job as an opposition senator.

The Philippines has released over 10,000 prisoners who have actually commit real crimes, because of the global pandemic.

They call them Philippine Offshore Gaming Operators, or POGOs, which are run by both the People’s Liberation Army of China and crime syndicates. The two coexist holding their noses but at times in a cooperative vein. Some three thousand Chinese soldiers are in the Philippines as organizers and ‘enforcers’ says one politician.

These groups pay big financial fees and non-monetary compensations to government officials.  In recent years, gambling has helped push economic growth in the underworld of the Philippines capital, Manila where Chinese flock from China where gambling is outlawed.

“Sex slavery in Manila has grown three times more than gambling in Manila,” says Michele Francis of The RINJ Foundation’s nursing unit, The Nurses Without Borders.

“At the same time HIV and HBV now permeate 20% of the young adult community in Manila,” she added, “and no child is safe from being lured into the child sex trade. It is a nightmare,” she added.

“No help will come from the Philippines administration which leader has oovertly encouraged rape of women and children in the Philippines, says Katie Alsop, a global director of The RINJ Foundation.

Another lawyer, Christian Monsod, commented recently on the sweep across the Philippines of people who allegedly called President Rodrigo Duterte, ‘crazy’
as being “both illegal and unconstitutional”.

“This comment is about as relevant as a fly spitting in the midst of a typhoon,” said the Davao lawyer when asked about recent developments involving a sweep across Facebook, arresting people who wrote things the staff at Duterte’s Malacañang Palace did not like.

Monsod, who seems to be more interested in Duterte’s rights pointed out Friday that the arrest of a 41-year-old salesman from Agusan del Norte over a Facebook post  criticizing President Duterte and long-time aide Senator Bong Go has “no basis since there was no warrant of arrest, and the parties maligned have yet to file a complaint”.

But Duterte has already issued a warning. He said “kill them dead” referring to people who became outspoken about the military knockdown of some 55 million Filipinos on Luzon island, Duterte’s military response to the global pandemic.

Warning. Police Shoot man in the back for Quarantine violation. No mask. 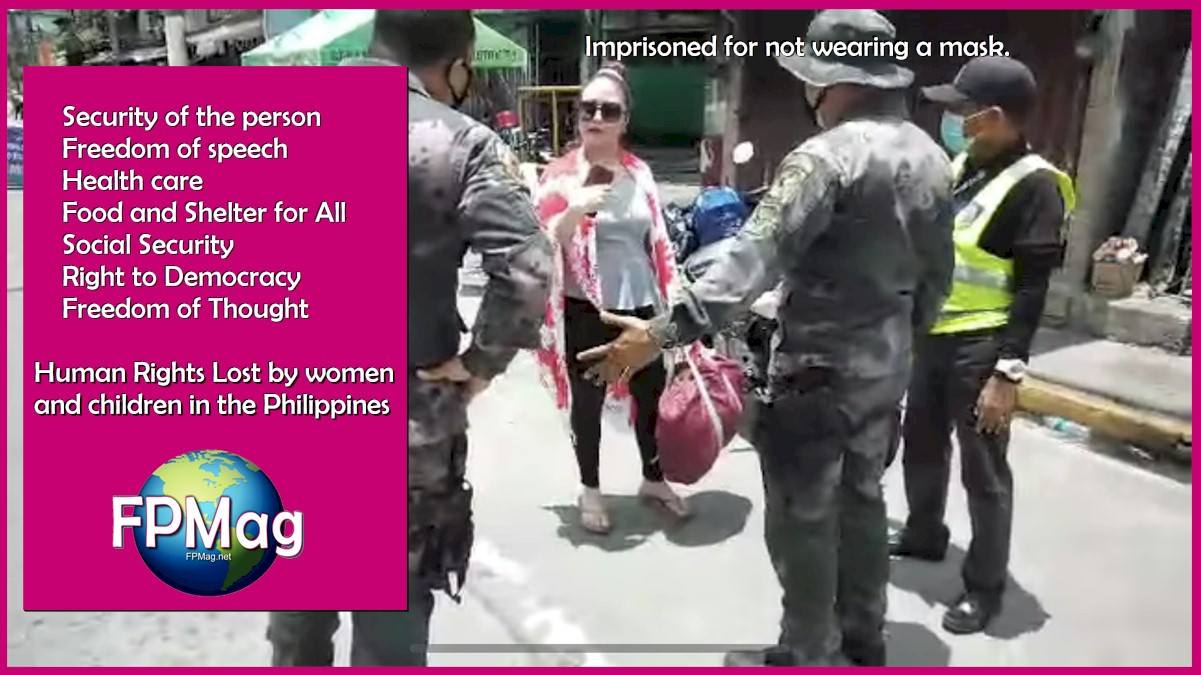 Source: Facebook
Human Rights Lost by women and children in the Philippines

“Filipinos have no recourse against a rogue government that has turned against the people. International institutions are dead in the water. Human rights activists can only complain and get killed,” says frustrated lawyer.

What should FPMag tell readers?

“If you are Filipino,” says the lawyer, “get off Facebook. Facebook and Duterte’s people are tracking you all over the world. OFWs are scr*wed. Local Filipinos are scr*wed, and after saying this, I am leaving here to stay with family in the middle of nowhere.”