Canada heartbroken. Lost is a beloved sister who served her country in uniform.

“She was working to brighten Canadian faces amidst a fight with the nastiest most hateful and ferocious ugly beast Canada has ever battled since the scumbag ISIS in Iraq and the sick-Nazis in WWII,” is exactly what my editor said, when I proudly accepted this assignment. Let’s all us Canadians stand tall, strong, proud and together for a lost sister, with fist to heart.

The Snowbirds and Capt. Jenn Casey were about to salute those Canadians doing their part to fight the spread of COVID-19, as weather was beginning to improve on Sunday, 17 May.

Capt. Jennifer Casey of Halifax, Nova Scotia died Sunday, 17 May while conducting an emergency ejection from aboard a venerable (60 years old) Canadair CT-114 departing Kamloops, BC airport as the public information officer for the Canadian military’s air demonstration team known as ‘The Snowbirds‘.

The cheerful officer will be sadly missed by hundreds of thousands of Canadians who have seen her face before, whether they realize it or not. Before joining the Snowbirds team Jennifer Casey was the face of a CF-18 air demonstration team on the air show circuit in North america. 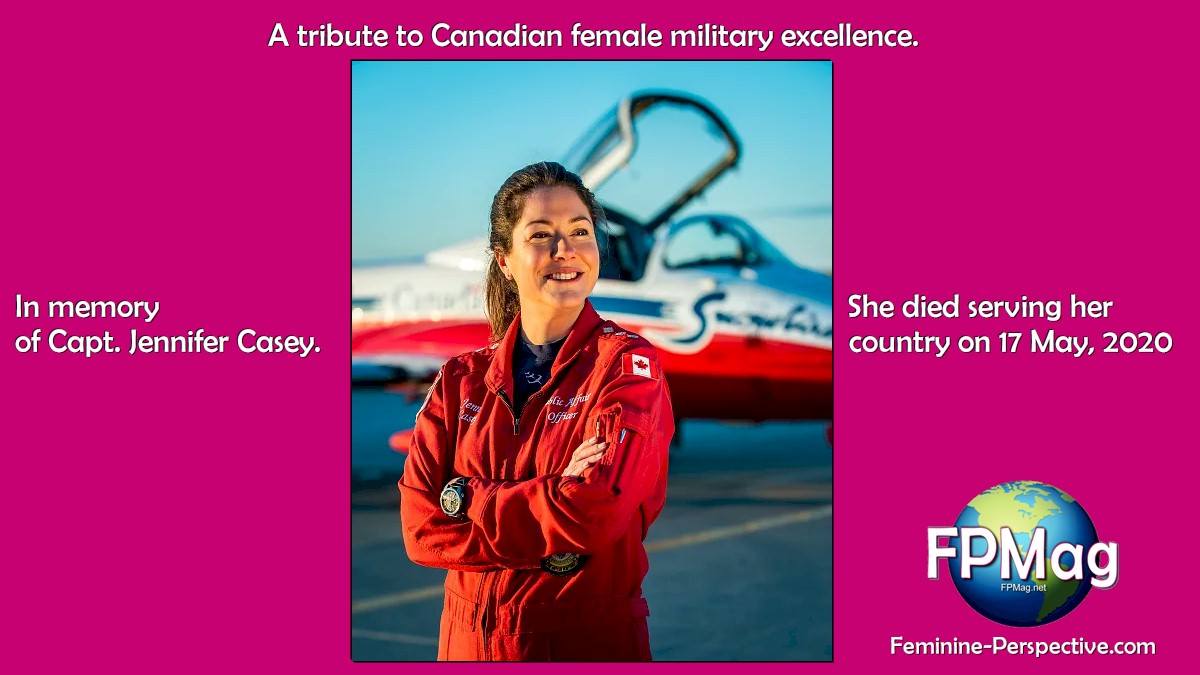 The cheerful officer will be sadly missed by hundreds of thousands of Canadians who have seen her face before, whether they realize it or not. Before joining the Snowbirds team Jennifer Casey was the face of a CF-18 air demonstration team on the air show circuit in North America. File Photo: Photo Art/Cropping/Enhancement: Rosa Yamamoto FPMag

Heartbreaking. Snowbird who died has been identified as Captain Jennifer Casey. Before she was the Public Affairs Officer for the Snowbirds, she was a reporter/anchor/producer at @NEWS1130 sister station @NEWS957 in Halifax. https://t.co/Ukdl6sJcQZ 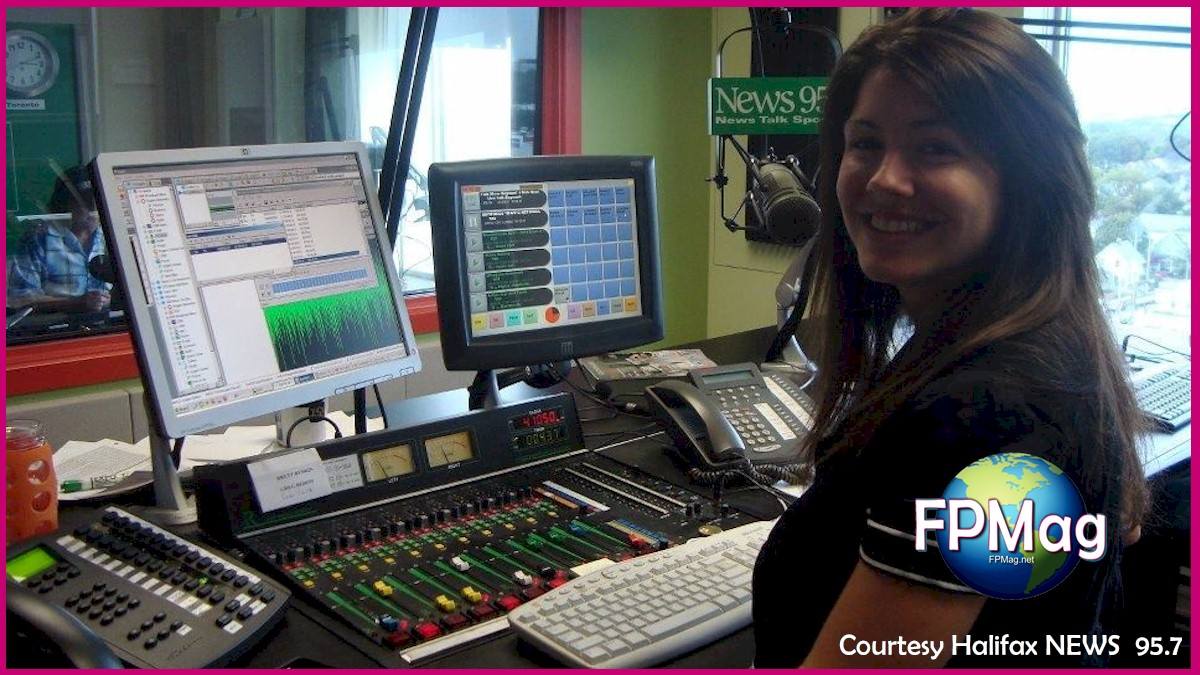 Jenn Casey killed in a  plane crash 17 May, 2020 in the Brocklehurst neighbourhood of Kamloops BC, bordered by the Thompson River and the airport, leaving one house in flames and a large field of debris. Photo courtesy “Halifax News 95.7”

It is with heavy hearts that we announce that one member of the CF Snowbirds team has died and one has sustained serious injuries. We can confirm that we have contacted all primary family members of those involved. More information will be communicated in the near future.

The current mission of which the 17 May flight was an element, was part of a “feel-good” spirit-lifting effort of the Canadian Government during a nation-wide lock down to restrict the spread of a global CoV pandemic.

FPMag had criticized the militarization of the pandemic response which is a copy of the far more advanced American ‘Blue Angels” and Thunderbirds‘ effort in the USA flying relatively first-line aircraft.

“The Snowbirds CT-114 trainer aircraft have been falling out of the sky for decades. All trainers and air-demo aircraft have a tough job. None fare better than the CT-114. It remains in service because of its extraordinary safety record and its suitability to the mission. Air demonstration team flying, whether civilian or military, is extremely hazardous by comparison to regular aviation. It’s a regime that produces some of the best input for aircraft engineers and designers, after test-piloting,” wrote our editor a decade ago.  Micheal, has flown the CT-114 as pilot. He  is a 10,000+ hour fixed-wing and rotary-wing licensed commercial pilot plus former writer for Canadian Aviation Magazine and for Aerospace Canada Magazine.

Of the air-demonstration (now 431 Squadron) team’s history of 17 casualties thus far, there have been only 9 deaths in 60 years, including the fatal injury of Jennifer Casey who was killed in action on Sunday, according to historical documents including Wikipedia.

The outcome of Jennifer Casey’s pilot Captain Richard MacDougall who survived the crash but sustained serious, non-life-threatening injuries, is yet to be determined.

“We can only pray and wish for the very best possible outcome per his and his family’s wishes,” suggests nurse Michele Frances, a regular FPMag medical contributor.

“Under the circumstances, his spirits will be blue and pharmacology is a likely course for avoiding some interim emotional shock indications like intrusive memories, flashbacks, and for now, most importantly, averting physiological reactions to anything that serves as a reminder of the terrifying experience that could disrupt immediate healing,” added the concerned front-line caregiver.

In April 2018 it was revealed that the Canadian Department of Defence would again patch up the Snowbird CT-114 aircraft operated only by the air demonstration team. The geriatric birds would receive modernized radios and navigation electronics (avionics) to comply with current-day minimum regulations.

The CT-114 2-seat trainers have been in service since 1960 and were designed and built in Quebec, Canada. Minor upgrading work is apparently to begin in 2022. New avionics will permit the team to continue flying legally in North America and allow the Tutors to fly until the year 2030 when a replacement aircraft is to be put into service. According to sources, the Government of Canada intends to replace the CT-114 with new aircraft between 2026 and 2035, with a first cost estimate ranging from $500 million to $1.5 billion Canadian Dollars.

According to the Canadian Armed Forces, Jenn Casey’s, “first assignment as a Public Affairs Officer was at 8 Wing Trenton, the Royal Canadian Air Force’s home of air mobility. She spent the 2018 season with the CF-18 Demo Team, travelling North America and the United Kingdom with the NORAD 60 jet. Captain Casey joined the Canadian Forces Snowbirds in November 2018.”

According to her LinkedIn Profile:

Around the world, Feminine-Perspective Magazine staffers and contributors extend hands and hearts to reach out to family, friends, colleagues and all Canadians.

Jenn Casy, rest in peace. Gone but never to be forgotten.

The article " Canada heartbroken. Lost is a beloved sister who served her country in uniform. " was written by Author: Melissa Hemingway (Biography, Email) Senior Staff Writer and Associate Editor at Large
Contact Melissa Hemingway on Twitter ~ Facebook ~ Find on YouTube