The public explanation for the ‘Burqa-Ban‘ is sometimes security which then breeds racism because the excuse implies that Muslims are dangerous. Behind that is appeasement to one or another Islamophobic racist groups; and an abysmal abdication of intelligence.

The latest misogynist patriarch to go active runs Sri Lanka and now says it will stop Muslim women from covering their faces to “protect the public”.

The apparently incompetent Sri Lankan government was repeatedly warned in advance of a complex array of attacks on 21 April which murdered an unknown number of people believed to be in the hundreds. Unofficial sources say the warnings were explicit about the probability of terrorist attacks against Catholic icons.

A three-page document, dated April 11, translated by the New York Times, warned of a “possible suicide attack being planned in this country by Mohammed Zaharan, leader of the National Thawhith Jamaan”.

“You should instruct all personnel to pay strict heed to this report and be extra vigilant and cautious of the top officials and residences coming under your purview,” the document said.

It is just as unacceptable in Sri Lanka as in Quebec, a part of Canada which is predominantly Catholic. Quebec banned the wearing of Arabic garb in government places because it believes Arabic garb is a symbol of a religion it chooses not to like nor support. It certainly supports Catholic schools and other institutions all over the province. But Quebec’s government does not like Islam. Fortunately Canada has many other wonderful provinces in which any Canadian may got to and live without fearing religious persecution.

Catholics stopped wearing the head covering veils in 1963 following the Second Ecumenical Council of the Vatican which modernized (by 60’s standards) the Catholic Church, hence this misogynistic and racist discrimination against Arabian wear only impacts Muslims. Keep in mind the Catholic ritualistic changes were made around the time of publication of the nonfiction book by white journalist John Howard Griffin who dyed his skin black, recounting his journey in the Deep South of the United States, at a time less than 15 years after the Universal Declaration of Human Rights came into being when African-Americans lived under horrid racial segregation. The mindset of that era did not favour human rights. The Catholic Church was beginning to see the light of Human Rights. Islam should take note. 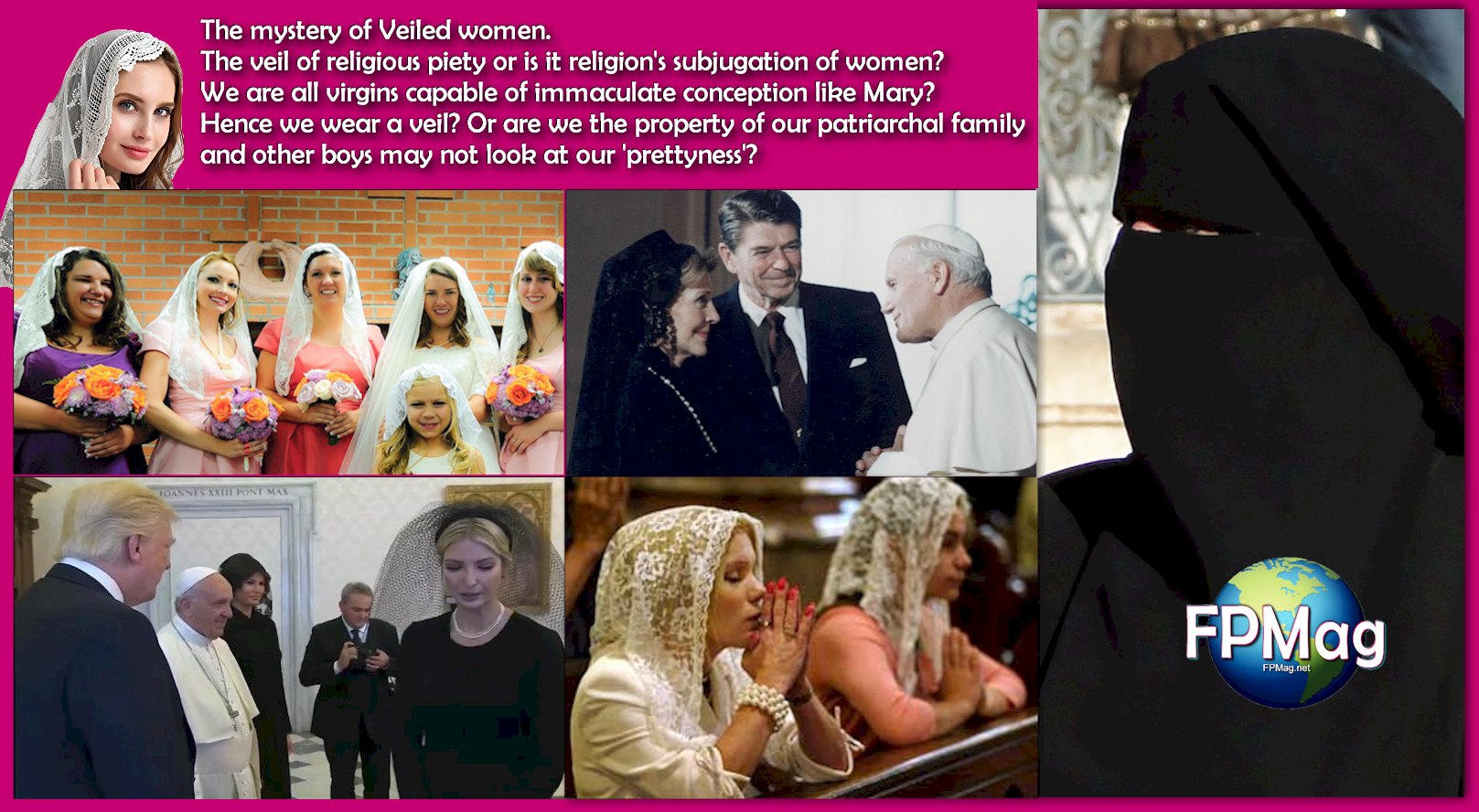 The mystery of Veiled women.

We are all virgins capable of immaculate conception like Mary? She was no virgin but a woman who became pregnant outside of marriage. That brought on the death penalty in those barbaric times (are these times much better?) An older, gentle man named Joseph stepped up and married her quickly. She had a baby named Jesus whom the Jews thought may have been a good teacher. It got much more complicated from there.

Medical science and history itself says Mary was no virgin but the Catholic church since about 500 AD claims she was a virgin. It’s a heap of misogyny so bad that an absolute lie must be told. Whose business would this be? Why would a benevolent Vatican make up such a thing? It is not so benevolent toward women?

Hence we wear a veil? Or are we the property of our patriarchal family and other boys may not look at our ‘prettyness’?

Note: In some of these countries the garment ban is in autonomous regions only where the national government has only influence but no jurisdiction. Be careful how you aim your wrath at the members of this racist misogyny club. 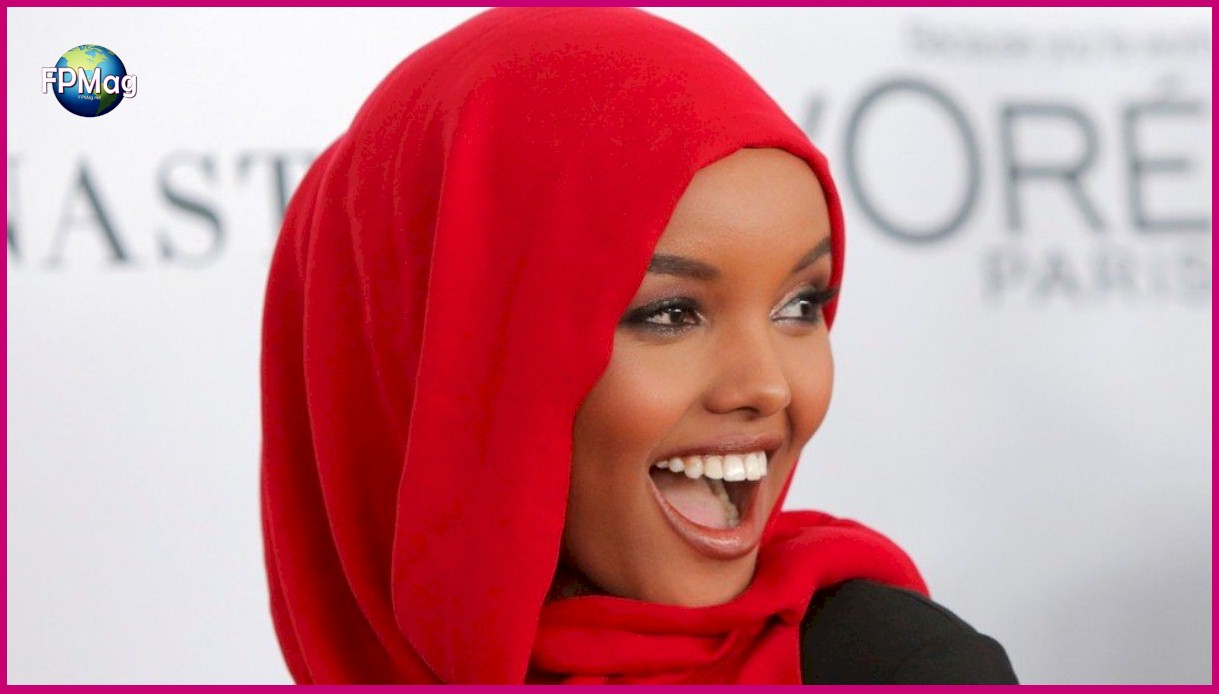 Not Banning the Burqa, Halima Aden is with a ‘burkini’ in a US Swim Suit Magazine.
Photo Credit:Twitter 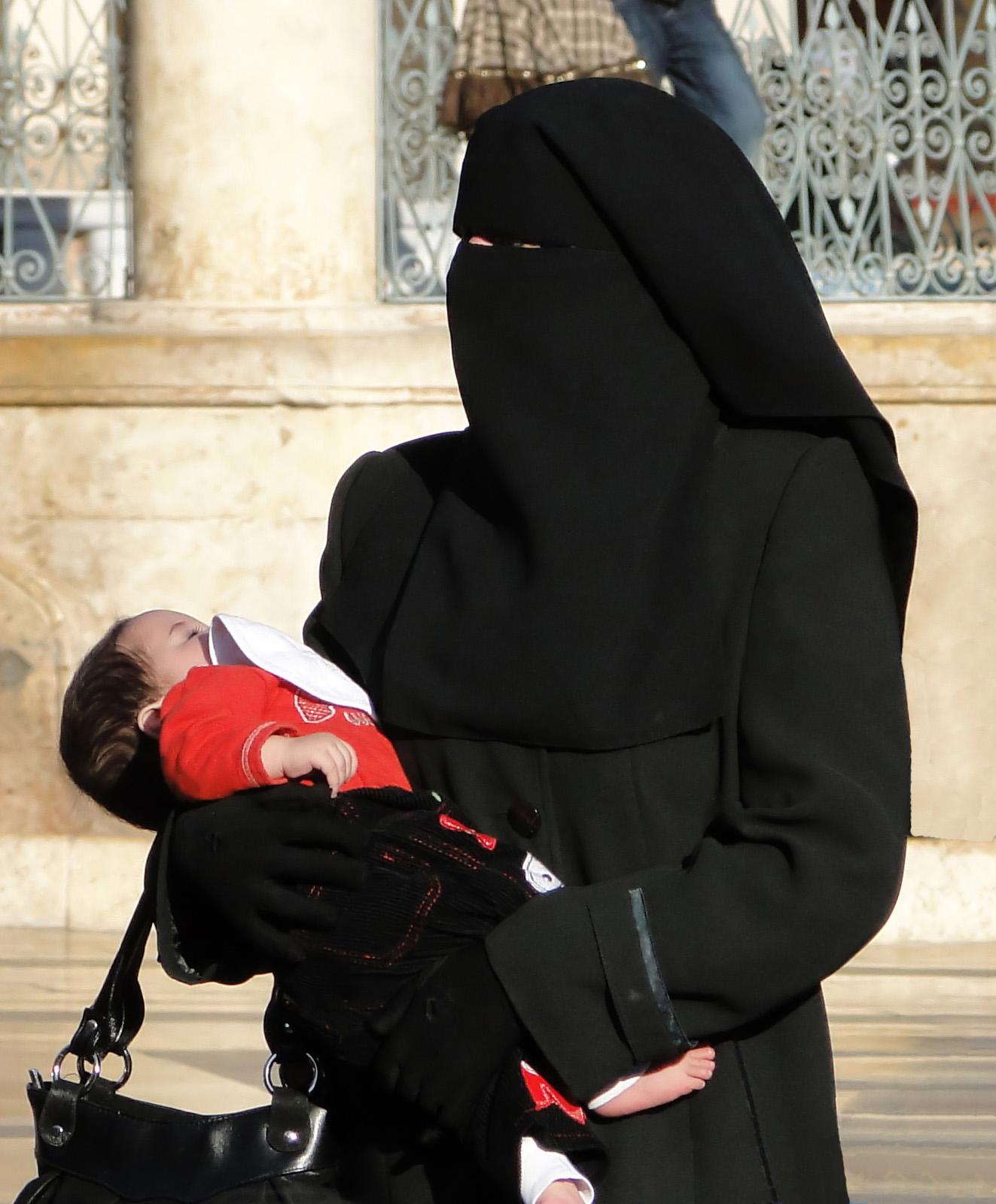 Niqāb by choice worn by a woman in Aleppo, Syria in 2010. Photo by Bernard Gagnon

Limiting human rights is a very bad practice for government persons because they have accepted the highest position of trust and expectation to uphold the law and to respect the rights of all constituents.  Those that violate these tenets like the apparently incompetent government of Sri Lanka which is banning ‘looking like a Muslim‘ for lack of its own better description.

Muslim women do not need special clothing to practice their religion. The list of clothing for which mainstream media is feigning expertise is somewhat irrelevant to Islam.  Modest dress is what most of the words were intended to mean.

The Qran says people should dress modestly and avoid revealing any parts of their bodies, except that which is necessary. In Canada and parts of Russia where temperatures hit -40, that’s a swell idea. Cover it or lose it. That can include your lips and your nose as well. Wearing a scarf in Edmonton during the winter is a very good plan. Don’t tell people they cannot cover their faces.

Governments of many misguided nations have put into law various edicts that tell people what they must wear and and they are not permitted to wear. Some say that they are telling populations not to wear a burqa because to wear one is submitting to oppression of women by Muslim men. Really?

Consequently these government men believe women must submit to their government’s oppression instead of another’s subjugation?

Laws made by governments should have Gender Parity and Equality 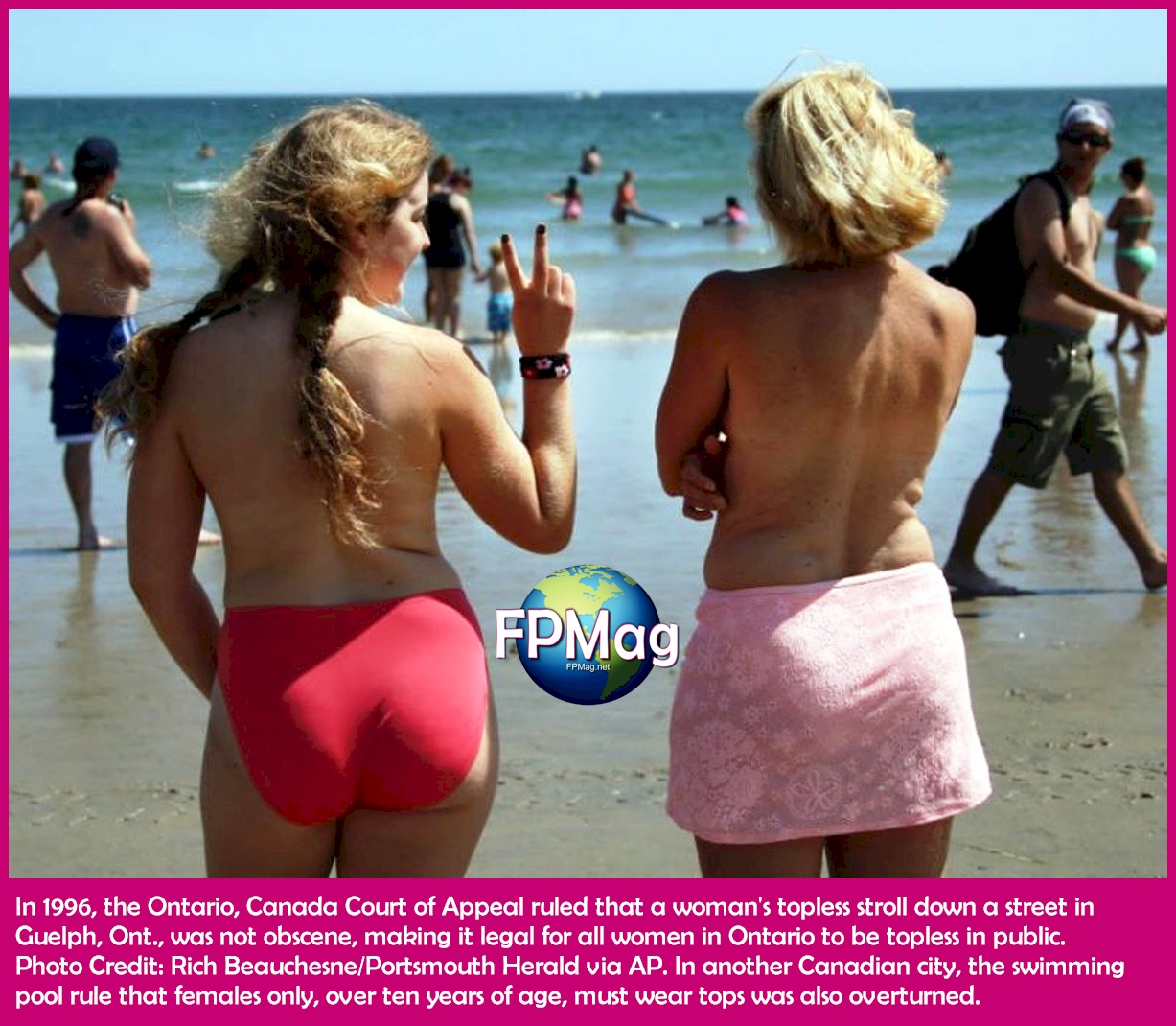 Laws must be gender equal. Choices are made by people on their own and of their own free will.
Photo Credit: Rich Beauchesne/Portsmouth Herald via AP.
Photo Art: Rosa Yamamoto FPMag

In 1996, the Ontario, Canada Court of Appeal ruled that a woman’s topless stroll down a street in Guelph, Ont., was not obscene, making it legal for all women in Ontario to be topless in public.

In another Canadian city, the swimming pool rule that females only, over ten years of age, must wear tops was also overturned. Generally there was no opposition to the human rights complaint seeking gender equality for males and females.

Typically in Canada, women do not walk around topless. There is little reason to be topless but yes, there are at rare times compelling reasons. Occasionally some women are topless. It’s a matter of choice for each person for their own reasons. There is nothing obscene about breasts. Ask any infant what they are for if you do not know.

Understanding the Fetish About Covering Up Women

Many religions have among their rituals and edicts some sensibilities that date back long ago and are based on crude logic and some wisdom.

Desmond Morris’ writings about human behaviour over 50 years ago have stood the test of time. He claims to be a zoologist but his fans claim him to be an existentialist social anthropologist of considerable excellence.

In any case, Desmond Morris once wrote about sexuality that men’s visual attraction to women is based on hips and breasts.

She must have wide hips to deliver a baby and ample breasts to feed the baby. These markers are genetically bred into males’ brains. They are coincidentally determinate of suitable age. Generally these post pubescent indicators are helpful in determine by sight if a female person is physically of reproductive age.

Normal men are zealously enthusiastic about these two factors, breasts and hips. Men who are ill and wired backwards find those features loathsome. They are usually pedophiles and that is a rare illness. That definition for example is why it is actually wrong to call Jeffrey Epstein a pedophile because he was convicted of sexing busty female models who were American child-aged and thus below the age of consent. That same age applies around much of the world but not everywhere.

This tells researchers that nature has its own intelligence built into the genes of humans.

The imposed covering of women is rooted in male domination or worse. Men covering up women is all about turning women into their chattel property, like their goat, horse or dog.

Women, covering up themselves modestly is a woman’s choice. Most women who are married with children cover up but not all. Without any particular reason, some women are dressing for comfort or convenience without thinking they may be noticed. This does not put them in any danger unless they walk into a hornet’s nest or fall down into a field of nettles. Neither is likely and the risk is gender-neutral.

Somebody once said, “single teen girls want attention and married women want respect”. It’s now a bumper sticker. Don’t base your learning on bumper stickers. Read good books. And be sure to read FPMag. Better yet, get the FPMag App. – Melissa Hemingway

Sexual harassment, sexual assault or rape are crimes done by men who seek power and control over someone they believe is weaker then they are themselves, and who are also willing to commit a serious criminal act with criminal intent. These crimes are not based on on how she looks but are based on a desire for power. Covering up a woman does not prevent these crimes.

The burqa likely first appeared popularly around the tenth century in Persia. But the niqāb predates Islam by a very long period of time. It is an Arabian custom of garb.

In recent times onerous dictatorships like that of Saudi Arabia and the Taliban in Afghanistan compelled women to wear these garments. That’s as wrong as legislating that women may not wear what they wish to wear. But there is no legislating with these men. They are dictators who make laws on a whim. They are renown for publicly beating women.

“Banning Burqa” is as bad as “Imposing Burqa”

That truly is all about oppression and subjugation of Muslim women. It’s a violation of human rights that is no different than the American edicts banning the reproductive medical care for women around the world.

But many women came to like wearing a scarf or even full body covering. It’s very handy if you don’t feel like doing your hair and face just to run out and get some fabric softener you just realized you don’t have. Honestly. Or those few extra pounds from the last holiday season celebration.

Telling people what clothing they may and may not wear in public is generally a violation of the Universal Declaration of Human Rights.

That includes millions of people who live on the Arabian peninsula, some of whom commonly choose to wear a niqāb.

In many places the niqāb is seen as encroaching on fundamentalism. Regardless, on the Arabian Peninsula it is commonplace. Those people when traveling will be seen wearing their niqāb. Get over it.