Solidarity: Russia’s medical help to Italians is of haute qualité.

Italy has been hit hard by the novel coronavirus pandemic. Watching the numbers climb daily has been a heartbreak to the world.

While Italy has addressed the crisis with its very human response despite being faced with horrible medical supplies shortages, at one point, medical practitioners healthy enough to continue working feared they would soon be making decisions about who they could treat and who they would necessarily let die. That’s how bad things have been going. Some 5,000 health workers have fallen prey to the infernal COVID-19.

“This is a very difficult situation,” Italian doctors have been saying to anyone who will listen.

Then came China with abundant assistance and a team of medical experts.

Next, “From Russia with Love” which like the China response was beautiful to see. “Human solidarity is a beautiful thing,” says Michele Francis, who runs a nurse-led clinic in the Amazon Basin of Venezuela and doubles as a healthcare consultant to FPMag.

“Vladimir Putin seems to be gifted with a quick and natural inclination for redemption. Clearly the man has a heart. He didn’t just step up, he leapt forward with an army to help his Italian partners,” says FPMag‘s health care consultant. 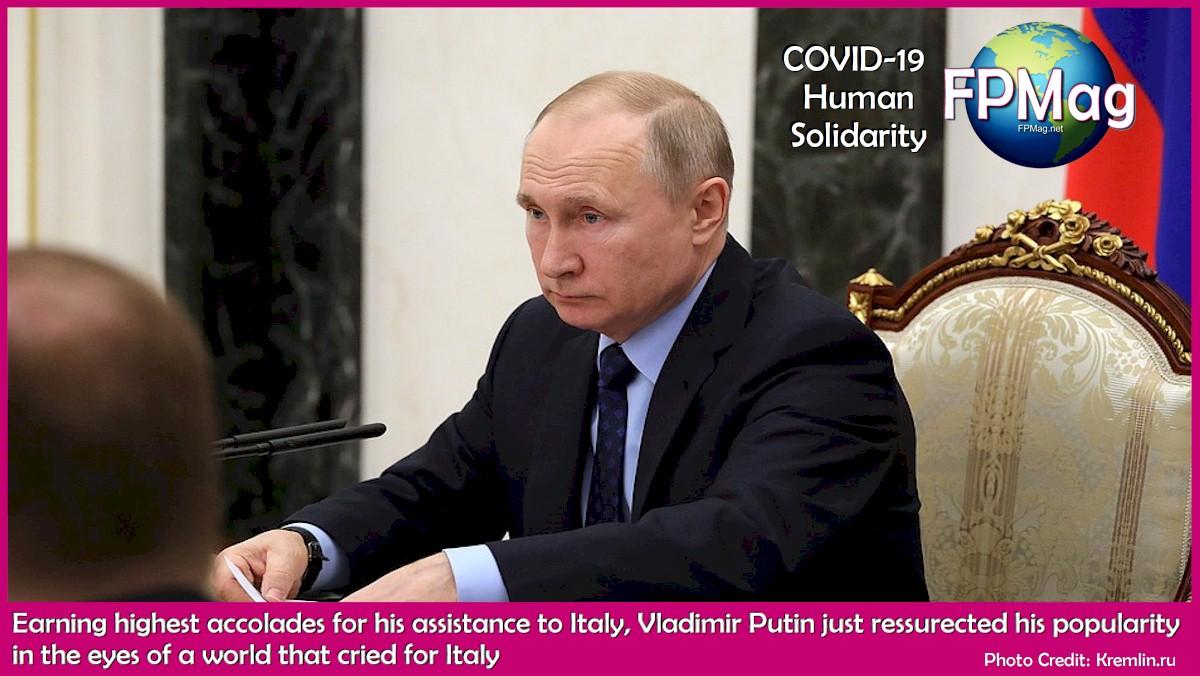 Earning highest accolades for his assistance to Italy, Vladimir Putin just ressurected his popularity in the eyes of a world that cried for Italy. Photo Credit: Kremlin.ru. Photo Art/Cropping/Enhancement: Rosa Yamamoto FPMag

Earning highest accolades for his assistance to Italy, Vladimir Putin won the hearts and minds of a world that was losing hope.

The first of nine enormous IL76 cargo aircraft brought medical supplies, equipment and over 100 military medical specialists with experience fighting Ebola, to Rome. This writer has experience working with these teams and they are impressive.

The shipments began this past weekend and Italy’s Prime Minister Giuseppe Conte was assured personally by Putin that there were, “no strings attached,” From Russia with Love.

It would have been hard not to smile for anyone in attendance, “the world loves Italy and a billion eyes have assuredly cried for the grief its people have faced,” said Marilena DiMatteo, a strong member of the Toronto Canada Italian community.

“Giuseppe Conte expressed his sincere gratitude for the steps Russia is taking to support Italy at such a tough time for it,” the Kremlin said.

FPMag contacted several Italians in Canada and in Italy and the most succinct description of the reaction would be, “emotionally-expressed gratitude and a few tears”.

From Russia With Love

Likely this time of need is unprecedented. Human solidarity is exactly what is needed at this time of global crisis.