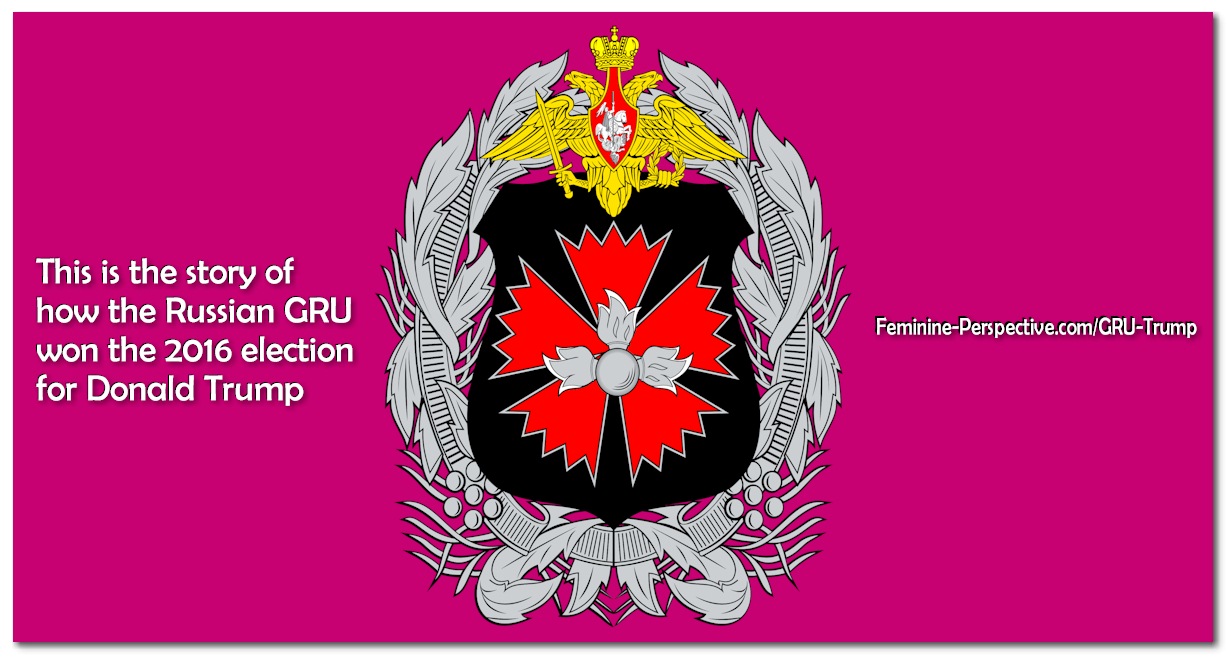 This is the story of how the Russian GRU won the 2016 election for Donald Trump.
Art: Rosa Yamamoto, FPMag

Putting Trump in the White House has been good for Russia. One must credit Vladimir Putin as truly the leader of the world when considering the sheer power he exerts. Three days ago he militarily invaded Venezuela with a hundred or so troops as a follow-on to many hundreds of Russian mercenaries and ‘sleeper cells’ hiding in the boondocks of the Amazon Basin of that country.

Why Putin Wanted Trump? Seizing a country can take a day or two if nobody stands in the way.

On 4 June of 2014, the Islamic State invaded Mosul, Iraq. We watched a few Toyota Hilux trucks scoot along Nineveh Street on the Right Coast. By 14 June 2014 it took less than 100 mixed foreign fighters and local ISIS fighters to seize the city. It’s not as if the skies turn black with parachutes as Hollywood tends to project.

Trump’s America left Venezuela abruptly on 12 March, leaving the gate open, pulling out its embassy lock, stock and barrel. Within two weeks, Russia had hundreds of regular troops and mercenaries on the ground in Caracas as an AN-124 began cargo missions on Saturday. Read if you wish -> Game changer in Venezuela: Russian Military Forces Arrive

The U.S. will withdraw all remaining personnel from @usembassyve this week. This decision reflects the deteriorating situation in #Venezuela as well as the conclusion that the presence of U.S. diplomatic staff at the embassy has become a constraint on U.S. policy. 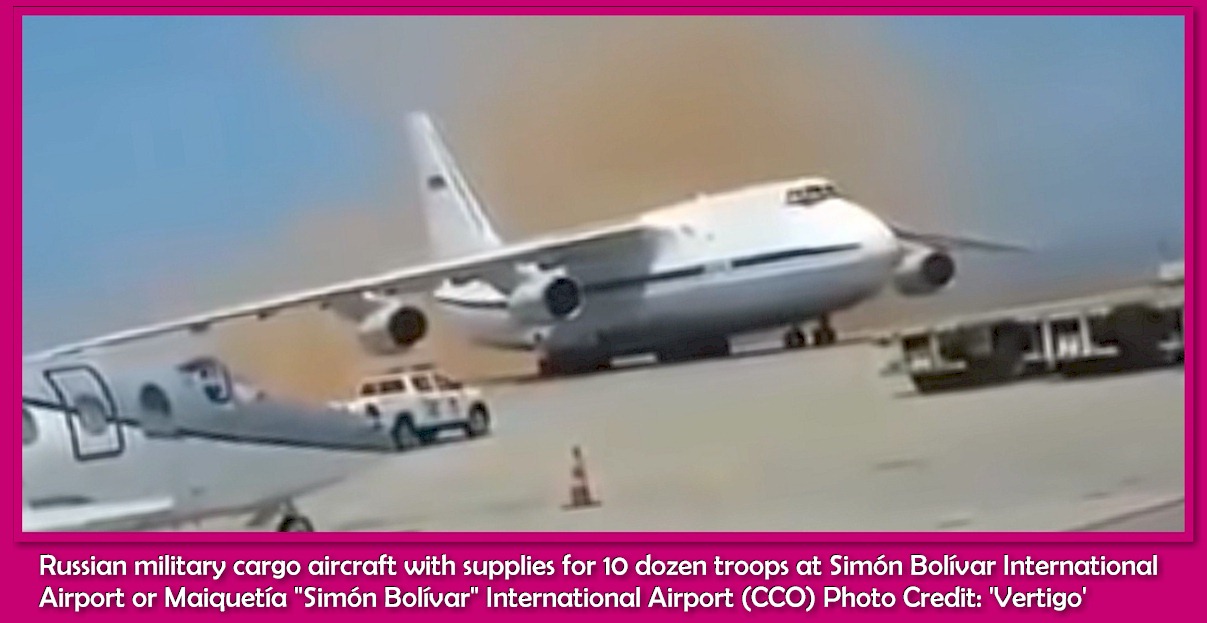 But this is not a story about why Putin wanted Trump in the White House, it’s about how Vladimir Putin put Trump in the white House.

The Social Media Blitz from Russia with Love for Donald Trump

Some of the Allegations of Acts Targeting the 2016 U.S. Presidential Election

In order to collect electioneering intelligence, the accused and their co-conspirators posed as U.S. persons and contacted U.S. political and social activists.

For example, starting in or around June 2016, the accused and their co-conspirators, posing online as U.S. persons, communicated with a real U.S. person affiliated with a Texas-based grassroots organization.

During the exchange, the accused learned from the real U.S. person that they should focus their activities on “purple states like Colorado, Virginia & Florida.”

After that exchange, the accused commonly referred to targeting “purple states” in directing their efforts.

Through fraud and deceit, the accused created hundreds of realistic social media accounts and used them to develop certain fictitious U.S. personas into “leader[s] of public opinion” in the United States.

Employees of the accused corporate entity, referred to as “specialists,” were tasked to create social media accounts that appeared to be operated by U.S. persons. The specialists were divided into day-shift and night-shift hours and instructed to make posts in accordance with the appropriate U.S. time zone.

The accused corporate entity also circulated lists of U.S. holidays so that specialists could develop and post appropriate account activity.

Specialists were instructed to write about topics germane to the United States such as U.S. foreign policy and U.S. economic issues. Specialists were directed to create “political intensity through supporting radical groups, users dissatisfied with social and economic situations and opposition social movements.”

By 2016, the size of many accused-controlled groups had grown to hundreds of thousands of online followers.

Starting at least in 2015, the accused and their co-conspirators began to purchase advertisements on online social media sites to promote their controlled social media groups.

To conceal its involvement, the accused labeled the monies paid for Project Lakhta as payments related to software support and development.

Here is a period example of advertising that began in 2015. This example schedule is the 8 months prior to Election 2016

To measure the impact of their online social media operations, the accused corporate entity and co-conspirators tracked the performance of content they posted over social media. They tracked the size of the online U.S. audiences reached through posts, different types of engagement with the posts (such as likes, comments, and re-posts), changes in audience size, and other metrics. Defendants and their co-conspirators received and maintained metrics reports on certain group pages and individualized posts.

The accused regularly evaluated the content posted by specialists (sometimes referred to as “content analysis”) to ensure they appeared authentic—as if operated by U.S. persons. Specialists received feedback and directions to improve the quality of their posts.

Specialists issued or received guidance on: ratios of text, graphics, and video to use in posts; the number of accounts to operate; and the role of each account (for example, differentiating a main account from which to post information and auxiliary accounts to promote a main account through links and reposts).

Use of U.S. Computer Infrastructure

To hide their Russian identities and affiliation top the accused corporate entity affiliation, the accused and their co-conspirators—particularly Polozov and the IT department—purchased space on computer servers located inside the United States in order to set up virtual private networks (“VPNs”). Defendants and their co-conspirators connected from Russia to the U.S. based infrastructure by way of these VPNs and conducted activity inside the United States— including accessing online social media accounts, opening new accounts, and communicating with real U.S. persons—while masking the Russian origin and control of the activity.

The accused and their co-conspirators also registered and controlled hundreds of web-based email accounts hosted by U.S. email providers under false names so as to appear to be U.S. persons and groups. From these accounts, Defendants and their co-conspirators registered or linked to online social media accounts in order to monitor them; posed as U.S. persons when requesting assistance from real U.S. persons; contacted media outlets in order to promote activities inside the United States; and conducted other operations.

Use of Stolen U.S. Identities

In or around 2016, the accused and their co-conspirators also used, possessed, and transferred, without lawful authority, the social security numbers and dates of birth of real U.S. persons without those persons’ knowledge or consent. Using these means of identification, the accused and their co-conspirators opened accounts at PayPal, a digital payment service provider; created false means of identification, including fake driver’s licenses; and posted on accused corporate entity-controlled social media accounts using the identities of these U.S. victims. Defendants and their co-conspirators also obtained, and attempted to obtain, false identification documents to use as proof of identity in connection with maintaining accounts and purchasing advertisements on social media sites. 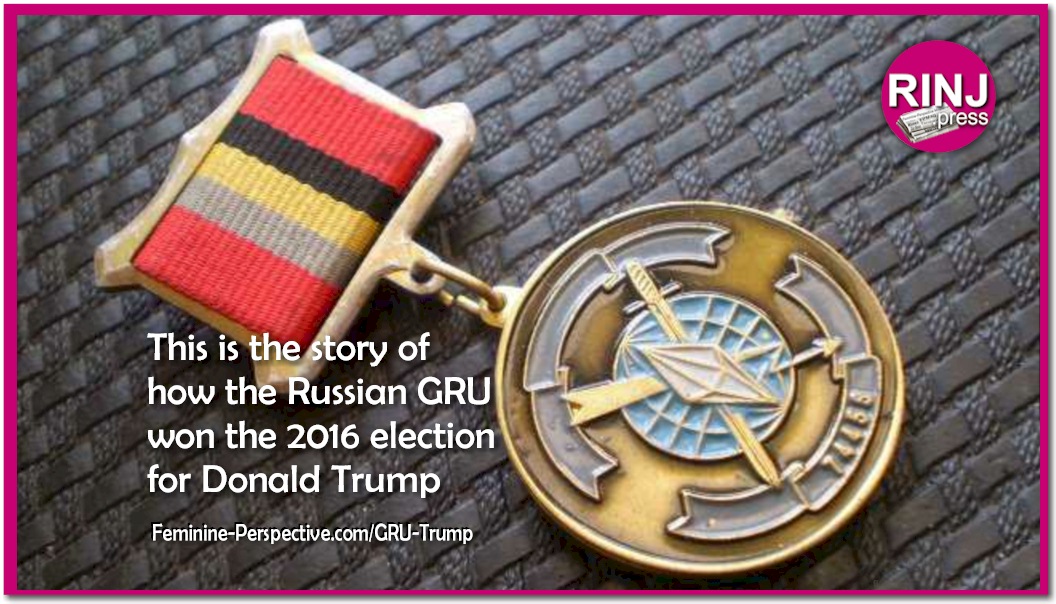 This is the story of how the Russian GRU Units 26165 and 74455, engaged in cyber operations to win the 2016 election for Donald Trump

The Russian Federation (“Russia”) operates a military intelligence agency called the Main Intelligence Directorate of the General Staff (“GRU”). The GRU had multiple units, including Units 26165 and 74455, engaged in cyber operations that involved the staged releases of documents stolen through computer intrusions.

These units conducted large-scale cyber operations to interfere with the 2016 U.S. presidential election.

The following persons are accused of crimes against the United States. They are each operators and officers within the GRU and as such have been indicted by a US Grand Jury.

The over riding object of the mission these Russian spies were conducting was to hack into protected American computers and servers of persons and entities charged with the administration of the 2016 U.S. elections in order to access those computers and steal voter data and other information stored on those computers.

1. These GRU officers knowingly and intentionally conspired with each other, and with persons known and unknown to the Grand Jury (collectively the “Conspirators”), to:

4. The spies covertly monitored the computers of dozens of DCCC and DNC employees, implanted hundreds of files containing malicious computer code (“malware”), and stole emails and other documents from the DCCC and DNC.

5. By April 2016, the Russian spies began to plan the release of materials stolen from the Clinton Campaign, DCCC, and DNC.

6. Beginning June 2016, the Russian spies staged and released tens of thousands of the stolen emails and documents. They did so using fictitious online personas, including “DCLeaks” and “Guccifer 2.0.”

7. The Russian spies  also used the Guccifer 2.0 persona to release additional stolen documents through a website maintained by an organization that had previously posted documents stolen from U.S. persons, entities, and the U.S. government. The Conspirators continued their U.S. election-interference operations through in or around November 2016.

8. To hide their connections to Russia and the Russian government, the Russian spies used false identities and made false statements about their identities. To further avoid detection, the Conspirators used a network of computers located across the world, including in the United States, and paid for this infrastructure using crypto currency.