Emergency Message to UNSC: You have no right to commit Genocide. [Editorial] 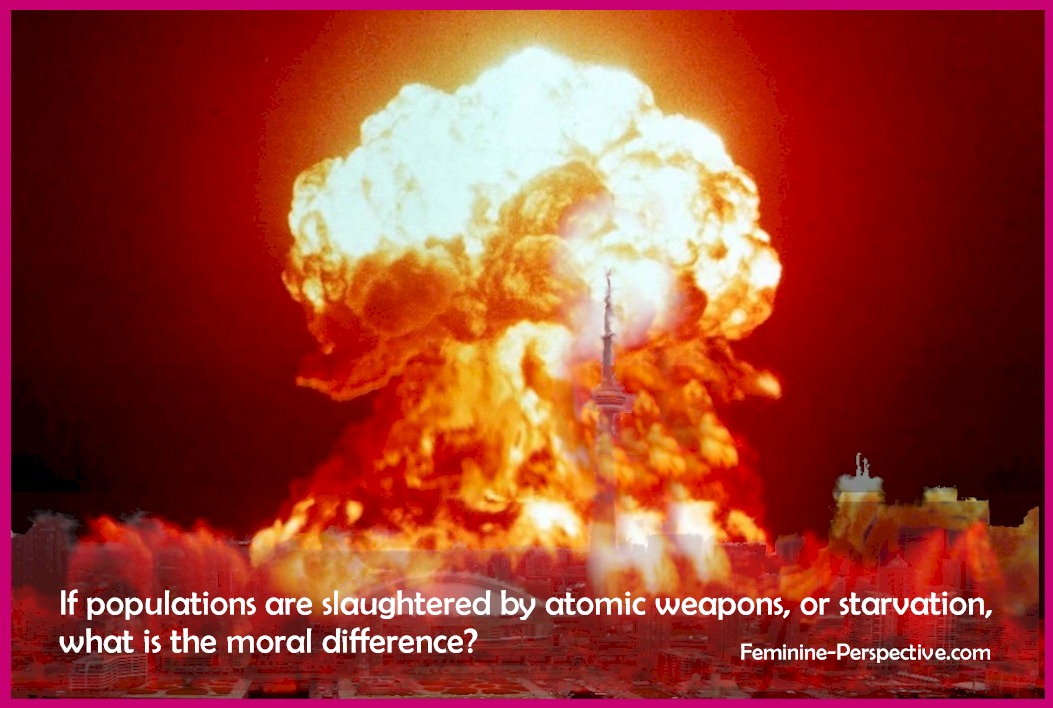 If populations are slaughtered by atomic weapons, or starvation,
what is the moral difference?
Photo Art  of  Rosa Yamamoto – Feminine-Perspective Magazine

Trump’s back-alley-thug games at the ‘Hanoi Summit’ ignored Chairman Kim Jong-un’s plea for help. Trump has no capacity for empathy and should have been removed from office long ago if there is to be any belief that America as a nation has any empathy or conscience left. Is America sick or is it Trump? It matters not.

Trump cost the world a chance to undo a wrong: the mistreatment of North Korea (DPRK) since 1953 and the in-progress genocide being committed against that country’s people. The sad part is that they are beautiful people as are their family in the South of the peninsula.

The United Nations has little capacity to stand up to Donald Trump, but it did recently allow five humanitarian aid groups to go to the DPRK and bring supplies, including MSF (Doctors without Borders). Hence the UN knows how serious has become this UN-created crisis.

Committing genocide against the people of the DPRK is completely unacceptable, but that is what is happening, willfully done by the UN despite years of warnings by Civil Society.

The conduct of the United Nations Security Council is inexcusable.

Somebody needs to speak this truth. The UN has been hijacked by a single country which last week declared publicly it can commit any crimes against humanity with impunity in an attack on the International Criminal Court. Wake the heck up.

How the collective United Nations has allowed itself to be exploited is reprehensible. How can this body prosecute genocide when it is doing exactly that. This is pure madness and a complete abdication of mandate by the United Nations plus a betrayal against the people of Earth. How it came to that matters less than how it shall repair itself.

The melancholy that permeates all of the Korean peninsula is a heart-breaker. Koreans know what is happening. Their Northern family is dying.

Our fingers of hope are pointed at Messrs: Putin and Jinping at the least. Europe also needs to step up because undoubtedly it can. Who is going to take a leadership role?

This crisis, no matter who anyone thinks is to blame, needs the help of all real humans. The only thing to be carried forward from the mistakes of the past are the resolve to not make them again.

Who will lead the solution to this humanitarian crisis?

Why is the UN Secretary General not in the DPRK?

Because of Yemen, South Sudan, Syria, the tropical cyclone rampaging south-eastern Africa and global apathy?  We get it. Leadership of UN-member states need to step up and assume some global leadership. There is currently a terrific void. Who will fill that void?

Genocidal economic sanctions against the DPRKmust be removed and enormous quantities of food and medicine must be delivered to the people of that country within hours and days. It’s that bad a situation. Environmental disaster and starvation from economic sanctions are killing the DPRK. Who in this global patriarch has the b**** to step up and take a leadership role?

The deliberate killing of a population is genocide and that is what the world through the United Nations Security Council is guilty of doing. This must be fixed fast.

This is not about Nuclear Weapons but about people trying to survive.

This is not about nuclear weapons, it is about the DPRK‘s desperate moves toward survival. Desperate people do desperate things. Was it wise to do this genocide attempt? No. The outcome is irreversible but the damage can be mitigated to a large extent.

Nothing will save the children who have been permanently impaired by malnutrition and lack of imported medicines.

How Could North Korea not be a Nuclear Nation?

Some members of the United Nations Security Council say that madmen should not have nuclear weapons, and yet as a group, and thousands of psychiatrists agree, you are pretty much controlled by one that by far controls the most nuclear weapons.

The article " Emergency Message to UNSC: You have no right to commit Genocide. [Editorial] " was written by Author: Micheal John (Biography, Email) Editor in Chief and Publisher of FPMag.
Contact Micheal John on Twitter ~ Facebook ~ LinkedIn ~ Instagram ~ Find on Wikipedia ~ Find on YouTube