CNN is reporting that, “US President Donald Trump has threatened to slap tariffs on another $300 billion of Chinese exports to the United States if China’s leader Xi Jinping doesn’t meet him at the G20 in Japan.”

Trump’s latest spectacle, a threat of more tariffs if the President of China doesn’t “buckle under” and come groveling to Donald Trump at the G20 conference, may not have a good result.

The consensus in Asia is that war is near. Trump may lose some of the ships now taunting the Chinese from inside the Taiwan Strait trying to provoke a war over Taiwan’s secession from China. Toying with Karma like that, Trump may  end up polishing President Jinping’s limo for the rest of his life. Or he may end up killing us all. 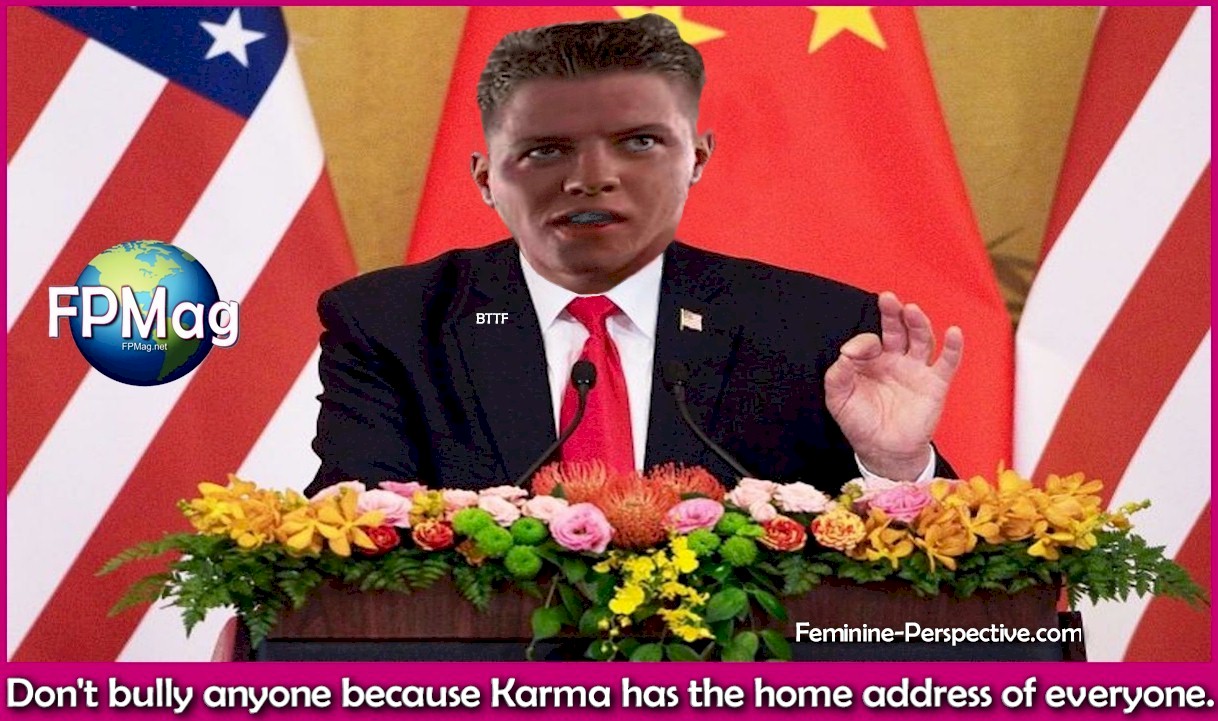 Someone should tell Trump, “Don’t bully anyone because Karma has the home address of everyone.”
Photo Art: Rosa Yamamoto FPMag

Iran, China, North Korea and Russia have been vigorously developing weapons with which to fight a war with the United States. Donald Trump has infuriated all of them and their allies. Now they are all befriending each other although Iran may be less tight with Russia as it hopes to borrow nukes from the DPRK in exchange for missile technology.

Trump may be running America the way he ran his businesses. Into the dumpster. 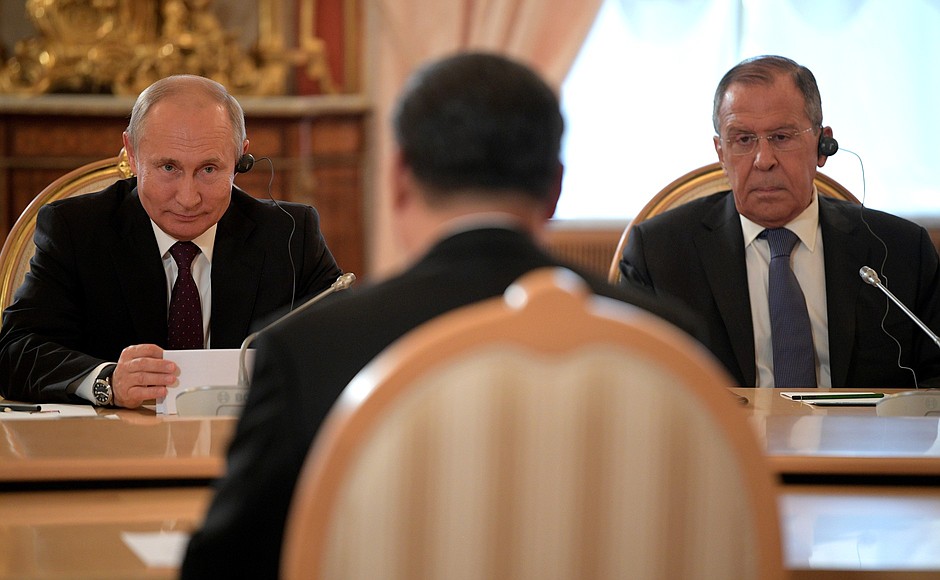 Xi Jinping with his back to the camera FACE-to-FACE with the President of the Russian Federation and the Foreign Minister of Russia. Extraordinarily in one photograph are the top three statesmen in the world–all three at the same table at the same time. 5 June 2019 – Xi Jinping visits Russia and Vladimir Putin. Photo Credit: Kremlin.ru

“Mianzi is a class of behaviors and customs in different countries and cultures, associated with the morality, honour, and authority of an individual. In China, Mianzi is as important as breathing.” — a Major in the People’s Army.

Trump’s epic rudeness and disrespect for the President of China not only has annoyed and even embarrassed most of Asia, but it has pushed two friends, Xi Jinping and Vladimir Putin even closer.

That is not a natural occurrence. The two countries, China and Russia have very little in common, prima facia.

Nevertheless, their economic and security relationships are about to expand.

Energy and security are good starting points. Add the super-high-tech 5G innovations from China integrated with Russian smarts through a cooperative deal that Huawei Technologies and the Russian Mobile Carrier MTS have signed independen from the political fray, and its not hard to see how this could expand into something the world will benefit from.

The sage advise of a seasoned master in Asian statesmanship is worth noting. Malaysia’s Prime Minister Tun Dr Mahathir Mohamad (94), says, “As much as (before) we expected everything from the West, now it is coming from the East,” he said during a dialogue session at the 25th International Conference on The Future of Asia (Nikkei Conference).

China produced better products and their research enables them to produce even better products. China spent much more money on research and development than probably Europe and the US, according to the Asian professor who has watched Asia as an adult for over 7 decades.

The American bullying of China and the Chinese people (i.e.: Meng Wanzhou) leaves too many Asian nations in an awkward position between two angry superpowers.  This pushes some to make a decision and choose sides. The proclivity is to stand up against American bullying which has since 2016 reached a feverish schoolyard brawl involving most of the world.