Late Tuesday’s attack in Tajoura was a deliberate slaughter of migrants. There is no other palpable conclusion.

Tajoura is a once delightful small town and district on the Libyan coast, technically part of the Tripoli Muhafazah on the Mediterranean coast about 14 kilometres east of the capital.

Tajoura is reputedly an ammunition dump and military base camp for the UN-backed Libyan splinter government.

Despite being a military target in a civil war, some half-wit decided to locate a detention camp housing over 600 migrants in Tajoura. It was a subset of this camp that was hit on Tuesday. The detention centre was struck by an apparent missile, rocket or shelling attack. Something delivered high explosives (HE) on sleeping innocents.

FPMag has spent a couple days digging into this matter and the outcome is more shocking than the initial news. 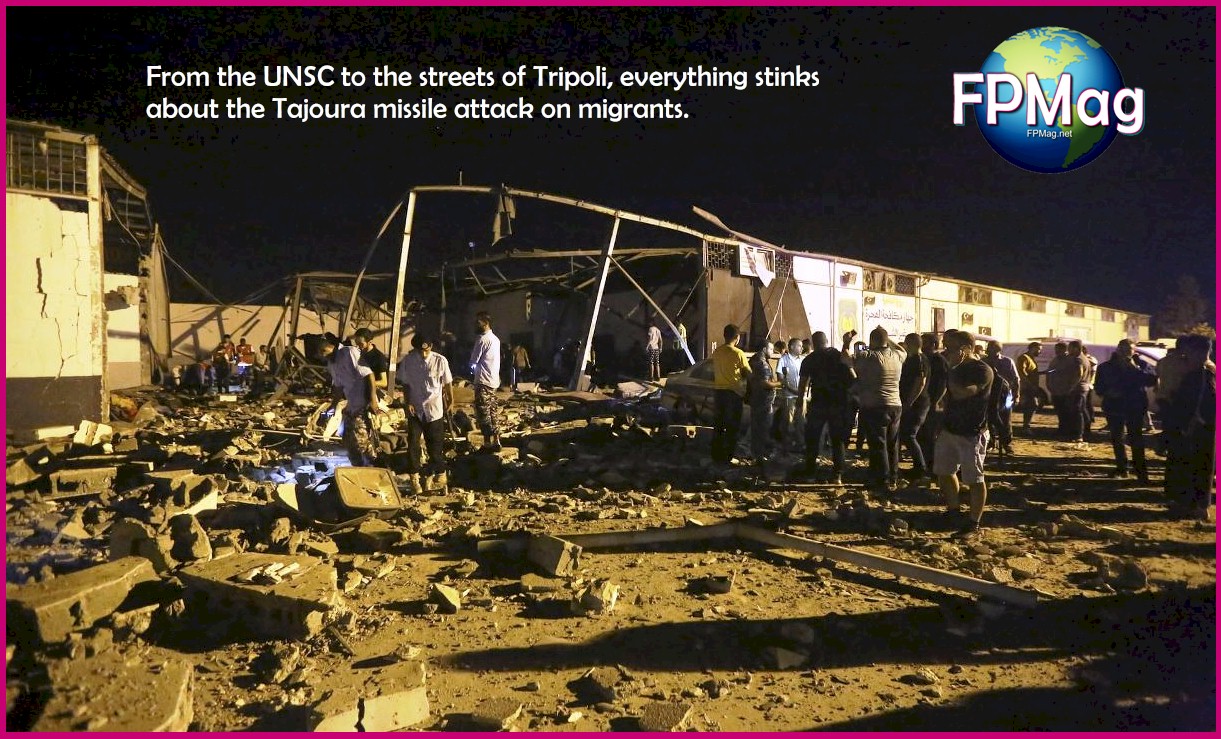 From the UNSC to the streets of Tripoli, everything stinks
about the Tajoura missile attack on migrants. Photo Credit: Hazem Ahmed/AP
Photo Art/crop/resize/enhance: Rosa Yamamoto FPMag

If you ever wanted to see how tight a story could clam up, Tajoura would be a classic example. Everyone who could know is afraid to talk. When you find something that goes this dark from the UNSC to the streets of Tripoli, you know the story’s fingerlings are CIA because they vanished but before they vanish they have left their characteristic watermark of arrogance and incompetence. They always talked without moving their lips. One completed the sentence of the last one but none spelled out the whole sentence. The guy with the coordinates talked to the first guy or the second guy who gave it to the boss. Where is the first guy? Gone. Where? Nobody knows. Who was the second guy? He was short. Where is he? Nobody knows. Where did they come from? “We think, ‘a friend of the boss’, a big-shot American”.

No names. No proof. No accountability. But no way to trace and correct errors. Was this an error? Hardly. Even a teen street gang can deliver ordinance precisely and drone-film the target before and after.

In the alternative, it was an assassination of some of the people in the detention camp or a nasty warning. CIA spies inside refugee camps is nothing new.

From the UNSC to the streets of Tripoli, everything stinks
about the 2 July 2019 Tajoura attack on migrants killing
children & their families. Photo Credit: Ismail Zitouny/Reuters
Photo Art: Rosa Yamamoto FPMag

Immigration Criminals are to blame. There should be an open season on their arrest.

Forty-four persons including women and children were killed and some 130 plus workers and migrant families were seriously injured. The casualties have nothing in common except that they were there for many various reasons. Nothing makes sense.

Moving forward, all parties including the UN and the EU which have been blamed for mishandling the immigration aspects, need to send the migrants home, carry them on your backs if you must, but get it done. This is the way ahead, not spending millions on Coast Guard patrols to block the dilapidated vessels of migrants.

Stop the flow. The fighting factions in Libya must create a truce to clear the country of  victimized migrants and capture and prosecute the fraudsters who are taking their money with a promise of European resettlement. It’s utter nonsense. Libya is being exploited by criminal gangs that make money for terrorists who do further crime.

Libyans could easily put it together that their enemies are not each other. Those who exploit their turmoil must be padlocked. Prosecute the immigration fraudsters and close Libya’s doors to fraudsters herding human slaves.

The Fraud & Cruelty Against Migrant Women and Children

Prisons that house convicted actors who exploit women and children migrants should be forced labour operations that compel the inmates to make and donate baby clothes, baby shoes, plus women’s apparel and carry bags. Seriously.

Among the migrant/refugee caravans that are being piped from Africa’s south aimed fraudulently at a closed door in Europe, are hundreds of thousands of innocents who have paid fees upwards from $1000.00 to make the journey.

This amounts to a multi $billion crime syndicate and a way for generating untraceable wads of cash for clandestine crime operations based in places like China, Indonesia, Syria, Nigeria, Somalia… ‘scumbags’ is putting it nicely.

Migrants become second class humans when Sociopaths like the US President become global leaders and snatch migrant babies from their mom’s arms.

With leaders like the baby-bully in the White House it is hard to encourage compassion for refugees and migrants.

Trump needs to be taken to the wood shed. Instead of trying to muster sympathy for a busload of dead children or a shelter full of migrants, it would be easier to canvass for volunteers among the redneck Canadians who played a bit of hockey and were perhaps known on occasion to do a bit of cross-checking against a bully in the corners.  Like me. That crowd spits on the men who bully babies. It is surprising they aren’t more outspoken.

But Trump’s type exist today. We know that to be true hence we all have a job to do in getting the helpless out of harm’s way. We can’t  just be banning them from Europe but instead must be guiding them home and helping them make home a better place.

Truly, Many Nations no longer care and do not stand #WithRefugees

Better start. Their numbers will continue to grow.

Around the world there are five countries that stand out as brutal creators of refugees. Syria, The United States, Britain, Saudi Arabia and Myanmar.

Probably the most disgusting is the United States because it pretends to be something else. It created the most profound atrocity in the Middle East that will live in infamy a distant second to what the Nazis did.

Today America discourages migration by torturing children and causing their death in concentration camps along the US/Mexican borders. Is that the collective conscience that would be comfortable with the slaughter of innocents in Tripoli?

Britain is a country that called Khofi Anan a “Wog” when he wanted to help the Haitians.

Britain likes to make money selling arms to despots, including the likes of Omar al Bashir, to blast civilians in Yemen.

Britain, driven by its defence-industrial base is trying to leave the European Union against the will of the British people because doing so would enable it to sell more weapons into more places that Europe would otherwise say emphatically, “No way”.

This is an anger and tears issue. These families in Tajoura would never harm any person nor any thing. Why were they targeted? You who killed moms and babies and their families must stop your denials and become a party to the evacuation to their home nations of all detained migrants.

Another segment of the migrants passing through Libya are legitimate migrant workers. Legitimate doesn’t mean they have impeccable residency documents because many of these people are actually illiterate and don’t have a good understanding of what is expected of them. They work on the basis of a referral from a friend or relative who has explained how they got work, maybe just luck of the draw slipping through the cracks of officialdom.

When a foreman in Tripoli sees piles of broken concrete vanishing into barrows of powder to be replaced with new well-formed cement and structure, he is not going to let the good worker go no matter what the paperwork looks like. He won’t put his freedom or life on the line either but he is surely looking the other way from documents toward the completion of a job of work by a good worker. That’s how migrant workers get by. They do hard work well.

Count on that. They get their pay to family back home and they continue to work their butts off and put their hearts and pride into the job.

They bring no harm to anyone. Why target them?

They are often a problem. Young men and even women are recruited in places like Somalia, Sudan, South Sudan, Nigeria, in fact all over Africa. Many never actually enter the ranks of the Jihadists in the Middle East and in Europe as the influence of their recruiters vanish and common sense takes over. Those that continue with an idiopathic bent are a real problem. Did America target a particular group? What’s going on?

One of the core issues in Libya is outside interference and exploitation. There is a pervasive mistrust for outsiders, especially whites. Maybe there should be more mistrust.

Migrants, accumulating in Libya because of the acts of illegal human smugglers and the push back from the European Union, are devalued humans. These migrants are apparently acceptable collateral damage.

The smugglers, while being casually targeted by law enforcement are the real enemy of the people in Europe.

The UN says its Secretary-General is outraged by reports that at least 44 migrants and refugees, including women and children, have been killed and more than 130 injured following air strikes at the Tajoura migrant detention centre, east of Tripoli.  He condemns this horrendous incident in the strongest terms.  He expresses his deepest condolences to the families of the victims and wishes a quick recovery to those injured.

The Secretary-General calls for an independent investigation of the circumstances of this incident, to ensure that the perpetrators are brought to justice, noting that the United Nations had provided exact coordinates of the detention centre to the parties.  The Secretary-General further reminds all parties of their obligations under international humanitarian law to take all feasible precautions to avoid, and in any event to minimize, incidental loss of civilian life, injury to civilians and damage to civilian objects, and to refrain from directing attacks against civilians.  This incident underscores the urgency to provide all refugees and migrants with safe shelter until their asylum claims can be processed or they can be safely repatriated.

The Secretary-General reiterates his call for an immediate ceasefire in Libya and a return to political dialogue.