The world reacts to the murder of Qassem Suleimani but Trump mass murdered more than 12 officials in Baghdad on their way to a New Year’s soiree.

Hundreds of their family members and friends are in states of shock and grief “and will be mourning for a long time”, says one family member.

Author’s Note: In my research for this article, sources begged me to urge all white anglos of North America and Europe to leave the Middle East immediately.

Up to 5,000 US troops are on their way to Iraq as NATO suspends its operations and orders troops in Iraq to hunker down.

Since the USA mass murdered these persons at  33°15′29″N 44°15′22″E (Baghdad) on or about 3 January 2020 1 a.m. (local UTC+3), the world has been tense as Iran promised to drive America from the region and protestors scorned the US embassy in Baghdad inside the so-called “Green Zone” protected area forbidden to most Iraqis.

“The world cannot afford another war in the Gulf,” noted Farhan Haq, Deputy Spokesman for the UN Secretary-General.

Qassem Soleimani’s remains were returned to Iran today and flown to the city of Ahvaz in the country’s southwest, the official IRIB news agency reported. A funeral is currently underway.

The humanity component of Trump’s Mass Murder has been lost but it is out there among hundreds of millions.

“Words don’t describe the painful reactions I see in many families with broken hearts,” he added.

Zeinab Soleimani (29) & her brother Mohammadreza Soleimani (24), according to officials of Iran President Rouhani’s office contacted by FPMag, “are devastated—completely devastated. Their papa was so good to them and they are crying every minute [translated].”

Mohammadreza Soleimani is a very popular Iranian football forward who currently plays for Saipa in the Persian Gulf Pro League. He has played since he was a toddler and is an Iranian heartthrob. His followers are enraged by the murder of his father, Qassem Suleimani. 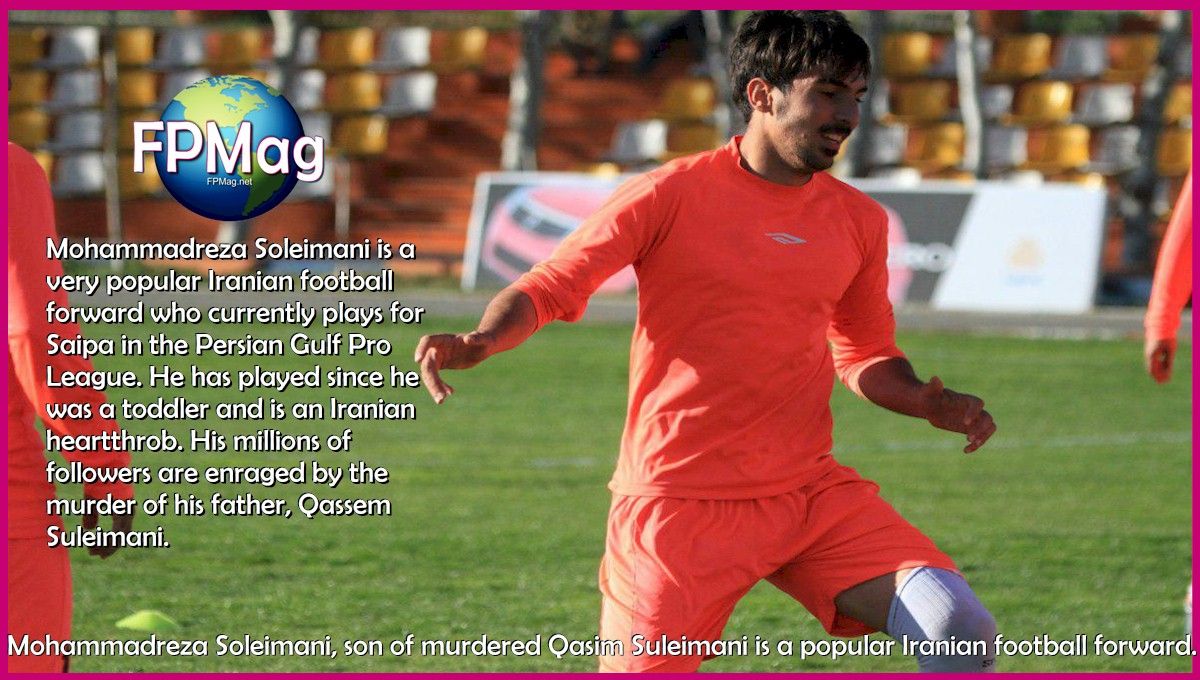 Qassem Suleimani was a General in the Iraq/Iran Militias as was David Howell Petraeus a general officer in the US military during the 8-year American invasion of Iraq. Both of these military leaders were responsible for the deaths of many.

The murder of Suleimani is widely noted but the emotions of families, women and their children of a dozen more officials deceased as a result of a Donald Trump mass murder, have broken the hearts of millions of Shiites and stirred more than a hornet’s nest of anger. 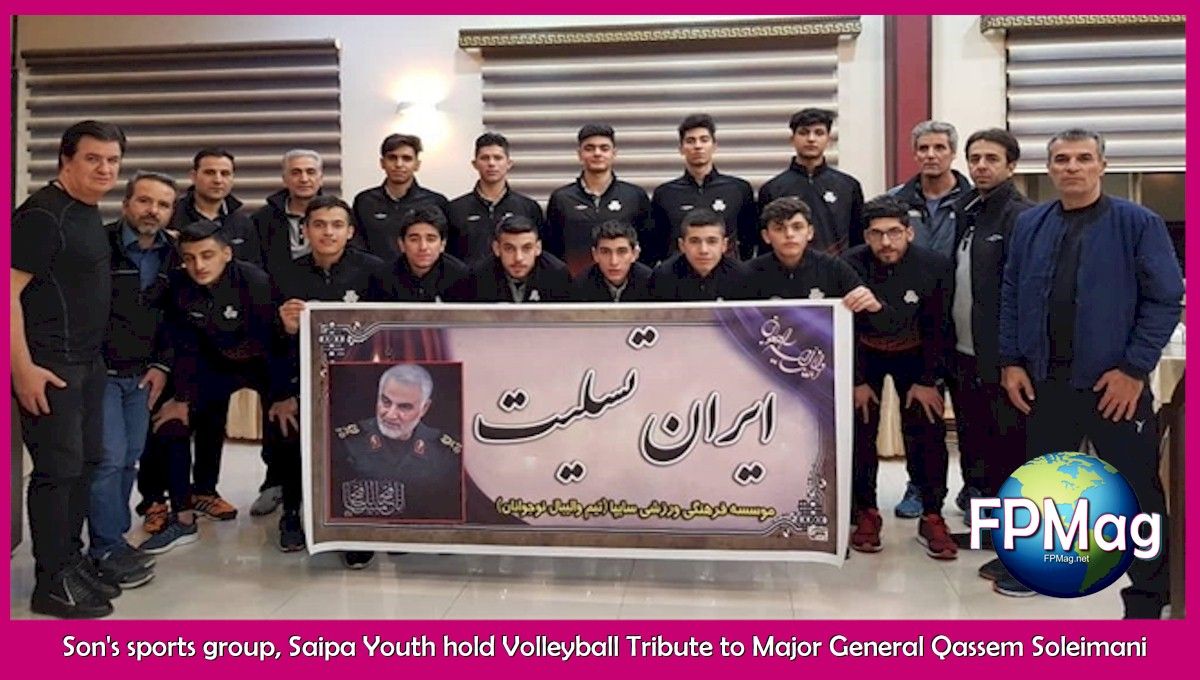 Tehran, Iran—Millions Mourn in Funeral procession that extends many kilometres.

In a de facto sense, Iraq is still Occupied. 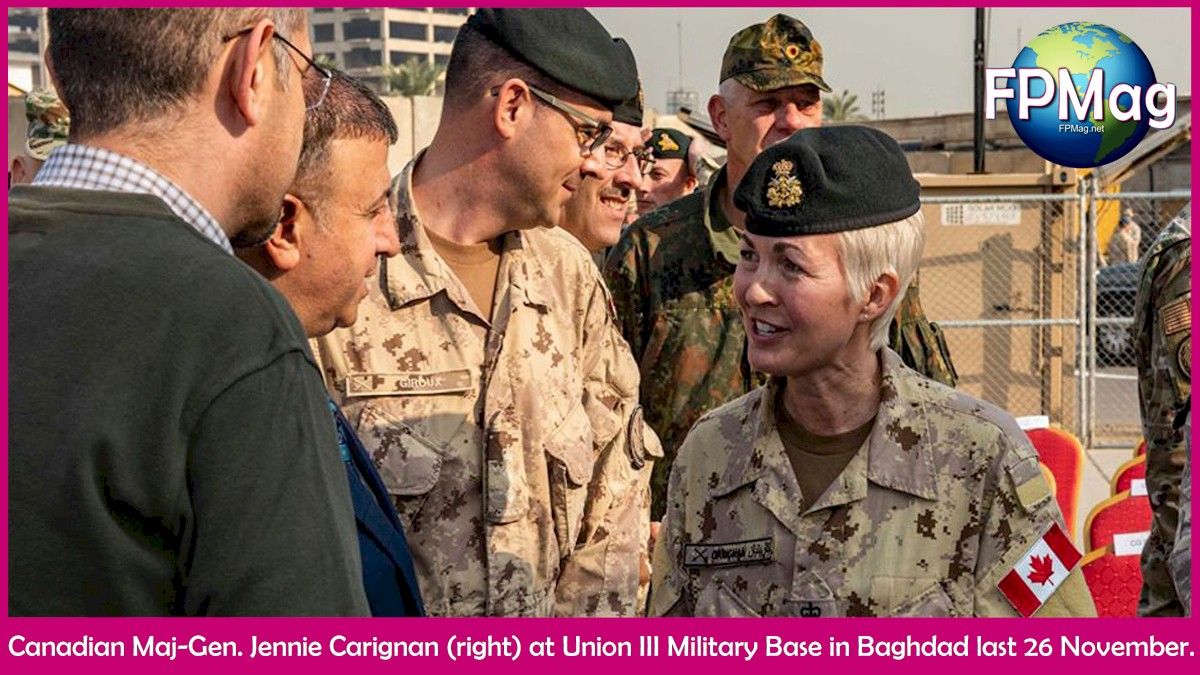 More than 18,000 US Coalition Forces including  some 3,000 US contractors, 9,000 US Forces, thousands of ‘Coalition-nation troops’ and thousands of American-trained surrogate fighters under project 127 echo.

The American-attacked Iraqi bases were allegedly Hezbollah locations the Iraqi Prime Minister claims the Iraqi Shia militia units are official components of the Iraqi military and correspond to the fact that 68% of the Iraq population is Shia Muslim.

US Embassy is endangered.

According to official documents, and a recent visit to the US Embassy complex in Baghdad, the facility spanning 104 acres (42ha) has  5,640 plus workers of the US State Department and US Department of Defence.

FPMag correspondent Saif Abdul-Ahad in Baghdad reports that the complex was reconstructed in 2006, “along the Tigris River, west of the Arbataash Tamuz Bridge, facing Al-Kindi street to the north”. 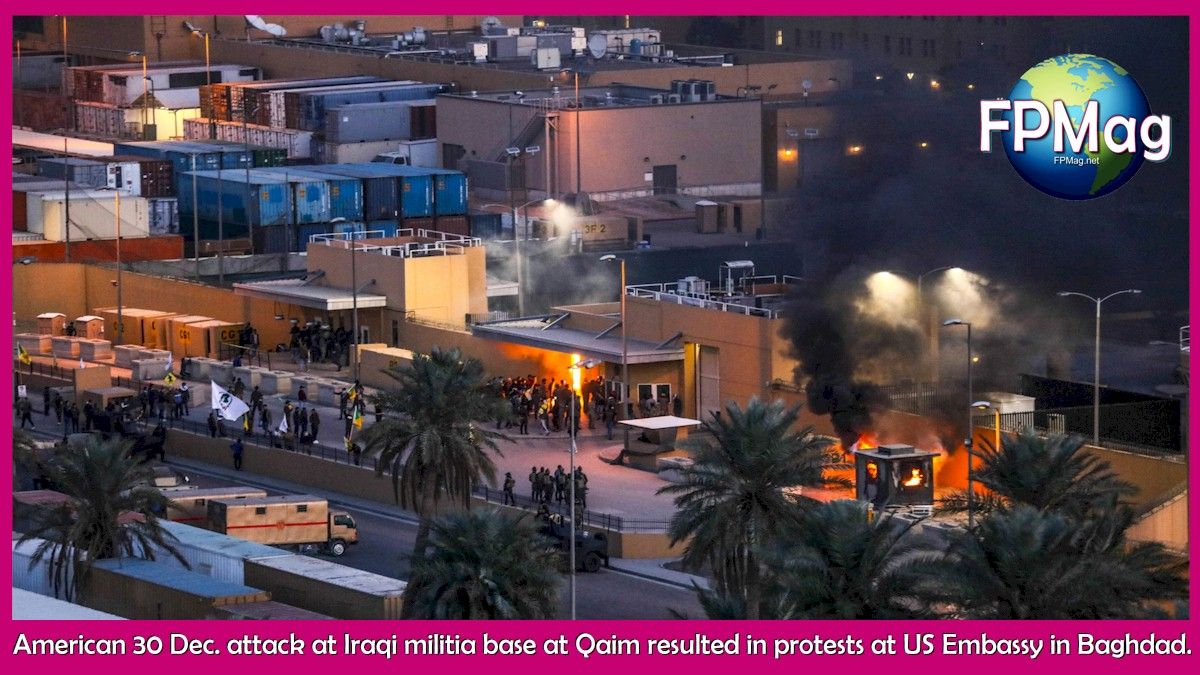 The USA Embassy in Baghdad came under siege by Iraqi citizens who protested the recent American attacks against Iraqi facilities. The protests came on New Years Eve and New Year’s day in response to US bombing of Iraqi militia in Iraq.

Yesterday, rockets landed near the sprawling US embassy but without any loss of life or significant property damage.  Photo Credit: US Army/Staff Sgt. Desmond Cassell/Task Force-Iraq . Photo Art/Cropping: Rosa YamamotoFPMag

“Persians in Iraq have been given a rough time,” says  Saif Abdul-Ahad, FPMag correspondent. “That might be putting it mildly,” he added. “Saddam Hussein bombed the Shia from 1990 to 2003 and in all their history they have been the poor Persian cousins on the Shiite/Sunni divide who had no say in family affairs—no representation on the Iraqi government. And that is why Iran in recent years has invested a lot of money to support Iraqi-Persia.”

“The addition of Shia militias to the official Iraqi military command began in 2014 and is a departure from the past decades during which time the military of Saddam Hussein until 2003 and the Iraqi military of the American occupiers up until 2011 was almost entirely Sunni Muslim from the central regions of Iraq,” says Saif Abdul-Ahad.

“For nearly a century, the [Iraqi] nation’s 15 million Shiite Muslims have been denied access to political power,” noted Andrew Cockburn of the Smithsonian Institute in 2003.

The quasi-autonomous Kurdish region of the north had its own military in the past decade, supported by American and Canadian military efforts toward supply and training. 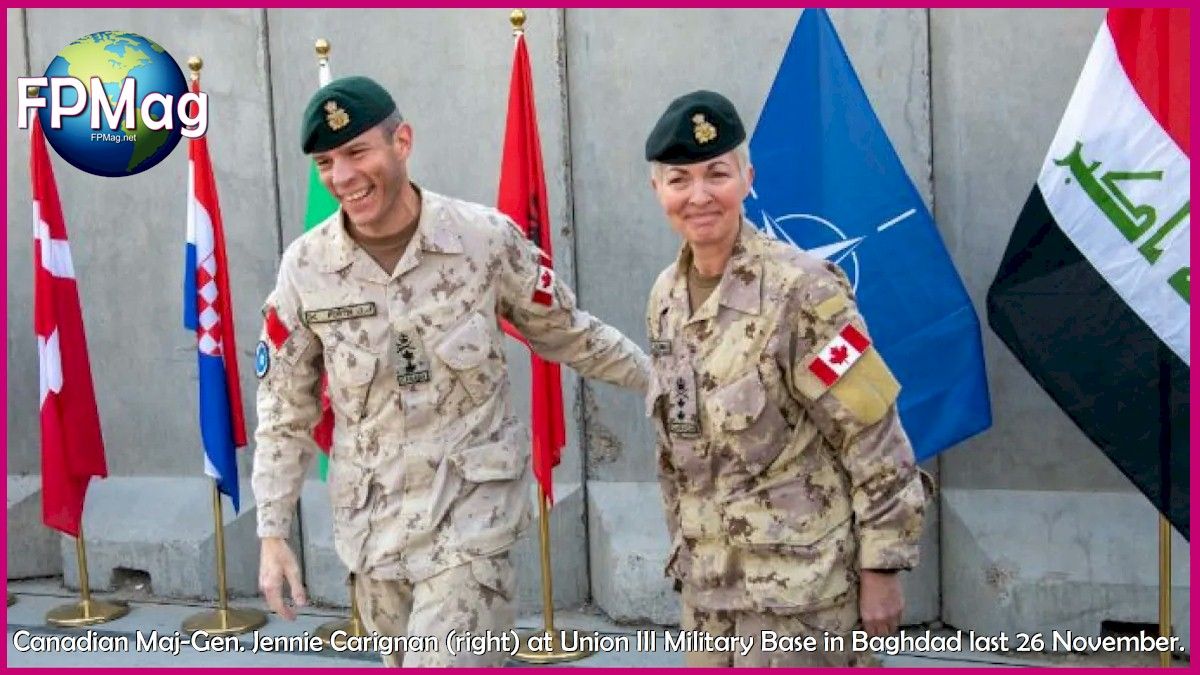 Including 500 service personnel in the north (Kurdish region)  and 250 with the NATO mission in the south of Iraq, Canada unofficially has in total including civilians close to 1000 observed personnel based in Iraq.
The picture and its story: Canadian led NATO operation in Iraq shut down yesterday by NATO Command. Baghdad, November transfer of command photo: Canadian Major-General Dany Fortin (left) transfers command of NATO training unit to Canadian Maj-Gen. Jennie Carignan (right) at Union III Military Base in Baghdad last 26 November. NATO operates bases at Taji and Besmaya. Photo Credit: NATO ~ FPMag

“The safety of our personnel in Iraq is paramount,” acting NATO spokesman Dylan White said in a statement. “We continue to take all precautions necessary. NATO’s mission is continuing, but training activities are temporarily suspended.”

Background: “Seventeen Years of Occupying Iraq did not teach America very much, apparently.”

The statement (“Seventeen Years of Occupying Iraq did not teach America very much, apparently.”) comes from a family friend of the author in Kirkuk, Iraq who has been angry that an American base has been located in his city. He is a former Republican Guard member under Iraqi President Saddam Hussein (overthrown by America in April 2003) and does not want his name mentioned.

What the former Republican Guard Colonel is referring to is the fact that Iraq is comprised of parts of Persia since 1922 is something that Washington DC and likely all of America has never come to grips with. Neither Saddam Hussein or the American occupiers got along with the majority Shiites of Iraqi-Persia.

US Occupation of Iraq reaches 17 years in April

“The irony,” he says, “is that the USA invaded Iraq in 2003 and occupied the country it seemingly knows little about for eight years officially and in a defacto sense has occupied Iraq since April 2003 until now, a period of nearly seventeen years by next April.”

One explanation notes Saif Abdul-Ahad is that “America allowed the British occupiers to control southern Iaq (Iraqi-Persia) and never had much to do with it.” 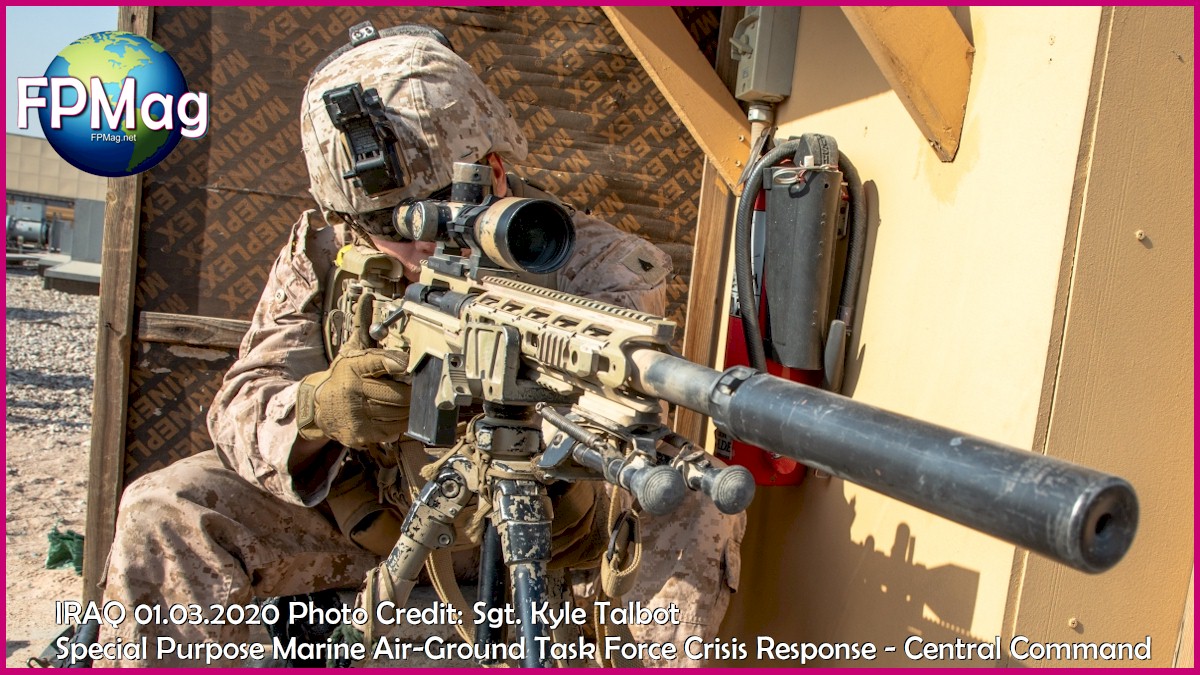 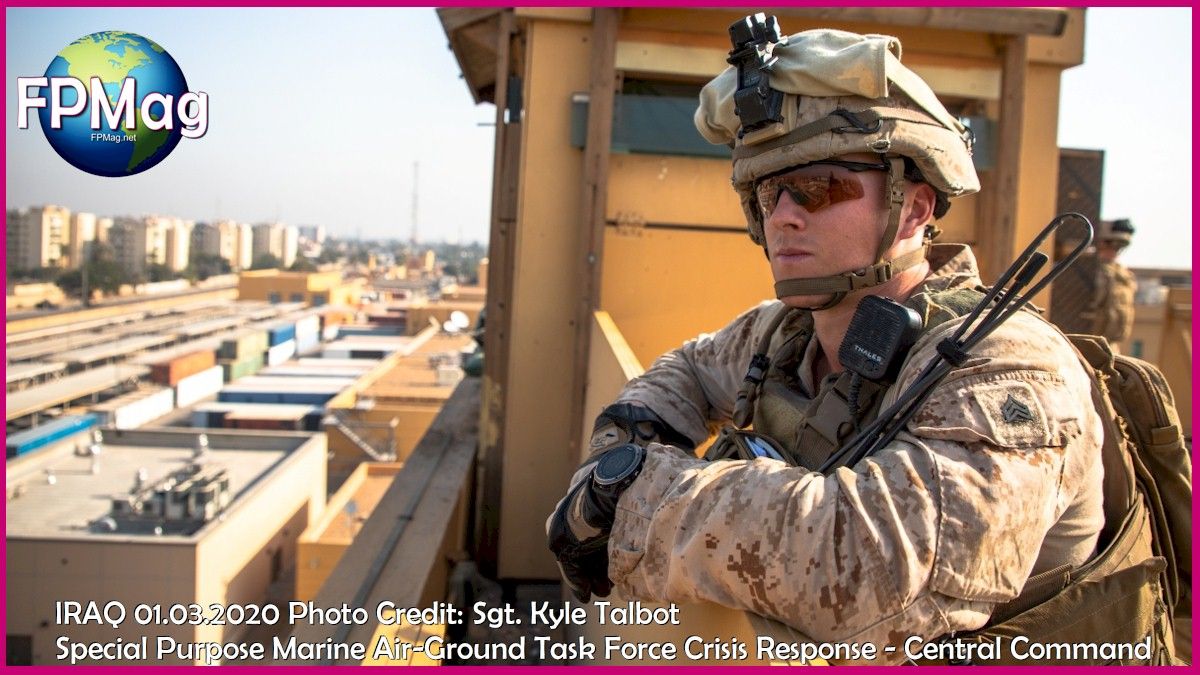 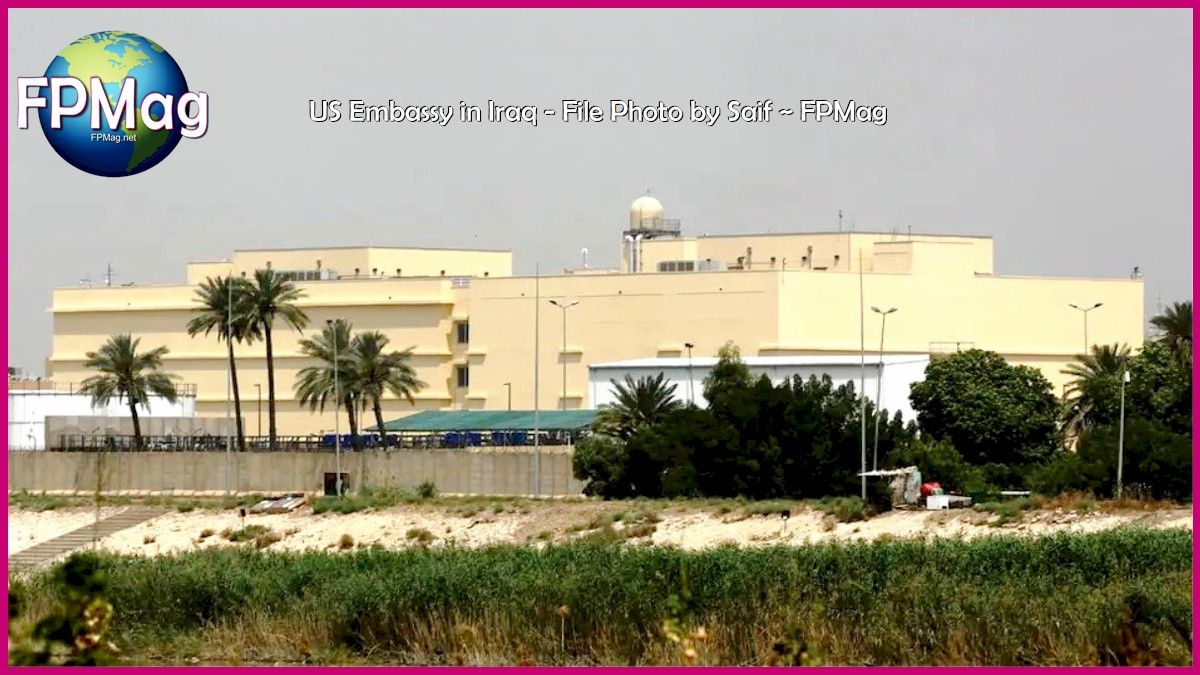 At 104 acres (42 ha), it is the largest and most expensive embassy in the world. File photo by  Saif Abdul-Ahad, FPMag correspondent. Photo Art/Cropping/Enhancement: Rosa Yamamoto FPMag

This type of operation is done under what is called “The 127 Echo Programme” as explained during a US House of Representatives inquiry set out during the “Evaluation of the Department of Defense’s Counterterrorism Approach” on Wednesday, 6 February 2019.

An example is the attack and destruction of a Popular Mobilisation Forces (al-Hashd ash-Shahbi) medical convoy on 4 January 2020 along the Taji Road north of the Iraq capital of Baghdad. The United States military’s surrogates trained in American facilities in Iraq attacked and killed or injured up to a dozen medical crew members of the Iraqi al-Hashd ash-Shahbi militia.

“This evolving counter-terrorism operation construct will place even greater emphasis on successful programs, such as the 127 Echo program, which provides us viable surrogate forces designed to achieve U.S. CT objectives at relatively low cost in terms of resources and especially risk to our personnel,” notes Maj. Gen. James Hecker, vice director for operations.

“The small-footprint approach inherent in 127 Echo, in addition to lessening the need for large scale U.S. troop deployments, fosters an environment where local forces take ownership of the problem,” Hecker added.