Trump’s lies; the USA violation of the JCPOA; & now America’s mass murder of a dozen Iraqi & Iranian officials heading to a party together are a global breach of the peace. Trump must go.

Lie: “General Soleimani was actively developing plans to attack American diplomats and service members in Iraq and throughout the region…
Lie: This strike was aimed at deterring future Iranian attack plans.”

Lie: It gets worse: Michael Pompeo, the consummate neocon Trump-sycophant told CNN Friday that the killing of the Iranian general disrupted an “imminent attack”. Without a doubt, none of these old men mass-murdered in the attack, some in their sixties and seventies, were about to attack anything except maybe a side of beef or mutton.

If the fibbed attack on American Diplomats was imminent on New Years day, how could the Pentagon nonchalantly have advised Israel a month ago that it would soon kill Qassem Suleimani for Bibi? 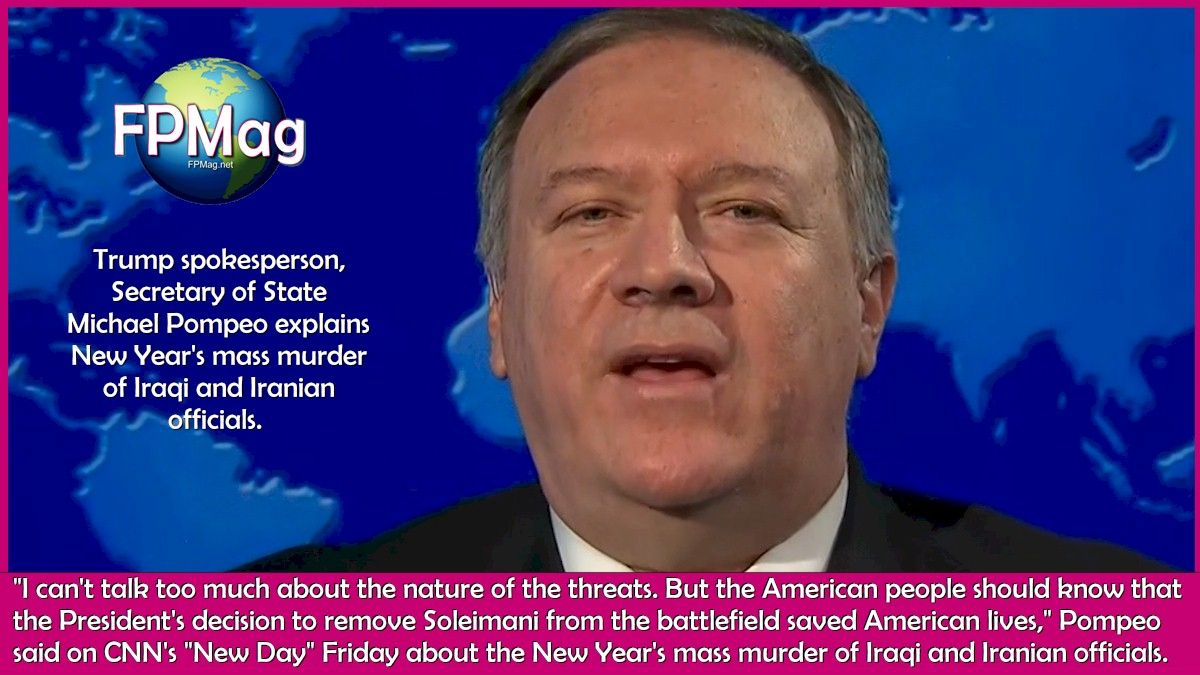 “I can’t talk too much about the nature of the threats. But the American people should know that the President’s decision to remove Soleimani from the battlefield saved American lives,” Pompeo said on CNN’s “New Day” Friday about the New Year’s mass murder of Iraqi and Iranian officials. Photo Credit: CNN New Day—Photo Art/Cropping/Enhancement: Rosa Yamamoto FPMag

Ed. Note: In covering wars since 1979, more than a dozen, this state murder of senior Iraqi and a couple Iranian officials all crammed conveniently into into two SUVs headed for a New Year’s Party—Qassem Suleimani and the brilliant Hossein Pourjafari (Assistant to Suleimani), Abu Mahdi al-Muhandis, Shahroud Mozaffari Nia, Hadi Taremi, Vahid Zamanian (bodyguard), Muhammad Radha al-Jabri, Hassan Abdu al-Hadi, Muhammad al-Shaybani and Haider Ali—is the most unrestrained stupidity of any Pentagon I have ever covered.

The Iraqi government in Baghdad is in such a state of being pushed and pulled by Washington and Tehran that it awkwardly collapsed. It would have been no surprise if its entire parliament had been corralled into those two SUVs or walked alongside loudly blowing kazoos.

This mass murder event leaves behind the most brazen, angry, overzealous, undisciplined zanies ever assembled to run a madhouse as Iraq has become. That’s who will fill the vacuum in Iraq created by a mass murder of a dozen officials and their drivers.

Concomitantly Iran’s government is made stronger and nearly invincible inside Iran with a full mandate from its people to develop thermonuclear weapons and intercontinental ballistic missiles, helped by America’s enemies, and even maybe assisted by pseudo-friends. That’s the word behind the curtain, in the shadows. 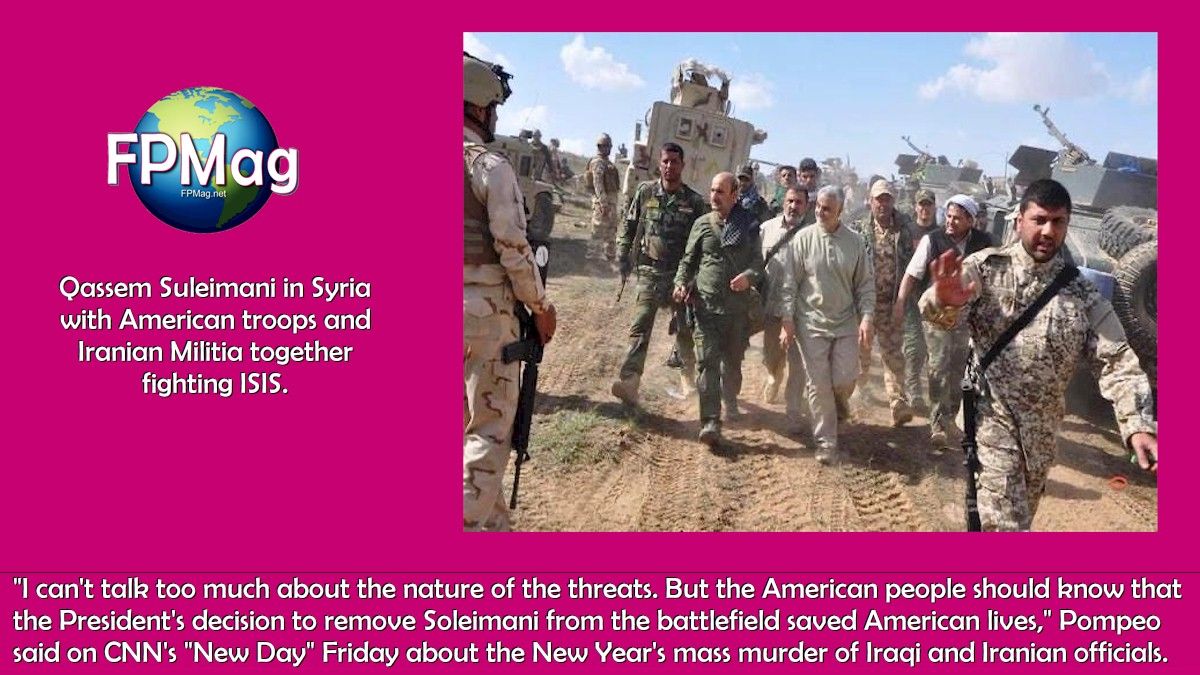 When pushed by a Reuters journo during a briefing for journalists on Friday, a senior State Department official said: “Whether the specific plots that Soleimani has unleashed were so far advanced that they may be able to carry them out, I don’t know.”

A source in Tehran who personally knows many members of the Quds unit of Iran’s Revolutionary Guard Corps says that, “Soleimani is not significantly involved in the regular operations and any ops that were in process would go ahead with or without him.”

“There have been none because there were none,” she added.

Here is Why the USA Attacked Qassem Suleimani

The US believed Naim Qassem, a deputy-leader of Hezbollah, was aboard the convoy, but his organization claims he was not and that he is alive and well. Whatever information the US had would have caused some eyes to open wide.

Note: The USA should have a bone to pick with Naim Qassem as does most of the world. Naim Qassem is truly a scumbag. He, as a 30-year-old Jihadist, who is on one of my old lists going back to the October 1983 bombing of the US Marine Corps and French army barracks in Beirut that killed 305 serving men and women. I believe he was involved in that crime and for that I at some emotional level would have bombed the convoy myself for the friends I lost in October 1983. I had been working on a Maclean Hunter defence and foreign affairs journal then and had some good friends among the American and French serving men and women. If Qassem wasn’t blown up in the convoy, there is no justice.

In a book published by the deputy secretary-general of Hezbollah, none other than Sheikh Naim Qassem, entitled ‘Hezbollah — the Approach, the Experience, the Future‘, Qassem writes, “Hezbollah is a jihad organization whose aim, first and foremost, is Jihad against the Zionist enemy, while the political, pure and sensible effort can serve as a prop and a means of support for Jihad”. He is a terrorist scumbag and serves no useful purpose to any part of the human kind. 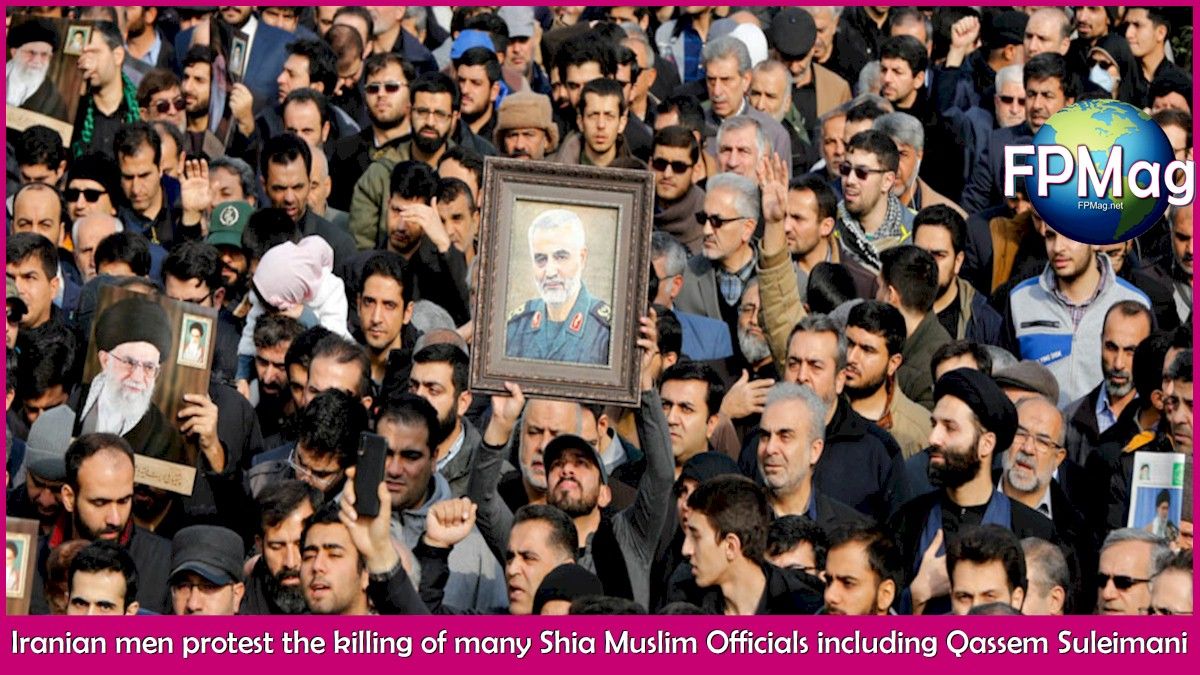 In the real world aftermath of murdering these people.

Iran is doing fine but the leadership of the Iraqi militia al-Ḥashd ash-Shaʿbī is pretty much wiped out.  How soon that void will be filled by an angry and overzealous third line is a matter of conjecture but Iran is meanwhile fully functional.

Iran’s leadership will anoint Qassem Suleimani as a national saint; continue a national period of mourning for a while; erect statues inscribed with Qassem Suleimani’s considerable accomplishments including keeping Iran out of wars since 1988; and make a big deal of the satan who killed the revered General Suleimani, hero to the people of Iran and villain to the thugs of the Islamic State he fought so valiantly.

The beautiful but hungry and tired people of Iran will continue to freeze in the dark as sanctions drive prices higher reducing food choices to sawdust and weeds.

None of this is going to help the beautiful people of Iran who suffer an intolerable government and yet have no friends in the world who will really help the kindest and most loving humans that comprise Iran’s vulnerable Shia population. America and Saddam Hussein together did the same thing to the Shiites in Southern Iraq from 1990 to 2003.

Meanwhile Russia is annoyed plus very worried at the arrogance of Trump slaughtering people Washington DC randomly doesn’t like, but the Kremlin nevertheless hopes, and should hope, that the price of oil goes through the roof. As FPMag’s Rosa Yamamoto wrote on Twitter, “let the price of oil go sky high so that oil producers can make money selling less oil and we can all breathe cleaner air”.

Mohammed bin Salman (a.k.a. MbS) is anxiously wringing his hands. The biggest favour Iran could do the world is to blow the murderous House of Saud off the face of the Earth so Jamal Khashoggi can chuckle as the pieces fly past on their way to hell. It then might survive. Earth, that is…