One of the most awkward positions to take in the globally misogynistic world of business is to support woman-led corporations as if there is such a thing as gender equality.

The business patriarch is cult-like in its brutal, testosterone-driven conduct. For example, if this were not true, how could the boardrooms of the world adamantly boost fossil-fuel burning, an act that expert scientists say despite the gobs of money raked in by a few, will kill children and their families plus Earth itself.

Moreover this patriarch denies that pollution, the environment, and climate change even matter when there is money to be made today.

Women-led corporations tend to protect stakeholders–that’s everybody on Earth. 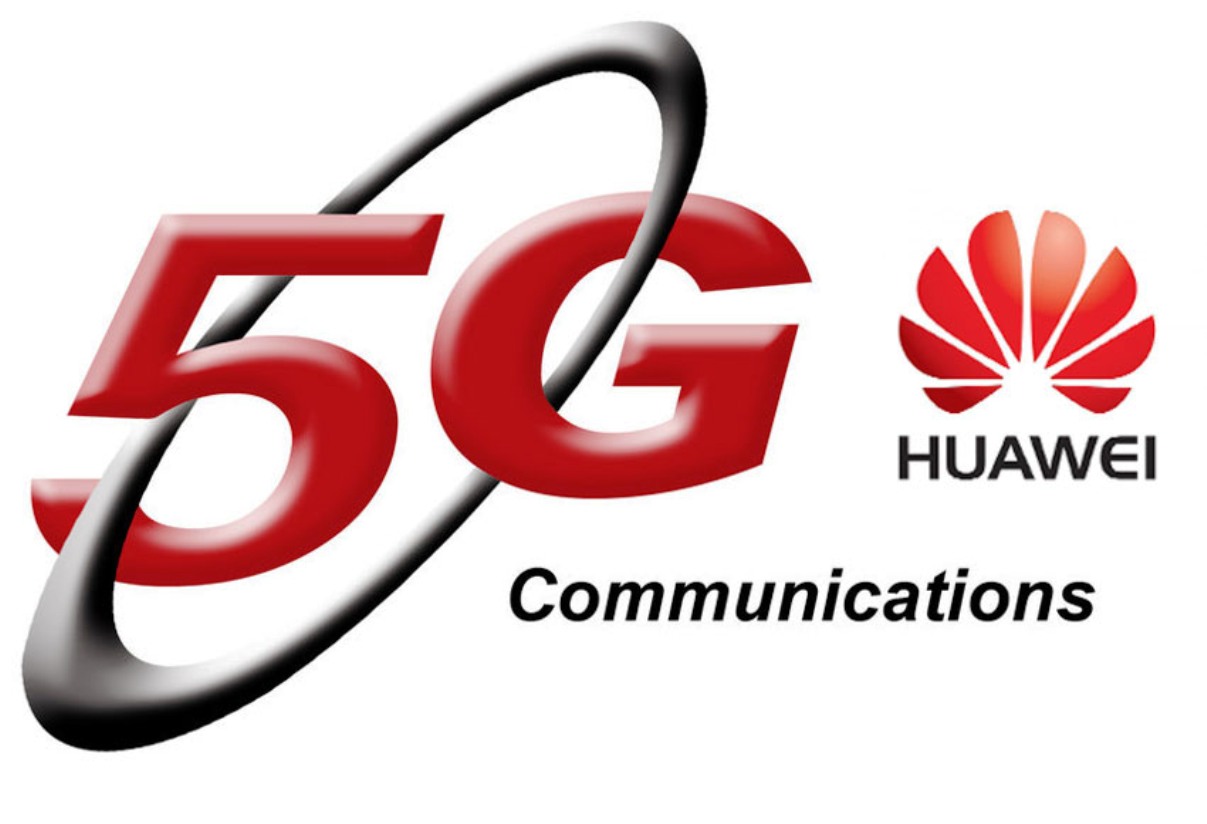 The RINJ Foundation has lauded the extraordinary achievements of  Mary Teresa Barra, the Chairwoman and CEO of General Motors Company who was recently attacked by the extremely misogynistic US President Donald Trump .

Trump was angered because of the necessary realignment of  GM in order to leave behind fossil-fuel burning and adopt cleaner and more sophisticated options for automobile power plants.

The global civil society  RINJ women’s group has also championed the case of the women-led corporation Huawei Technologies as one that follows a more family-focus feminine perspective with intelligent team-building and innovation-sharing, inclusive of partners around the world plus the end user. Huawei in cooperation with scientists especially in Asia and Europe has inspired and injected innovation to the new, revolutionary technologies of   5G  – AI – IoT.

Today The RINJ Foundation has issued a statement via the Canadian Wire Service in which it sets out research findings in the Meng Wanzhou matter and denounces America’s and Canada’s conduct which it claims has violated the rights of Sabrina Meng; used an extradition treaty process for improper purpose; and insulted the Chinese people.

Concomitantly the United States claims it wants Sabrina Meng extradited to America by proactive intervention of Canada because allegedly Ms. Meng tried to trick HSBC bank (which was under indictment itself and willing to say anything to find relief)  into breaching sanctions against Iran which Canada is not part of and most of the world disagrees with. That means that Meng has not commit a crime in Canada nor in China.

The claim that America is violating the human rights of this woman for commercial and political purpose has been confirmed by statements by the US President Trump and by subsequent events and investigative reports on the matter including a detailed New York Times article entitled: In 5G Race With China, U.S. Pushes Allies to Fight Huawei.

China has diligently invested in its scientists and their education plus inserted substantial R&D funding to its industry’s research and development efforts to become the world’s largest innovation economy.

According to Forbes as cited above, “In just one generation, something like 300 million+ [of China’s] people went from rural subsistence farming to urban industrial and technology jobs. This transition from rural poverty to export powerhouse to consumer goliath may be the most consequential economic event in centuries.”

According to Maurice R Greenberg, Senior Fellow for China Studies at the Council on Foreign Relations, the US and China need to cooperate. But Huawei has met with considerable difficulty working with America, even though American industry finds that to be worthwhile.

Conduct in the Meng Wanzhou Case is unforgivable and extremely dangerous given the significance of the 5G – AI – IoT Revolution.

China has shown restraint but the Canadian government has been disingenuous  about the detention of two Canadians accused of committing crimes, claiming they are retaliations, but they don’t appear to be that and there are statistically no increases in arrests or detention of Canadians in China. None.

China has said publicly it is opting to refrain from recrimination while waiting for a Canadian Court’s decision on the American case.

Justin Trudeau, the Prime Minister of Canada struggled to maintain Canada as a party to the replacement for the North American Free Trade Agreement (NAFTA) involving the USA, Mexico and Canada. Trump threatened repeatedly to leave out Canada and called the Canadian Prime Minister many very rude names.

That was an evil anvil over Trudeau’s head because if Trudeau does not either maintain NAFTA or come up with a suitable replacement, his political career is jeopardized by Trump. So is his Liberal Party in this year’s election.

The saddest part is that despite Trump’s trumpet blowing, it is a good deal for Canada and almost a same condition deal. But electors in Canada are unlikely to read the entirety of the old and the new. Consequently in an election year, Trudeau’s enemies can pretty much say anything they want. It’s a vulnerability until ratified and Trump holds that over Trudeau as well.

According to Geoffrey Gertz, a Fellow (Global Economy and Development) of the Brookings Institute, “The changes from the old NAFTA are mostly cosmetic. After a year and a half of negotiations, the three parties are going to end up with a new trade deal that looks remarkably similar to the old NAFTA. The main structure of the deal is largely intact; the biggest changes include higher rules-of-origin requirements for the auto sector, marginally greater U.S. access to the Canadian dairy market, and a scale-back of the investor-state dispute settlement (ISDS) rules.”

This USA-Mexico-Canada-Agreement (USMCA) was signed on 30 November 2018 at the 2018 G20 Summit in Argentina by the leaders of the three countries. It has not been approved by the US Congress which is a ‘must-achieve’ before the USA is in anyway bound by the agreement. Trump will need to do some fancy dancing to get Congress to pass the deal. Congress is allergic to anything that Trump touches.

Coincidence? The day after Sabrina Meng  was detained while on her way to a connecting flight to Mexico at Vancouver Airport,  on 2 December 2018, U.S. President Donald Trump announced that he would ram the deal at Congress. He said he would begin the 6-month process to withdraw from NAFTA, urging  that the US Congress needed either to ratify the USMCA or roll back the North American trade status to what he may not realize was the pre-NAFTA and global groundbreaking Canada-Us Free Trade Agreement (FTA signed 2 January 1988 by Canadian Prime Minister Brian Mulroney and US President Ronald Reagan) trading rules.

For numerous reasons, Trump has held the completion of the USMCA over Trudeau’s head.

Multiple informed sources close to the matter tell FPMag that Trump threatened Trudeau with dumping the deal and work only with Mexico leaving Canada out of the North American trade deal.  Trump has three requirements related to his attack on Huawei and China via the Chinese Princess Sabrina Meng, CFO of Huawei and Vice-Chair of its Board of Directors. Canada must:

Canada has joined America in a sick manipulation to shut out an emerging and developing economy, China. That conduct slams global human development goals and redefines human rights crime. Using the apparatus of these men’s countries they are smashing the accomplishments, endeavours and dreams of Chinese women who saw this innovation skyrocket in the hands of some of the brightest women leaders on Earth. The only reason Trudeau gets away with this crime is that the Canadian public does not understand the global revolution that us under way. From FPMag : Attacking China because Huawei is amazing is immoral war.

The claim that America is violating the human rights of this woman for commercial and political purpose has been confirmed by statements by the US President Trump and by subsequent events and investigative reports on the matter including a detailed New York Times article entitled: In 5G Race With China, U.S. Pushes Allies to Fight Huawei.

The RINJ Foundation, a civil society women’s group based in Toronto has long established an interest in the women-led corporation Huawei Technologies as one that follows a more family-focus feminine perspective with intelligent team-building and innovation-sharing, inclusive of partners around the world plus the end user.

Through a series of reports the RINJ group has set out that:

The American attacks on Huawei claiming the company is a spy have no evidence to support the claims over the past thirty years, moreover, all the allegations are of privacy violations for which the accuser has been found guilty. See: Proof: Beware Five-Eyes Anglo SmartPhone spies. Not China.

The accuser has been alleged to abuse the private information of internet users to win elections and is the subject of an ongoing investigation related to collusion with Russia in the 2016 controversial presidential election.

The accuser has spent too much of its money for wrongful military purpose costing far too many civilian lives and has neglected research and development investment for the benefit of its citizens. It now attacks emerging and developing China which has done its due diligence and surged ahead to benefit from its own achievement.

Meanwhile China has diligently invested in its scientists and their education plus inserted substantial R&D funding to its industry’s research and development efforts to become the world’s largest innovation economy.

The accuser is an abusive bully that has made threats to allies in order to coerce those nations it feels it can manipulate.

The accuser relies on a so-called security group known as
Five Eyes (FVEY) which by its own admission is a racist group that seeks to advance only the interests of what has often been described as the “anglosphere” and operates on the principle that all Asian nations and peoples are enemies with ill-intent.

The security group known as  Five Eyes (FVEY) on its resume and record of achievement has its notorious allegation of Iraq and Saddam Hussein being in possession of weapons of mass destruction such as atomic bombs and chemical weapons none of which have ever been found but after making its allegation it thereafter proceeded to kill a million Iraqis in order to end the rule of Saddam Hussein.

The security group known as  Five Eyes (FVEY) therefore has no credibility and cannot be trusted to make decisions that could again lead to major war.

The accuser, America, has through an abuse of process related to an extradition treaty with Canada compelled Canada to enjoin American malevolence toward the people of Iran and the people of China which is not the wish of Canadians by any plebiscite or election.

In the event that the Canadian Prime Minister seeks a mandate to engage in war with the countries to which it enjoins American malevolence, he should issue a plebiscite or call an election in order to enlighten Canadians of the extreme risks he is taking.

Ordinarily the markets decide what direction consumers wish to take in the purchase of consumer technology but the accuser of Meng Wanzhou says that it must be the decider.

In a statement it published Monday, the RINJ group said that “Firing Canada’s Ambassador to China John McCallum, looked a lot like Trudeau pouring gasoline on his career and setting fire to it. McCallum was correct in all that he said to criticise the American case against Canada’s Justice department  and Sabrina Meng. Moreover, McCallum  is an honest man who put Canada first and political expediency last.”

see: Attacking China because Huawei is amazing is immoral war.

In it’s statement of today, The RINJ Foundation says that as a Canadian entity it disowns the actions of Canada’s government in cooperating with the ill-intentioned  accuser of Ms. Meng in this matter of 5G – AI – IoT technology advantages, no matter if Canada’s normally wise leadership acts wrongly out of:  willfulness, out of being deceived or bullied by the accuser,  or out of naivete. 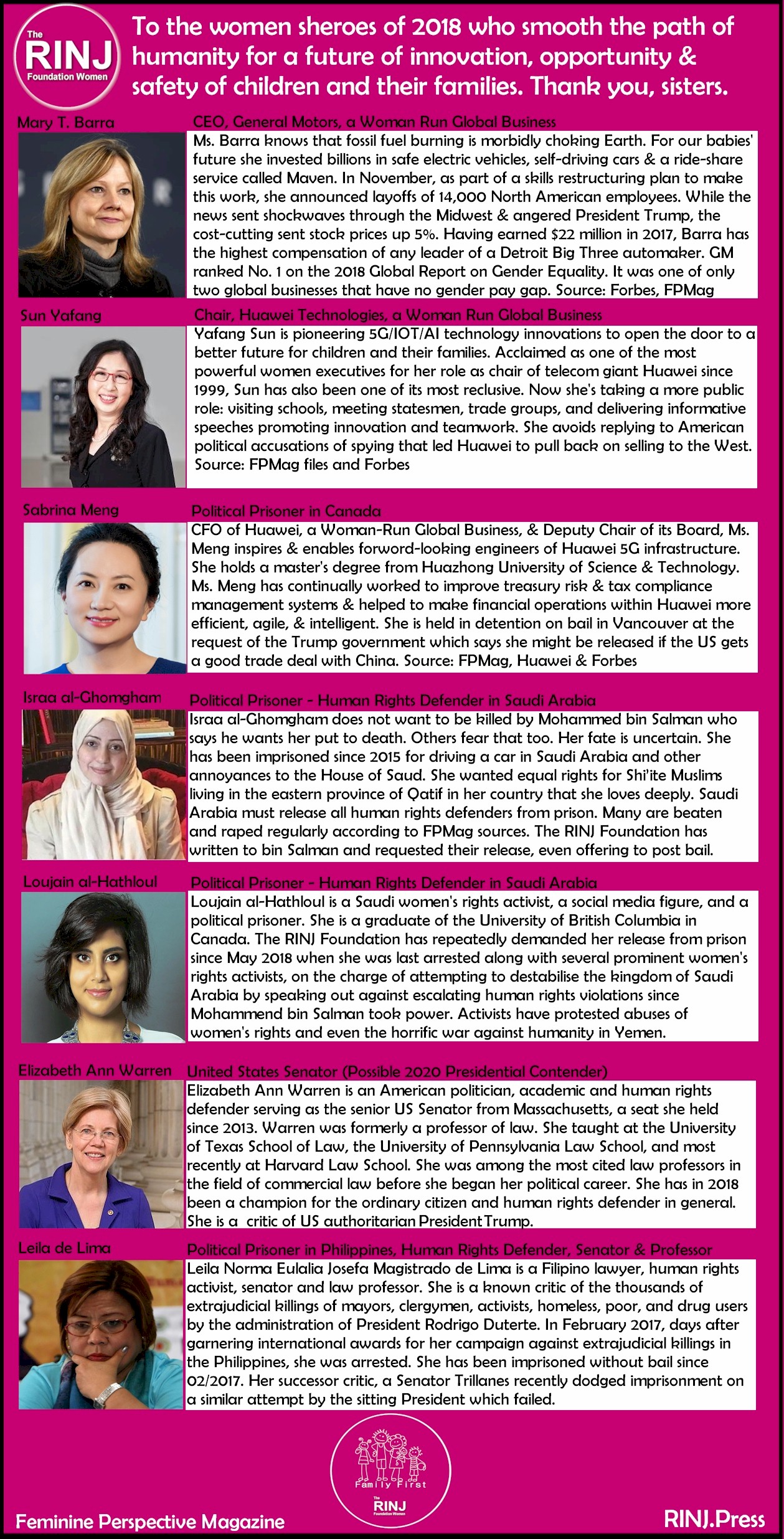 To the women sheroes of 2018 who smooth the path of humanity for a future of innovation, opportunity & safety of children and their families. Thank you, sisters. Art: Feminine Perspective Magazine Editorial Staff