White House no longer Houses leader of the free world.

Under President Donald Trump, America has lost its empathy which is not good for the world and unacceptable in a free-world leader. America is no longer trusted as such. 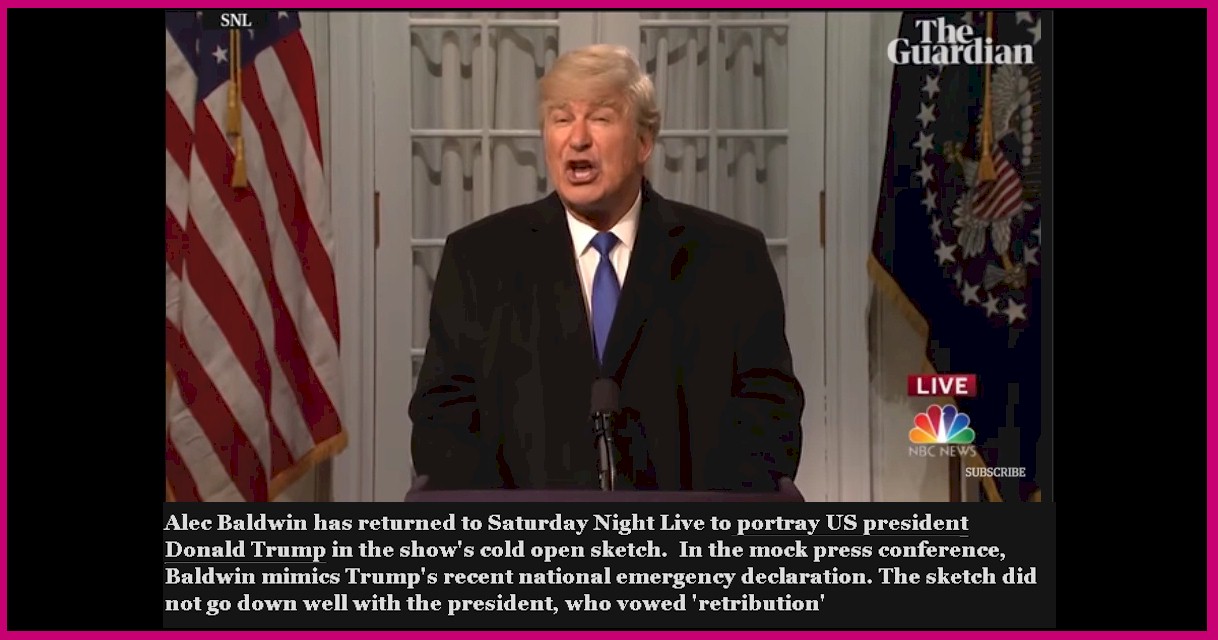 The medium carries the message: “The White House no Longer Houses a leader of the free world.” Photo Credit: Screen capture from The Guardian Mon 18 Feb 2019 01.36 GMT and including credits to NBC News Live and Saturday Night Live (NBC)

A few things have been made clear by the people of the United States lately, but the US President is on his own path, away from the people.

The United States media and to a large extent, global news media who poll in America have been trying to relay these messages, no matter that they are in fact clear enough to be understood from the publicly available evidence, even by a person like Trump with his blended narcissistic and antisocial personality disorders. Recent Twitter  tweets of Trump are emblematic of Trump’s actual intended response. He is not playing along, he is ranting like a psychotic dictator. And this is not the worst of it.

When Donald Trump promised an unorthodox presidency, he should have expected that he would become a viable, legitimate target for any and all comedians in the USA entertainment field. He should have been coached by aides to avoid baiting producers and screen writers to make things worse.

Nothing funny about tired Saturday Night Live on Fake News NBC! Question is, how do the Networks get away with these total Republican hit jobs without retribution? Likewise for many other shows? Very unfair and should be looked into. This is the real Collusion!

This cannot be faked. It is really happening. America put a buffoon in the White House.

Working as a humanitarian NGO in war zones and global troubled spots, the volunteers of The RINJ Foundation, a global civil society women’s rights group, say they work in many places around the world with American operators, soldiers, businesses and more. Their reports are that these people are fabulous partners or liaisons and that despite the change in the US government over the past two years, the people of America they meet are still the same well-educated, well-equipped and sound-minded persons. Moreover, that sort of person seems to deny ever electing Donald Trump.

THE RIGGED AND CORRUPT MEDIA IS THE ENEMY OF THE PEOPLE!

Unorthodox is not to be confused with tastelessness comprised of ‘cheapness and vulgarity’.

Donald Trump whose fame is encapsulated in a TV Series called “The Apprentice”, is in the White House as President of the United States.

His methods he promised to be unorthodox and indeed they are.

But Trump has violated numerous agreements made by the United States in previous years. The broken commitments include nuclear arms treaties and global accords on the sustainability of the Earth’s healthy environment. There is no turning back the clock on human perception of this conduct.

“America first and death to the world,” didn’t fly. America is in the dog house.

The breach of the nuclear agreement reached in 2015 with Iran is one of the more unforgivable and stupidest because it is based on racism. The same is true about Trump’s war on China.

There will be no nuclear disarmament until all countries disarm. The days of tolerating an elite “nuclear club” are long gone.

The populations of China, Iran, Russia, and North Korea have Field-of-Fire Syndrome. They feel ‘shell-shocked’, embattled, and  arm themselves to be safe.

And that was an extremely stupid betrayal of the West’s electorate by the disingenuous leadership of the so-called, self-named,”Free World” leadership.

Animosity between nations in conflict is mostly based on the deliberate fabrication of enemies and threats that help populations ignore the scurrilous kleptocratic conduct of their government leaders to focus all ails to a single external blame.

This proclivity in the United States is more complicated than just plain racism but racism is at the core of most foolish things that America collectively does.

It’s law enforcement are still slaughtering blacks in the streets; school massacres are commonplace,  and this appears to be how America does business with the world.

Millions of non-whites have been massacred by America since WWII. This country is not a global leader. Its type of conduct must not be followed, in fact it must be stopped.

The Russian, Iranian, Chinese, and North Korean people are positively beautiful people, rich in culture and with dreams that can inspire worlds, if one takes the time to hear.

“The Syndrome”
These millions of people in the Field-of-Fire of America, with Britain and Canada in tow, plus their allies, are being hit continually with degrading remarks, condemnation, innuendo, pure insults actually.

This is wrong because it is hurtful and creates a wounded-pride and willingness for retaliation. That willingness results in millions of pin-pricks of  revenge, even knife stabs by institutions, corporations, and governments against the civilians of the offending nations.

Eventually there will be war because putting a class of people into a field-of-fire is an act of war.

“Field-of-Fire”
The field of fire of weapon (s) is the area that can easily and effectively be hit by gunfire. The term field of fire is mostly used in reference to machine guns. Their fields of fire incorporate the beaten zone.

Beaten zone is a concept in indirect infantry small arms fire, specifically machine guns. It describes the area between the “first catch” and the “last graze” of a bullet’s trajectory. At the first of these points, a bullet will hit a standing man in the head, at the last of these points, as the bullet drops, it will hit a standing man in the feet. Anyone standing within the beaten zone will be hit somewhere from head to foot. (Wikipedia)

Every cliche applies. The world is round. You reap what you sow.  What goes around comes around.

The White House no Longer Houses leader of the free world.

The character of America is best reflected by the US President’s exaggerated sense of self-importance and complete lack of empathy (imagine being a member of Jamal Khashoggi’s family or a staffer at the Washington Post where Jamal worked).

Trump’s feelings of entitlement and obsessive suspicion of other people’s motivations blind him to the fact that the brilliant acting of Alec Baldwin on Saturday Night Live is a message some very intelligent people are sending. The point is that Trump will never get the message.

Lacking the compunction necessary to earn America’s goals therefore predisposed to violently taking what it wants, like oil and gold, Trump is driving America into Venezuela and that puts him on a dangerous collision course with Russia, Iran and China–maybe Europe too.

America’s White House is not a leader of the free world, it is a pariah and soon must be dealt with.

Get used to the word, “No”, America, until you clear up the mess in the White House. Good luck with that, sincerely.