‘Hong Kong Future must be decided by people not guns.’

I could hear the witness pounding her fist on a table as I spoke to her by phone. She had just been speaking of the violent tactics of Hong Kong Police against pacifist Hong Kong students.

“Hong Kong future must be decided by people, not guns,” she said forcefully. 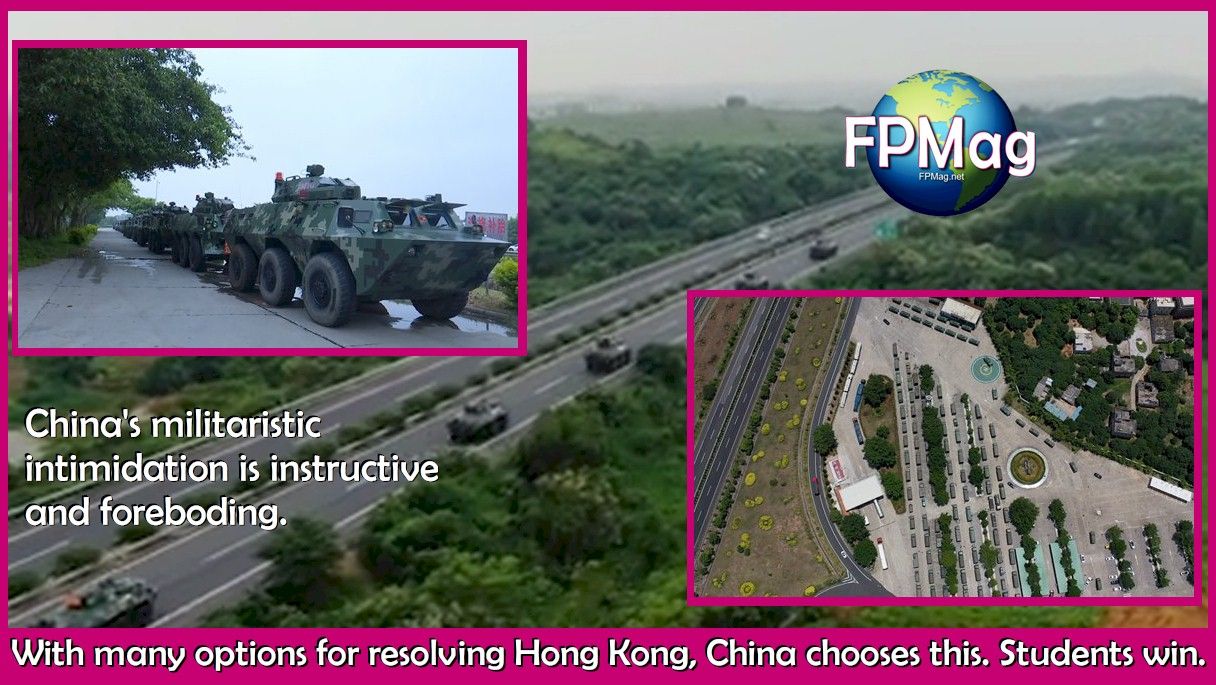 Military buildup in Shenzen north of Hong Kong, as a response and a threat to student protests in Hong Kong is suggesting the students were justified in their claims of oppressiveness, right from the start. With many options for resolving Hong Kong, China chooses this. Students win.
Photo Art: Rosa Yamamoto FPMag

Her children have been involved in the recent peaceful demonstrations in Hong Kong. That is why she does not wish to be identified in this article for fear of reprisals against her son and daughter. She is not alone in those fears. Other mothers have raised the same concerns.

Meanwhile, this particular lady is on her way out the door to transfer large amounts of money, coming years’ tuition, from the HSBC Hong Kong Bank to Chase Bank in the United States.

She explained, “my children are asking all the students and faculty in Hong Kong to withdraw their money or convert it to US dollars. I am doing both because we have an apartment in New York City and a bank account there.”

When asked if she wished her two student children stay away from the protests, she very firmly said, “I am very proud of them and their friends!”

“I don’t want to say more, she added”

She is a Hong Kong observer for FPMag inside Hong Kong and a member of The RINJ Foundation, a global civil society women’s group.

She is now very afraid for the future. Beijing is both angering and terrifying the people of Hong Kong who are in the streets demonstrating and saying from the start that this draconian conduct is all they get from Beijing. Point taken. At least four similar sources confirm the sentiments and also the resolve.

Beijing should listen? The people say they “are speaking”. But making a judgment on recent events, several casual sources say “Xi Jinping does not seem to think the people have  rights”.

In light of unfolding military events surrounding Hong Kong , like an invasion preparation, the Chinese government’s statements of Thursday are beyond outrageous and categorically worrisome for the entire world. If this is the China that Xi Kinping is building, the whole world needs to do a double take.

China, in a different style from America also has a history of extreme human rights abuses that have been sidestepped by much of the global patriarch when China’s ‘explainers‘ wax eloquently and bump up their purchasing power.  In the Hong Kong matter, that is not going to fly, say the somewhat disorganized student protesters.

“The spokesperson for the Office of the United Nations High Commissioner for Human Rights (OHCHR) made a wrongful statement on Hong Kong that contradicts the facts,” said the Chinese Mission to the United Nations (UN) at Geneva, on Tuesday, 13 August.

In fact, Rupert Colville is the referenced spokesperson for U.N. High Commissioner for Human Rights Michelle Bachelet.  His statement was that Michelle Bachelet had reviewed evidence that police are using “less-lethal weapons” in ways that are prohibited by international norms and standards, shooting tear gas into crowded, enclosed spaces and directly at individuals, “creating a considerable risk of death or serious injury,” Colville said in a statement.

It was Hong Kong police Mr. Colville said he was referring to but Beijing has been speaking as if it defends the actions of mainland police.  Beijing now stands accused of using mainland police from Guangdong Province plus federal operatives  to create violent episodes in Hong Kong, thereafter using images of that violence to justify allegations of terrorism against the kids protesting in Hong Kong.

According to Beijing’s official public relations mouthpiece, and occasionally eloquent Global Times,  “In a spokesperson’s remarks issued Tuesday afternoon, the Chinese mission said that the UN rights body’s statement interferes in what is happening in Hong Kong, which is China’s domestic affairs, and sends the wrong signal to the violent criminal offenders.”

But the “violent criminal offenders” have been proven to be Beijing-instructed malign actors, conducting violence which in videos from Hong Kong compares to police training videos of some of the same persons using batons to harm suspects.

FPMag editors have been pushing sources for a resolution on the question, “who were the ‘white shirts‘ group and who were the ringleaders of violence against a Hong Kong administration building?

On Tuesday, one of these persons was in the custody of students at HK International Airport. 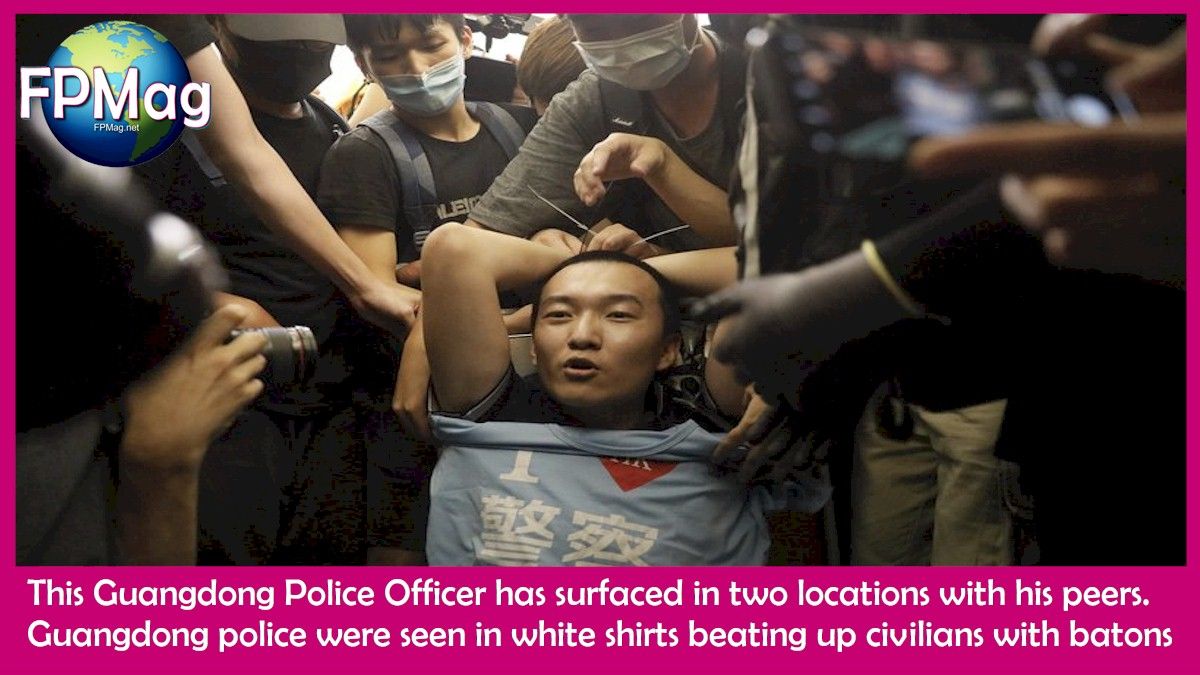 Is this a past nightmare returning? A bad joke? 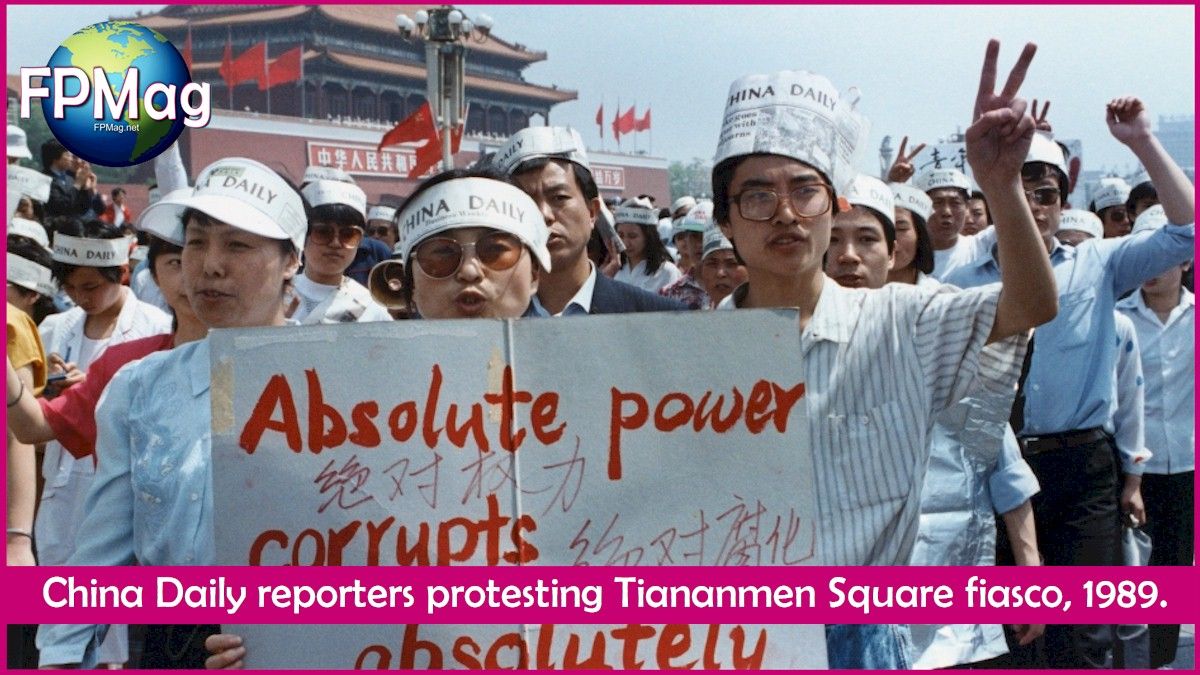 The world just passed a milestone, that being the 30th remembrance of the Tiananmen Square massacre. Between 3 & 4 June 1989, the Chinese military began to clear Tiananmen Square, killing hundreds of student protesters in the process.

Says Monique Deslauriers a nurse with The RINJ Foundation, a global women’s civil society group, “many elderly members of our group lost children in those days”.

She continued in a phone conversation to say that she has been speaking to the group’s members in Hong Kong and there is a definite resurgence of that fear among younger moms who have children in school.

“They are following their hearts and minds plus intelligent urging of professors and student union leaders to peacefully protest in favour of a more democratic structuring of Hong Kong,” noted Deslauriers.  “Freedom, and human rights, in other words.” she added.

Even the United States President Trump who has reportedly no comprehension nor care about human rights, says that China needs to handle the matter humanely. Donald Trump has suggested a meeting between Xi Jinping and protest leaders.

If President Xi would meet directly and personally with the protesters, there would be a happy and enlightened ending to the Hong Kong problem. I have no doubt! https://t.co/eFxMjgsG1K

FPMag is in Hong Kong and will continue to report on events.