HIV: Despair must leave the room. Mabuhay! [In depth]

The old material one can read about HIV could blow your mind. Don’t let that happen. The stigma is getting tiresome too. The nicest of people get HIV. Patients don’t need someone to hold their hand to do an HIV test.

“Positive” is no longer a death sentence and hasn’t been such for a very long time. Patients do not need a psychiatrist or a Priest/Rabbi. They need to be tested regularly if having experienced a high risk event. If they test positive, they must start treatment no matter what news headlines tell. But soon, HIV is going down for the count. The referee is on the mat and the first fist is down.

Get tested then start treatment if diagnosed. This has never been more important.

“Paranoia creates that,” she added. “More people fear they have HIV than those who test positive, in our experience. You don’t get HIV from normal kissing of a person, but some people are terrified that it is possible that could happen. ‘Get tested and put it out of your mind’, is the best advise to give anyone.” 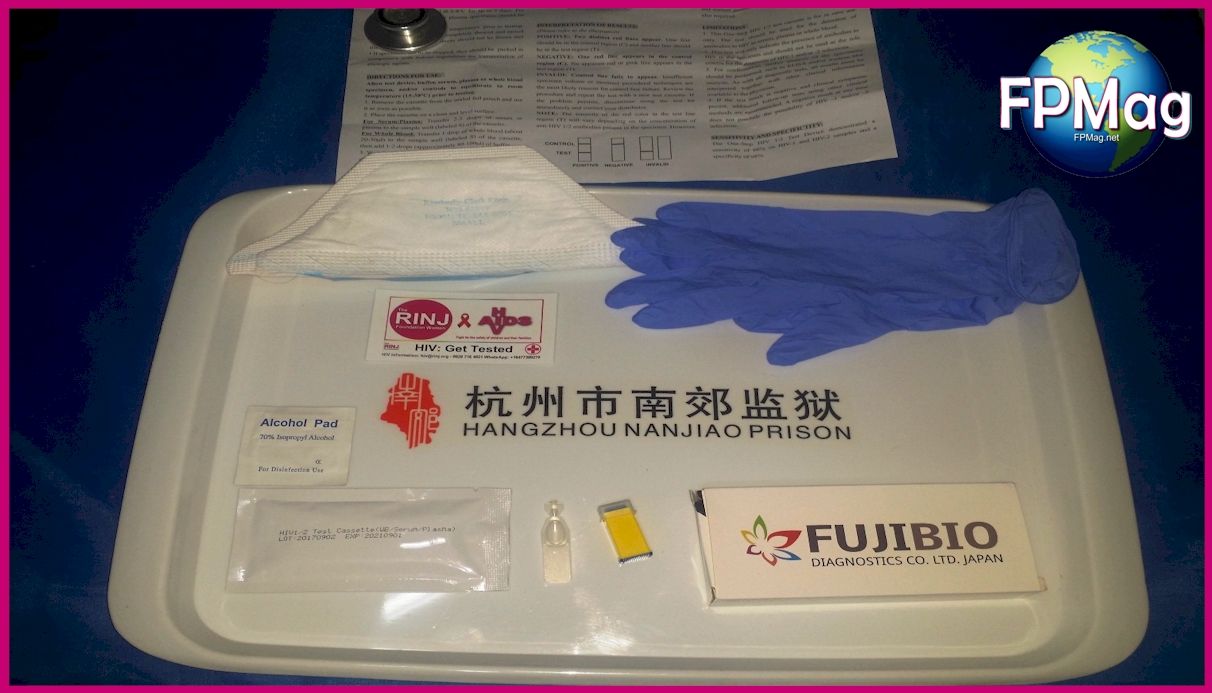 Get tested! The medical workers at RINJ say, “Much of our work is teaching. And we’ll go anywhere people want to learn”. Photo Credit: Sharon Santiago FPMag

An HIV-infected person needs only one thing, treatment and chronic care.

If HIV positive the patient has a chronic illness until a cure is found. That day of cure we are entitled on the evidence to believe will come some time after the early vaccines become available. They could be seen “on the shelf” within 18 to 24 months, maybe more or maybe less.

“Ask your doctor to ask his pharmaceutical and government contacts. Keep the pressure up,” says Nurse Michele.

Michele Francis, an RSAC nurse working in South America tells FPMag that HIV should be treated like any other chronic illness regardless of hopeful vaccines and cures.

“Other examples of chronic illness.” Nurse Francis noted,  “are high blood pressure and diabetes. Patients must get treatment for chronic illness to stay healthy. That includes HIV which is usually only morbid if untreated, like other chronic illness,” she added.

“If a person learns they are infected with HIV, the treatment is simple, easy and extremely effective.  75 Out of 100  suppress the virus completely on the first try. There are a number of medications available and each patient responds a little differently, she stresses.”

Mono therapy is becoming a thing of the past, says  Elizabeth Boskey, PhD.

Some people have started out with a single medicine and not got the desired result until they tried multiple medicines. Learning by experience, doctors and researchers believe that multiple medicines (cART) in smaller doses with fewer side effects are a more effective approach for some patients. This has been true for other chronic illness like hypertensive heart disease.

According to the US Department of Health and Human Services, “AntiRetroviral Therapy (ART) reduces a person’s viral load (HIV RNA) to an undetectable level.”

The Department warns emphatically that, “Viral suppression does not mean a person is cured; HIV still remains in the body. If ART is discontinued, the person’s viral load will likely return to a detectable level.” 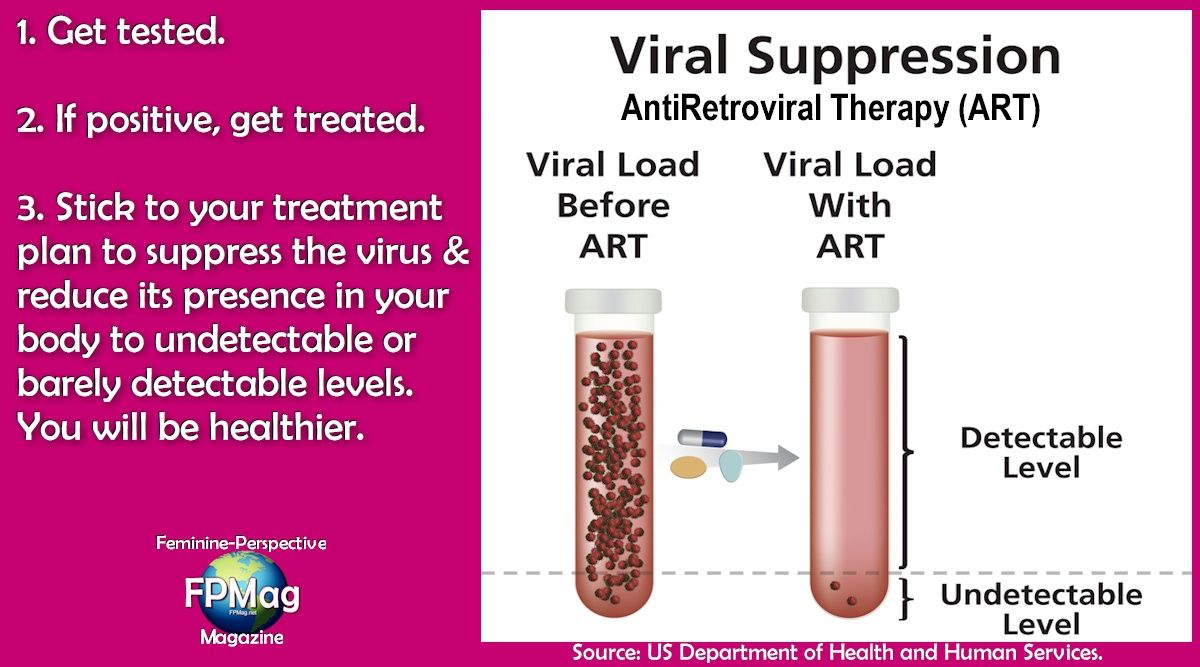 1. Get tested.
2. If positive, get treated.
3. Stick to your treatment plan to suppress the virus & reduce its presence in your body to undetectable or barely detectable levels.
You will be healthier.
Source: US Department of Health and Human Services.
Photo Art: Rosa Yamamoto FPMag

Patients absolutely MUST get treated and stay healthy waiting for a complete cure. DON’t just wait for a cure. Anything can happen, none of it good. If you let this go and don’t take action, all you are doing is walking under a bus. Such a person could benefit from a mental health appointment but that is not the HIV. Depression can also hit anyone.

FPMag has been talking to hands-on experts working in the jungles and the mountains of developing nations and they have a lot to say.

“You are not going to die from HIV. HIV has had its butt kicked and it will soon go down for the count,” says Syrian Dr. Buni, stoically.

You will be reducing the function and replication of the HIV virus. Your health care practitioner will want to diminish your viral load to minimal copies of HIV per milliliter of blood. A successful suppression of the viral load leaves undetectable levels of virus in your blood.

“In 150,000 cases, there has been no transmission of the virus from persons who have achieved viral suppression,” noted Dr. Anthony Fauci at the recently concluded IAS Conference. Dr. Fauci is the Director of NIH’s National Institute of Allergy and Infectious Diseases.

Vaccines are under development and many are in second and third trial phases. That’s not a cure but if you are infected with a variant of the virus, you don’t want another type of HIV.

Vaccines are important to patients already infected because a vaccine will afford protection to your family and significant other. The best protection is to suppress ones own virus. But brace yourself. Another breakthrough is quite shattering.

Antiretroviral therapy could be obsolete someday, as scientists have successfully used immune cells to kick the dormant form of HIV out of its hiding place and destroy it. These findings may soon lead to an HIV vaccine that also has benefits for patients who have achieved virus suppression.

From this day forward it is quite unlikely you will die from HIV if you have recently been infected; get tested; and start treatment. If you have had any kind of risk incident, get tested. Get tested again until at least three months have passed since the incident. If positive, start treatment. If negative, stop scaring yourself and follow the ABCs of prevention listed in this article.

You have somewhere around a 76% chance of complete virus suppression when you start treatment immediately after testing positive and stay with your treatment plan and medical care. A lessor result could include slightly detectable levels of the virus in your blood. From there your doctor might adjust your medicine and fetch you the result you want.

(You can download this and do the quiz later if you wish.)

ABC’s is an Exerpt from https://rinj.org/interactive/hiv-aids/

*A is for abstinence. Abstain from any sexual contact unless you have a monogamous partner. Fidelity might be for some people a religious, moral or loyalty issue but for public health and for you, it is a life and death issue.
*B, hence, is for Be faithful to your monogamous partner.
*C is for Condom. It is an effective shield against the HIV virus. Unless you know from valid HIV/AIDS testing your sex partner is negative, use a condom. It’s that simple.
*D is for Don’t re-use needles.
*E is for Educate yourself and continue to learn about prevention and treatment breakthroughs.

What are your symptoms?

Most people may develop symptoms similar to flu, 2–6 weeks after catching the virus. This is called acute retroviral syndrome. The symptoms of early HIV infection may include:

It is important to remember that these symptoms appear when the body is fighting off many other types of viruses, not just HIV. However, if you have several of these symptoms and believe you could have been at risk of contracting HIV in the last few weeks, you should take a test

With pharmacological prophylaxis, halt the progress of the virus.

Notes of great encouragement worth learning about.

Five thousand experts from 140 countries came together this July past, with answers. Mabuhay.

Better combinations of medications are being formed into single pills taken one per day is a big takeway from the biennial IAS Conference that concluded at the end of July.

Watch a summary of the 10th (2019) IAS Conference which concluded 15 July in Mexico City. The biennial IAS Conference on HIV Science  is the largest open scientific conference on HIV and this year assembled more than 5,000 participants from more than 140 countries. This conference presents the latest critical advances in basic, clinical, and operational research that move science into policy and practice. Findings from research supported by the NIH as well as the Centers for Disease Control and Prevention and USAID were among the more than 1,000 abstracts  presented.

Meanwhile from Nairobi to Saskatoon, scientists are working on various vaccines to prevent HIV.

Other studies and tests seek to REMOVE the HIV virus from a human body. Believe it or not, successful gene manipulation has already worked to remove HIV from mice. This was accomplished by a Kenyan professor working at the University of Nebraska in the USA. The same accomplishment has been achieved using different methods in another laboratory.

FPMag is watching and will keep readers posted.

A clinical trial named the ‘IAVI W001 trial’ is now being conducted in Kenya. The vaccine candidate dubbed BG505 SOSIP is a molecule cloned to resemble HIV. It will be tested on Kenyan volunteers to check for safety and efficacy.

The Chinese Center for Disease Control and Prevention (CCDCP) of Beijing has been working on an HIV vaccine since first trials in 2007. The vaccine is called DNA-rTV and, in this second phase of human trials, researchers are testing the replication of the DNA of HIV in order to trigger the immunization.

An American project called HVTN 706  has been developing for 15-years. HVTN 706 involves the US National Institutes of Health (NIH); the HIV Vaccine Trials Network headquartered at the Fred Hutchinson Cancer Research Center; the US Army Medical Research and Development Command; and the private sector firm, Janssen div. of Johnson & Johnson.

You can beat HIV. Before long, new solutions will be discovered and you can avail those as they are tested and evolving. Meanwhile you can suppress the virus in your body. Stop it in its tracks.

The Enemy is a Virus. Achieve viral suppression!

Each “germ” is so small they can only be seen under a strong microscope. But you can study the virus here:

Most viruses hijack red blood cells to clone themselves. HIV is different and more sinister.

Think of this: about 200 different viruses can cause what we refer to as a “cold.” Many others cause the flu, chicken pox, polio, measles, mumps, and a variety of other diseases. There are no cures for viruses and most are fought by your body’s immune system. For many serious diseases, medical scientists have developed vaccines to prevent your body from getting the disease in the first place.

HIV is awaiting such a vaccine. More dialogue; more testing; and more prevention will help the process. Let’s openly talk about HIV. Let’s encourage the development of a vaccine.

Most importantly, every single person infected with the virus must start treatment.

Regardless of the News reports of Vaccines and Breakthroughs Start treatment immediately upon learning you are HIV Positive.

You can live a normal life with pharmacological assistance (medicine). Do this while you wait for a cure. See your MD or specialist ASAP and have your meds prescribed. Start treatment. Do not let your HIV infection become AIDS. A vaccine is in the works and a cure for HIV may also be imminent. Stay as healthy as possible until then.

These medications are some conversation starters (or explanations) with your health care provider. Remember this may change as more discoveries emerge from completion of testing.

In many cases, people now may take more than one medicine, each with lower doses.

Go today and get tested or test yourself. If positive, start treatment.

Watch and learn about self testing.