Good people of Venezuela should flee the country.

Venezuelans who can make it to safety outside of Venezuela should go. Sadly, that is the truth that must, in all honesty, be told.

You can’t get water, medicine, food? Flee. You can’t find safety from looters? Get out. You are at risk of being imprisoned by the military junta? Get out. As the resistance to Maduro’s military junta increases, the well-equipped military and para-military will turn all its weapons on the civilians. Get out now if you can.

Ironically that is the same life-saving advice RINJ gave Moslawis in 2014-2016.

Leave carefully, invisibly and fast. Everything you do must be aligned to this goal.  Worry less about where you are going and more about surviving at each moment. You are going to rely on other people once you are out. Make a white flag. Stick it in a pocket.  It is the international symbol of no-conflict.

Sometimes when a journo learns something and comes to “know it” regardless of being able to “prove it”, and when that thing threatens millions of lives, should they report what they cannot prove, like deja vu? 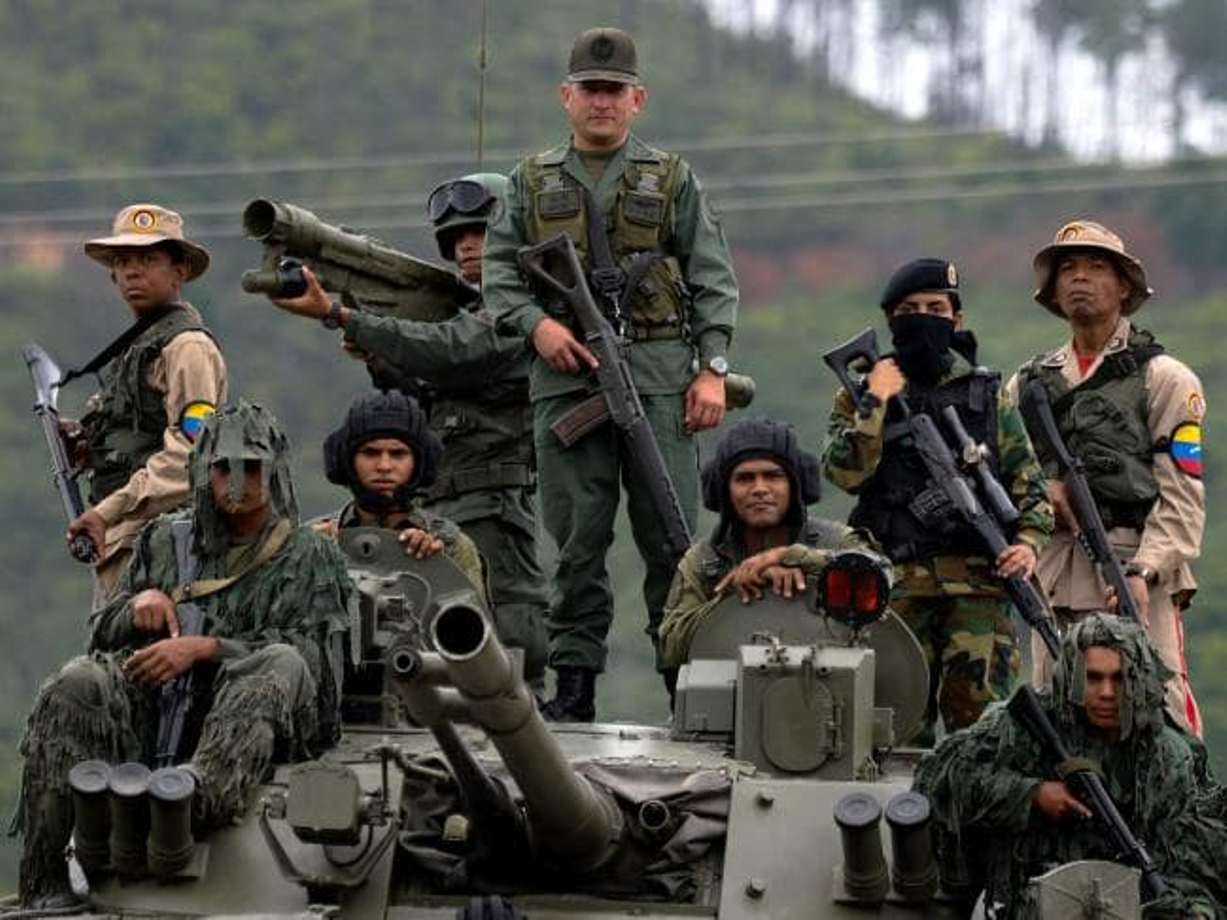 The Attacks on Juan Guaidó sound like Russian LawFare

But “Cowardly, miserable and murderous regime” are the words of Juan Guaidó, the lawful President of Venezuela when the past-president who refused to leave office when his time was up in January, Nicolás Maduro’s appointed illegal officials removed Parliamentary immunity for Mr. Guaido.

The Venezuelan interim President’s reaction was to say that Maduro was leading a “Cowardly, miserable and murderous regime,” and that he would continue to fight for the people of Venezuela for freedom from the onerous dictatorship of Maduros, propped up by Russia.

That’s another matter. Russia is selling weapons to Maduro of Venezuela, a brutal dictatorship that has mined its population for every piece of gold, even taking it from the teeth of the people it has imprisoned then killed, says a mortuary worker who does not wish to be identified but is close to one of the many thousands of RINJ Foundation Women in Venezuela. 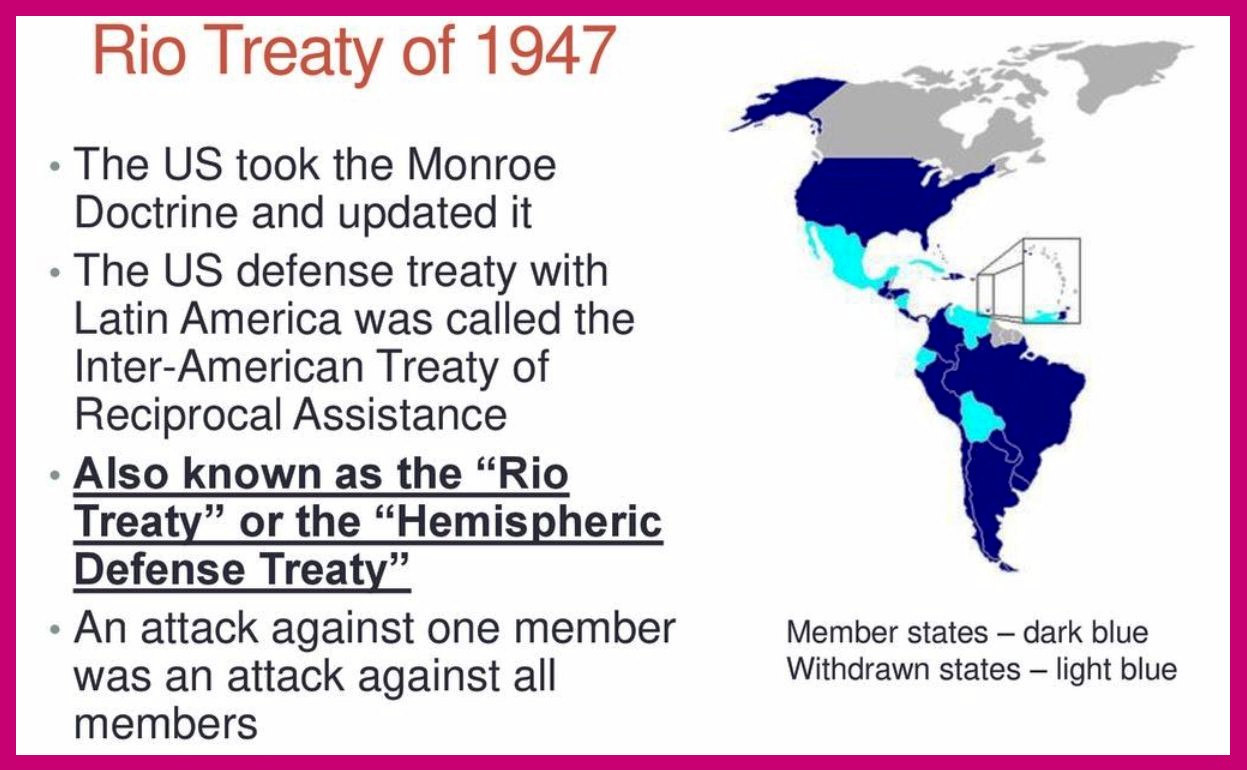 Donald Trump needs to Grow a Pair and Stand Up to Putin. The USA is in serious trouble. Going to war against the infiltrators of Venezuela is no longer an option, it is essential to the future of the Western Hemisphere.

Of late, the ordinary people of the world have been compelled by force of brutality to accept the bullying of despotic leaders. Venezuela is the straw to break the camel’s back.

They don’t love Venezuela and they do not see themselves bailing out this bottomless money pit with its outrageously collapsed infrastructure and economy. The areas wherein the Chavez/Maduro regimes have siphoned the nation’s wealth are still yet to be exposed. But the health care system, power generation and distribution, water treatment, roads and bridges, sewage, food distribution and law enforcement have all collapsed. Looting is everywhere. Patients are dying BECAUSE THEY WENT TO A HOSPITAL.

Recep Erdogan, Bashar al-Assad, Vladimir Putin, Miguel Díaz-Canel, Evo Morales and Daniel Ortega — none of these people is acting in the interest of the people of Venezuela but instead are part of the plundering of the country, stupidly backing the wet dreams of an old old man running the Kremlin. Putin’s swan song will be a decimating firestorm across the Western Hemisphere, more importantly the destruction of the North from the South.

Recep Erdogan, Bashar al-Assad, Vladimir Putin, Miguel Díaz-Canel, Evo Morales and Daniel Ortega are in Venezuela up to their eyebrows and must be cleaned out.

It Will Be an Ugly War

At some point the people of the world, the ordinary people, must say that enough is enough. The rapes, murders, attacks on the press, the disappearances, detentions, torture… enough is enough. The tolerance lines are crossed. Yes, war and even death is better than the complete loss of freedom by ordinary people to ruthless men without a conscience.

Cuba has roughly a thousand troops in Venezuela. They have been around for some time and are ruthless gangsters who have robbed medical supplies The RINJ Foundation has brought into the country, among other misconducts.

It goes on and on. Recep Erdogan, Bashar al-Assad, Vladimir Putin, Miguel Díaz-Canel, Evo Morales and Daniel Ortega are just a few of the people with their hands in the Venezuelan cash register.

Russia has been selling Maduros a wack of military equipment, $billions worth that the Kremlin  believes suitable for building a weaponized puppet against the United States.

What Vladimir Putin and his colleagues in the Kremlin have  is a stupid flunky, Nicolás Maduro, to arm his country as a surrogate to Russia in a future war against the United States.

With his sins Maduros is extremely easy to blackmail and manipulate by Putin. The blind, toxic greed of Diosdado Cabello, Tareck el Aissami, Cilia Flores de Maduro, Nicolás Maduro Guerra, who actually run the Maduro Junta are so deep into the pockets of Russia there is no coming back for them. They either tow the Kremlin line or their brains become a pink mist.

War is imminent. Make no mistake about it.

Vladimir Putin’s greed coupled with a villainous strategy with sinister intent against the people of the Western Hemisphere has assured the worst.

Venezuela has drawn to itself some of the worst scum on Earth. Recep Erdogan, Bashar al-Assad, Vladimir Putin, Miguel Díaz-Canel, Evo Morales and Daniel Ortega.

The greatest gift to mankind would be to put all of these thugs in a single room together with a few others. If that didn’t attract a lightning bolt, nothing could.

The aim of Maduro’s scared and oppressed lawfare officials is to arrest President Juan Guaidó for leaving the country to confer with the American Vice-President, Mike Pence and President Iván Duque Márquez of Colombia.

Hopefully at least Mike Pence is preparing to give the “kill or capture” order against the ‘evildoers’ who are destroying tens of millions of ordinary lives as an exchange for lining their own purses.

In the meantime, Venezuelans who can make it to safety outside of Venezuela should go. Sadly, that is the truth that must, in all honesty, be told. 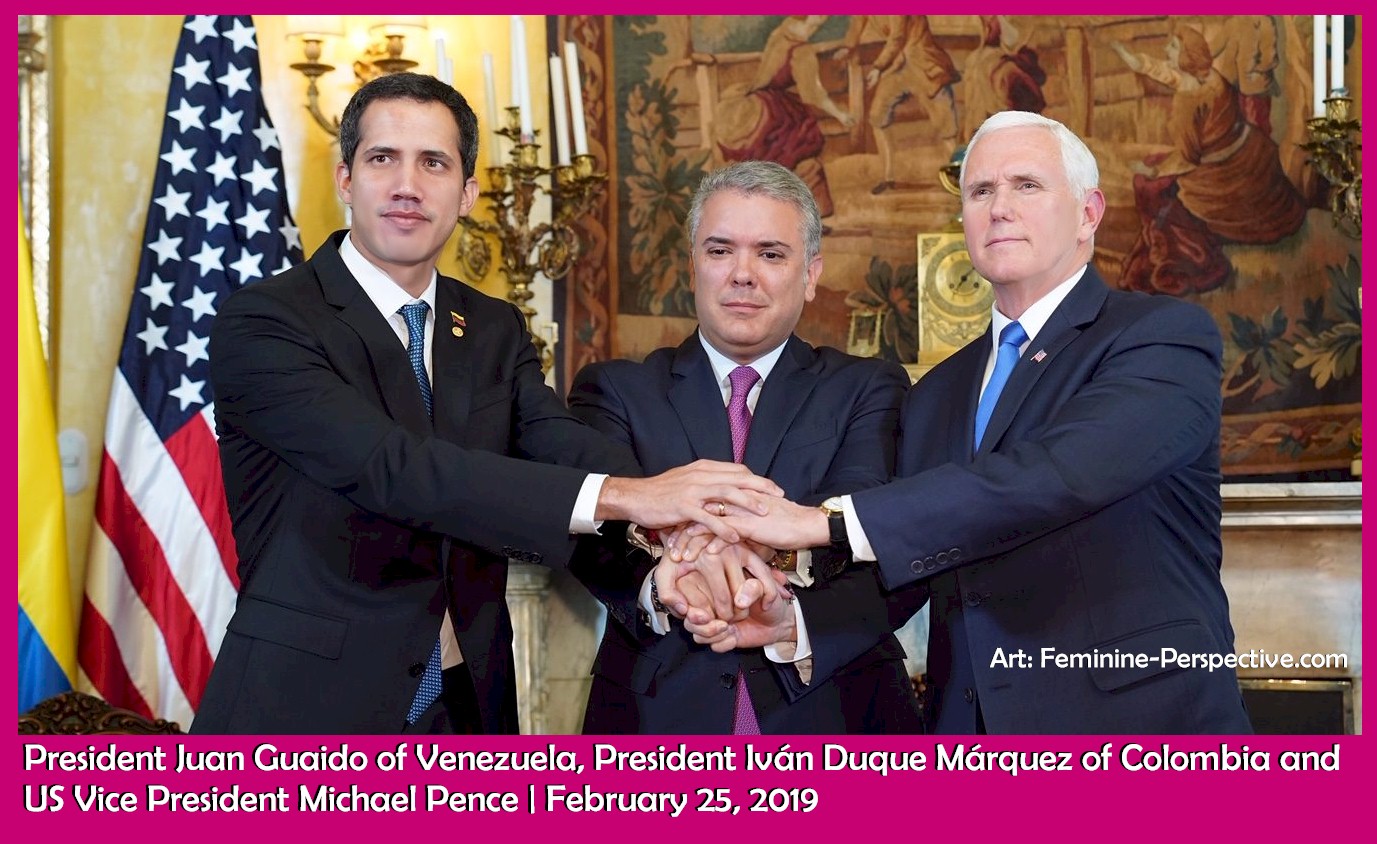 This is how it is

Vice President Mike Pence, President Juan Guaido of Venezuela, and President Iván Duque Márquez of Colombia confered together on February 25, 2019 in Colombia. The illegal Military Junta dictatorship of Nicolás Maduro’s Cartel of the Suns wants to kidnap President Juan Guaido for having exercised his Universal Human Right to travel and confer with any persons of his choosing. That cannot stand. Maduro must be apprehended to prevent this crime.

The Venezuelan Military and or Para-Military needs to step up to the rule of law and shut down this hierarchy of crime or eventually face the wrath of the world and maybe a firing squad or the gallows.

Don’t forget Nuremberg. Eventually the citizens of the world speak aloud with a strong collective voice.

This is also how it is. 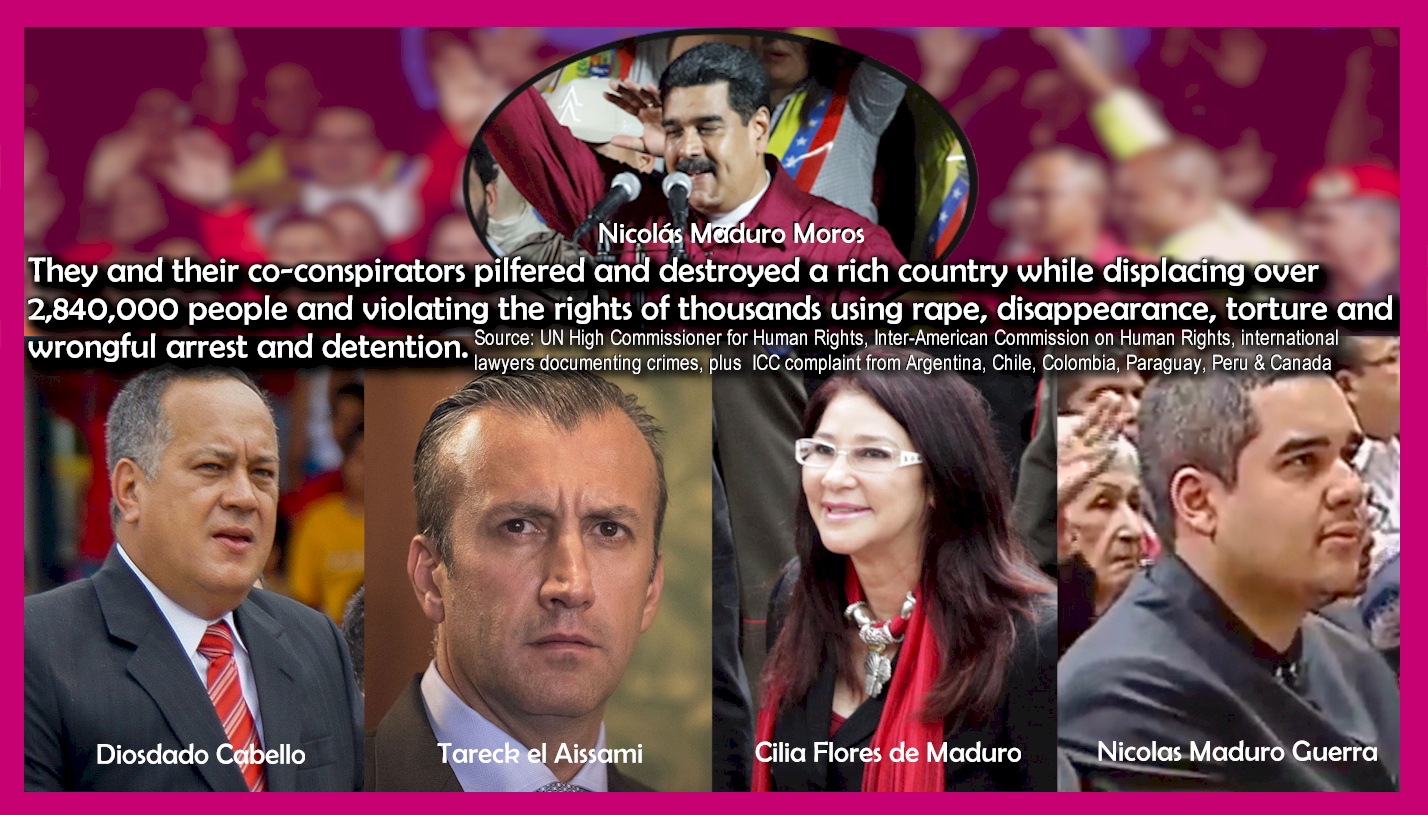